<img src="https://www.qromag.com/wp-content/uploads/2010/09/ofmontrealfalsepriest.jpg" alt=" " /><i>False Priest </i>not only delivers as a solid album, but also furthermore proves that of Montreal still have a lot of life left in them.... 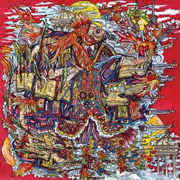 Consistency and longevity are words often undervalued in the music world.  The perpetual and obsessive search for the ‘next big thing’ has created (what I like to call) a "debut generation".  Most current artists don’t make it past the debut, and many listeners simply refuse to commit to an act long enough to see them past album number one.  This has resulted in record labels furiously hiring and firing – churning out debut after debut.

False Priest is of Montreal’s tenth studio album.  Let’s just pause for a minute, and appreciate and celebrate the band for making it this far.

Now there are many reasons why False Priest should not work.  First, frontman Kevin Barnes (QRO solo photos) announced that this was to be of Montreal’s most dance and R&B record to date – which, if you were privy to the occasional missteps of 2008’s Skeletal Lamping or 2007’s Hissing Fauna, Are You the Destroyer? (QRO review), you would know is not a good thing.  Add to that, odd collaborations (Beyoncé’s little sister), Barnes’ battles with depression and borderline insane lyrical content, False Priest could have gone very wrong.  But for some reason it doesn’t.  Perhaps it is all the good karma of Montreal has accumulated over the course of their long career, or perhaps it is that of Montreal seems incapable of making a bad album (no matter how hard they try).

With stellar production from Jon Brion, this is without doubt of Montreal’s most accessible record.  Whilst their previous recordings were forced to wade and sink in the inescapable grit of lo-fi and low budget recording, False Priest is given the fidelity it deserves.

Lead single "Coquet Coquette" sees of Montreal at its best: obscure yet beautiful, nonsensical yet insightful, and completely covered in a thick layer of sonic haze.  The female vocal accompaniment works well throughout ("Our Riotous Defects" and "Sex Karma") but as usual it is Kevin Barnes’ show.  Barnes is the Technicolor ringmaster beckoning you to enter his demented yet charming funhouse.  Barnes’ musings are so personal and interior monologue-ish, that sometimes deep and meaningful sentiments are lost in heady brew of nonsensical phrasing.

"Godly Intersex", "Enemy Gene", and "Hydra Fancies" showcase Barnes at his peak.  These three consecutive tracks give Barnes ample room to dazzle with impressive vocals and even more impressive emotional resonance.  With ambitious instrumentation, Prince-like melodies and strong lyrical content, False Priest not only delivers as a solid album, but also furthermore proves that of Montreal still have a lot of life left in them.