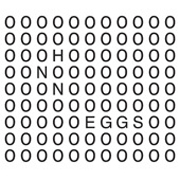 In 2031 when the ‘Indie Music’ version of Trivial Pursuit is finally released, knowing about Oh No Ono is going to win you the final piece of your pie.  Everyone else will be waiting for easy questions about Beck, Modest Mouse and Nirvana while you steal the victory by remembering which country Oh No Ono calls home (Denmark, don’t forget).  The Scandinavian five-piece seems built for obscurity, crafting music on their latest release Eggs that is equally accomplished, wondrous and inaccessible.  But ‘accessibility’ is often a codeword for terrible, terrible music, so you have to give the Danes credit.  Oh No Ono never sells out on its own style and for that reason it’s a true band’s band.

What is ‘a band’s band’?  The short answer is that it’s a band that you don’t want to listen to.  But since the QRO reader is smarter than your average bear, we’ll expand on the point.

A band’s band is a band that pushes the traditional notions of what popular music is supposed to sound like.  A band’s band breaks new ground, breaks on through to the other side, and breaks the hearts of risk-averse music execs.  Experimentation fishes up a lot of new exotic possibilities, but can be difficult to market.  Other bands eat this up, poaching a queer sound here or there to incorporate into their own more commercial-friendly tunes.  The result is a strange cultural dynamic where you get a lot of taste-making bands giving shout outs to obscure marginal ensembles that the mainstream (of indie, or otherwise) don’t like, and never will.

How many people actually like Captain Beefheart, or Frank Zappa, or Lou Reed’s Metal Machine Music?  Imagine that number in your head: now subtract the people who haven’t actually bought their music; then subtract the people who own the albums, but never listen to them; finally subtract the people who listen, but habitually listen to music they dislike just to prove a point to themselves and others.  You’re left with a very small number of individuals who take an honest, visceral pleasure in the cosmic noodlings of the Cap’n, et al.  Not enough to fill your average club, but when Oh No Ono rolls into town you can bet it’s going to be a full house.

How can this be?  Eggs is downright bizarre.  "Icicles" is dandified unlistenable dreck.  "The Tea Party" sounds like the rejected theme song for Disney-on-Ice.  The closer "Beelitz" is a ten minute long Broadway musical-style glut of over-orchestration and over-indulgence, capped off with three minutes of electronic mumbling.  Oh No Ono clearly knows what it’s up to because the only songs off the album available for public consumption on MySpace are "Helplessly Young", "Internet Warrior" and "Swim" – three songs that roughly approximate what this band could produce if they reeled in the weirdness: intricate but not glutted, far out pop orchestrations with attractive melodies.  "Swim" is especially notable.  Constructed out of some time signature that probably hasn’t seen the light of day since the Middle Ages, the song still manages to be relevant and appealing.

Oh No Ono was recently on a bill with Hooray For Earth (QRO live review).  A comparison between the two bands is instructive.  Both are über-talented ensembles with mad scientist capabilities in the studio.  But for every weirdo "Scaling"-type song that HFE churns out, they give the listener at least four more that are keepers, plus an instant classic like "Surrounded By Your Friends".  What does Eggs give us?  One cool track in "Swim"; a few high points in "Eleanor"; and a boatload of intriguing, yet totally cold and alienating Icescape theme songs.  Tweet-outs from bands like Zambri ("listening to @Oh_No_Ono ‘s Swim on repeat" – QRO photos) might get people in the club to see the band, and maybe a few will even buy the album.  But how many of these people will ever pull the record off the shelf and put it on their turntable?  Probably about as many people as can listen to Metal Machine Music all the way through.

The Album Leaf : A Chorus of Storytellers