OK Go : Of the Blue Colour of the Sky 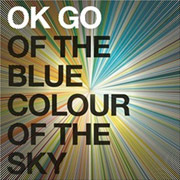 Chicago’s OK Go have had their ‘alt-moments’, like serving as house band for the 20th anniversary tour of Ira Glass’ This American Life, or making the video for 2005’s "A Million Ways" for only ten dollars – without the approval or even knowledge of their label.  But that label is major imprint Capitol, and that video & especially the one for the subsequent "Here It Goes Again" (QRO live video) went massively viral, to the point where the band performed the choreographed, one-take dance on treadmills of "Here" live at the 2006 MTV Music Video Awards.  They’re really a mainstream pop-rock-electronic band, and go more electronic – and funky – on their latest, Of the Blue Colour of the Sky, but are still just okay.

Opener/single "WTF?" introduces a funkier, more dance-friendly OK Go, with high vocals and synths, and it comes out again & again, like on mid-record, back-to-back-to-back "White Knuckles", "I Want You So Bad I Can’t Breathe" and "End Love".  It’s not bad, but ultimately forgettable (and the funk is pretty white…).  They vary the electronica somewhat, such as the restraint on "End Love", sad backbeat to "Skyscrapers", and procession in closer "In the Glass", but the only track that really stands out is "Needing/Getting" – and that’s because the piece feels like somewhere between a poor man’s TV On the Radio (QRO live review), which is still pretty good, and a pale imitation.

It isn’t all electronic on Blue Colour, but the songs that aren’t are still mainstream & mostly middling.  The indie-pop bigness of "This Too Shall Pass" has some quality, as does the relaxed, enjoyable rhythm to "Back From Kathmandu", but your memory of the high love-pop of "All Is Not Lost" is easy to lose, and acoustic emo-heart "Last Leaf" stands out, and not in a good way.  Saying "OK Go is just okay" is a weak, blatant pun, but it’s true.