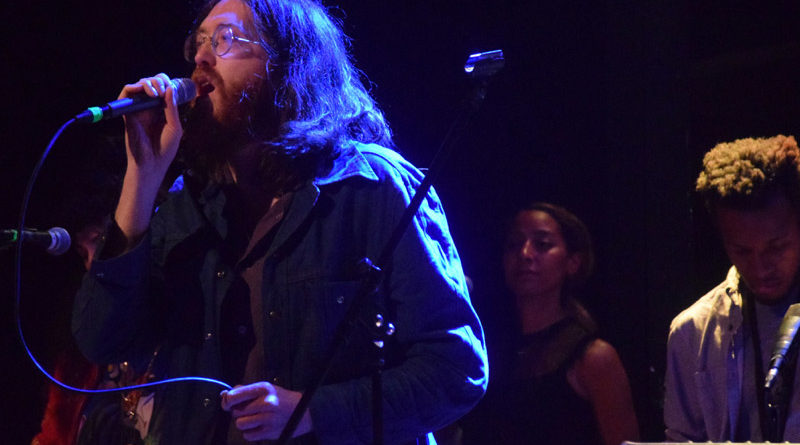 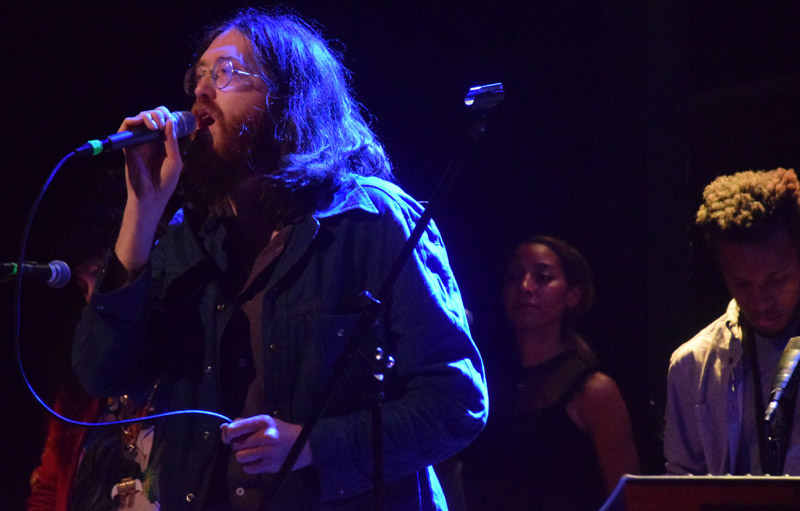 Click here for photos of Okkervil River at SXSW 2018 in Austin, TX

Click here for photos of Okkervil River at 2017 Octfest in Brooklyn, NY

Click here for QRO’s review of Okkervil River at KOKO in London, U.K. on November 22nd, 2011

Click here for photos of Okkervil River at Music Fest NW 2010 in Portland, OR

Click here for photos of Will Sheff solo at Music Fest NW 2009 in Portland, OR

Being a record store and music venue, backed by the likes of both big city booker Bowery Presents and big indie label Rough Trade, not to mention located in The Big Apple, Rough Trade NYC (QRO venue review) often gets acts playing it on the day of their new record’s release (which was moved to Fridays a few years ago). Sometimes that’s just a free, acoustic in-store performance of a few of the songs on the new album, plus a signing afterwards. Sometimes it requires purchase of the new record for entry, but that’s all. And sometimes it’s a full-fledged release party & show, like when Okkervil River stopped by to celebrate In the Rainbow Rain (QRO review) on Friday, April 27th.

The show was indeed a celebration of the new Rainbow, playing it top-to-bottom in the main body of the set. Yet it didn’t feel indulgent on the part of the band (which can often be the case when an act emphasizes their new record, what they want to play over perhaps what the audience wants to hear), nor was their confusion on the part of the crowd with the just-out material. Rainbow does start with perhaps its most engaging and memorable number, “Famous Tracheotomies”, where main Okkervil River man Will Sheff charmingly describes his childhood operation, and then famous people who have also undergone it, everyone from Dylan Thomas to Gary Coleman. It’s a particularly good opening number live, memorable for those who’ve heard the new record, but also accessible for those who haven’t.

Other highlights from Rainbow included “Shelter Song”, despite being about a dog (“Rule #1 in the Songwriter’s Manual: Don’t write a song about a dog…” – someone should have told Jack White that before he wrote the lame “Why Walk a Dog?”), and the surprisingly catchy “External Actor”, which can easily get stuck in your head. Sheff discussed making the video for “Pulled Up the Ribbon”, where they all got injured playing a giant guitar, except guitarist Will Graefe, who got to green screen.

Okkervil River’s video for “Pulled Up the Ribbon”:

But the obvious high point was always going to be “Don’t Move Back To L.A.”. “This is the song that I’m really afraid to explain to the West Coast audiences…” Sheff introduced it with, and it is a paean to friends not to leave NYC (or your hometown), while also detailing the lures of La-La Land. Try emphasizing the latter when playing the City of Angels, Will…

After closing with Rainbow closer “Human Being Song”, Sheff & his band were not done, returning for a full five-song encore. This was a paid, ticketed show (apparently there had been a small in-store earlier in the day), so Okkervil River was giving the crowd their money’s worth, with two from The Stand-Ins (QRO review), “Lost Coastlines” & “Starry Stairs”, one from Down the River of Golden Dreams, “It Ends With a Fall”, and finally two from Black Sheep Boy, “Black” and “For Real” [though your correspondent was hoping for the closest thing the alt-act have to a ‘big hit’, “Our Life Is Not a Movie Or Maybe”] 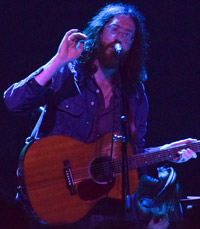 After the show, Sheff & co. did fulfill one end of the in-store aspect, coming out to greet the crowd near the merch table. Rough Trade NYC has a nice set-up for its merch table, in the area between the record store and the main stage floor, enough space to meet the act without directly overlapping with the main stage floor (and one can still get a drink…). And it wasn’t just Sheff, but his whole band (who spilled over the sides of Rough Trade’s not big enough stage), including songwriter in his own right Benjamin Lazar Davis, who was particularly noticeable on the stage with bright pink-checkered shirt, big hair & beard, and big reactions (kind of reminiscent of Adrian Pimento on Brooklyn 9-9).

Okkervil River play across the country (including L.A.) this spring/summer, but only return to New York on September 13th at Music Hall of Williamsburg (which Sheff announced at the show – Music Hall is also run by Bowery Presents), then to Europe in the fall. But it was special to catch the full Rainbow Rain. 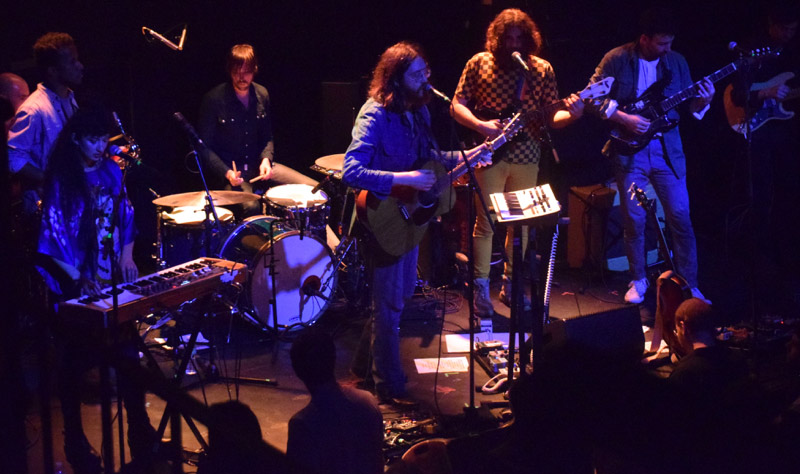