<img src="http://www.qromag.com/wp-content/uploads/2009/01/okkervilriverjan6sm.jpg" alt=" " />For a night, Okkervil River ran down the Gowanus Canal in Brooklyn. ... 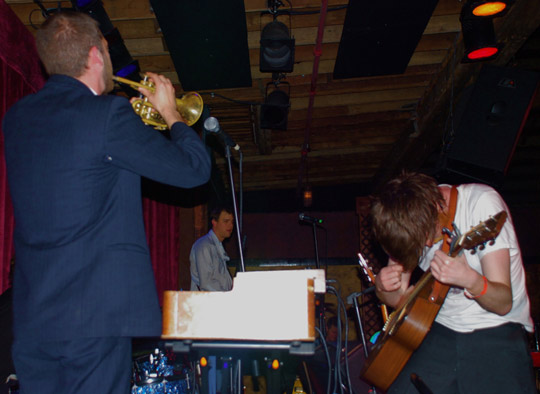 It’s been a good couple of years for Okkervil River.  The Austin-based alt-country act broke in a big way with 2007’s The Stage Names (QRO review) and 2008’s The Stand Ins (QRO review); intended as a double-album, instead broken up into back-to-back LPs that brought the band to new fans while still satisfying old ones.  But how to follow up on that in 2009?  Before heading back into the studio (and onto Late Night with David Letterman), Okkervil River delivered a special one-off show at Brooklyn’s new Bell House that reflected that mixture of excitement and anxiety.

Much of the material from singer/songwriter Will Sheff deals with, or at least references, the life of a musician, such as opener “Plus Ones”, which takes the traditional guest spot list comp and adds it to a number of ‘number’ songs, making “eight Chinese brothers” and “one hundred luftballoons”, for instance.  However, that sad Stage song was played with a fever at Bell House, making it a strong compliment to Stand Ins’s tub-thumper “Singer Songwriter” (which had its own great ‘numerical lyric’, “There are less people dead / Than those who are alive”).  While not all of Sheff’s titles & lyrics were as referential, it was a theme that would rear its head throughout the night.

However, this was all done with the energy of much younger band, and fit with Stage’s alt-pop gem “A Hand To Take Hold of the Scene”, as keyboardist Scott Brackett’s trumpet and the band’s (and crowd’s) hand-claps kicking things up.  That spark kept up even when Okkervil River stepped back into the past a bit with “Black”, from 2005’s pre-Stage LP Black Sheep Boy – the older piece drew a particular cheer from the crowd, as it indicated that the band would not be merely sticking to their most recent work (the set, as a whole, was almost evenly divided between Stand Ins, Stage Names, and Black Sheep).  But from there, the performance began to more and more showcase Okkervil River’s softer, more sad beauty side, elements of which could be found in the following Stand/Stage duo “Starry Stairs” and “John Allyn Smith Sails”, though as raucous as anything that night was the latter’s rousing closing chorus of the often-used sea shanty line, “Hoist up the John D. sail / See how the main sail sets / I just called to the captain / I feel so broke / I wanna go home.”  Black Sheep’s humorous epic “The Latest Toughs” brought a bit of that beauty back, in the group harmony chorus from the band.

Finally, Sheff broke into his stripped side as the rest of the band left the stage and he announced that he was going to play some sadder songs.  And for that, he jumped back to 2002’s Don’t Fall In Love With Everyone You Meet and “Red” (the only number on the night not from the three most recent LPs), a flowing melody that hushed the crowd (save for one drunk fan, who may or may not have been the same one who got a little too up close & into it later in the set, and had to be escorted back by the otherwise soft-handed security).  Sheff got some help on stage with Black Sheep’s male/female duet “Get Big” and Stand Ins’s grand heart “Blue Tulip”, but it was still his more touching emotion that took center stage in the middle of the set.

Two more Stand Ins, “Pop Lie” and “Lost Coastlines”, however, brought the big-time fun back to Okkervil River’s act, as well as Sheff’s musings on being a musician.  He spoke of going back into the “cold studio” after this, as well as the band’s upcoming appearance the next day on Late Night with David Letterman (QRO’s Indie on Late Night TV).  The up-spirit alt-Middle America press of “Pop” was what was going to grace the Ed Sullivan Studio, but as good as it was, the toe-tapping sixties-strum of “Lost” may have been even finer in its catchy rhythm.

The rhythm of the set was thrown off a bit when Okkervil River followed that up with Black Sheep Boy’s heartbreaking title track (note: not “Title Track”, the actual name of a piece on Stage Names) – Sheff accidentally left the capo on his guitar, and had to restart.  But the same record’s “For Real” took in energy from the crowd, as the dark compel became a shout-a-long.  And the band went into the encore break with two of their biggest, most power-pressing songs, in Stage Names’ explosive one-two opener, “Our Life Is Not a Movie Or Maybe” and “Unless It Kicks” (the two tracks also saw Sheff exploring life of fame… or not… or maybe…).

Okkervil River playing “Our Life Is Not a Movie Or Maybe” live at Bell House in Brooklyn, NY on January 6th, 2009:

Back for the encore, Okkervil River again shifted into sweet sadness with the almost tropicalia “Bruce Wayne Campbell Interviewed On the Roof of The Chelsea Hotel, 1979” from Stand Ins, but no song could live up to that awesome title…  It was Stage’s alt-country/saloon “A Girl In Port” that really captured that side of the band, always harder to get to live than their energetic one.  And finisher “Another Radio Song” (from Black Sheep Boy’s later-released, accompanying EP Appendix) caught their slight feeling of loss from garnering greater success. 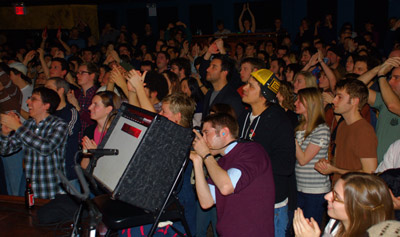 It was certainly a successful night for the new Bell House (QRO venue review), which sold out and saw a wall-to-wall, packed house.  Über-loyal fans, other appreciative musicians, ‘in-the-know’ industry types – even bassist Patrick Pestorius’ sister and extended family were in attendance.  So was a reviewer from The New York Times (are they following QRO?… – QRO live review of Dan Deacon from last month, also covered by The Grey Lady), telling you something about the band’s growing reputation.  Okkervil River’s mixture of emotions on the years past and the year to come shows itself in the mixture of energy and beauty they brought out on stage – portending a 2009 to remember.

Okkervil River playing “Unless It Kicks” live at Bell House in Brooklyn, NY on January 6th, 2009: