<img src="http://www.qromag.com/wp-content/uploads/2011/11/okkervilrivernov22.jpg" alt="Okkervil River : Live" />You can't really claim that you know Okkervil River until you actually see them live. ... 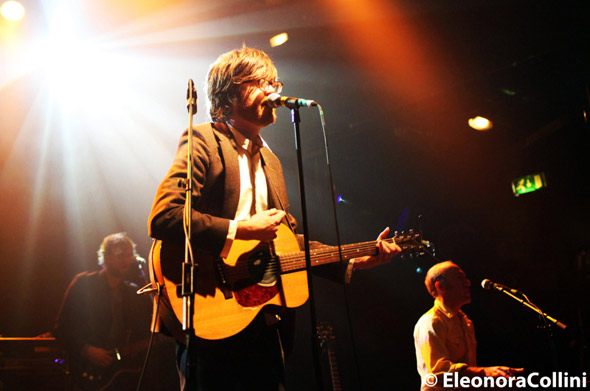 Click here for photos of Okkervil River at 2011 80/35 Music Festival in Des Moines, IA in the QRO Concert Photo Gallery

You can’t really claim that you know Okkervil River until you actually see them live.  Known for their poetic, literate lyrics and their indie-folk storytelling songs usually based around a slow build-up structure, they have an emotional, visceral energy on stage rarely seen these days.  Songwriter and frontman Will Sheff has that kind of intellectual charisma that makes you glue your eyes to him and watch him like in a hypnotic trance for the whole show.  Even more than on record, his voice is warm and mind-blowing, really capable of touching something inside you.  Sheff is all passion, twisting body, enthusiastic incitement, while guitarist Lauren Gurgiolo (now officially a band member) operates in a slower, more controlled way, but her continuous headshaking suggests she’s also under the spell of their music.

Still promoting new album I Am Very Far (QRO review), the first to be produced by Sheff (after his production experience on Roky Erickson’s True Love Cast Out All Evil – QRO review) and which bears a more polished, orchestrated sound, Okkervil River played their second London show of the year (they performed at Heaven last May), this time at the beautiful, baroque KOKO, in Camden last Monday the 22nd of November. 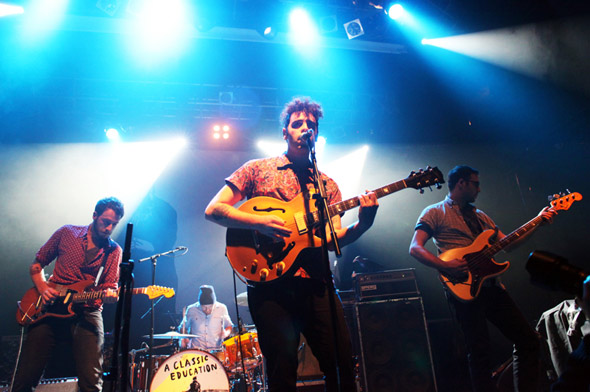 Click here for photos of A Classic Education at Bowery Ballroom in New York, NY on April 21st, 2011 in the QRO Concert Photo Gallery

The psych-garage pop of Italy-based A Classic Education set the mood.  Featuring jangly ‘60s guitars, graceful keys, crooning vocals and a highly reverberated sound, their music has a nostalgic, vintage feel similar to the early Shins (QRO live review) and Real Estate (QRO live review), but with a dreamy touch, reminiscent of some ‘80s bands like Galaxie 500 and Felt.

Led by Canadian Jonathan Clancy, they delighted the crowd with songs from their debut album Call it Blazing which vary from up-tempo catchy tracks like “Baby, It’s Fine” and “Can You Feel the Backwash” to slower ballads such as “Place a Bet On You”, the haunting “Forever Boy” or the melancholic “Spin Me Around”.

With the beautifully lit backdrop of I Am Very Far‘s artwork (designed by Rhode Island-based William Schaff), Okkervil River finally took the stage at 9pm.  Opening with the thumping new album’s lead single “Wake and Be Fine”, they played an almost two hour-set picking from all their six albums.  New songs sounded more like the old ones, probably due to that it’s simply impossible to reproduce live the same wall of sound of two drums, two pianos, two basses and even seven guitars used in some tunes like “Rider”.

The first part of the gig was mainly dedicated to I Am Very Far, from the sexy, keyboards-led “Piratess” to the swirling “We Need a Myth”, and the stunning “The Valley”, an edgy number with heady percussion, eerie string melodies and vivid lyrics (“A slicked-back bloody black gunshot to the head / He has fallen in the valley of the rock and roll dead”).  New songs were alternated with classics from The Stage Names (QRO review – “Our Life is Not a Movie or Maybe” was one of the highlights of the night) and fans’ favorite Black Sheep Boy, like the wrenching ” For Real” (probably their best song to date, and quite frankly a masterpiece), “The Latest Toughs” and the playful “Song of Our So-Called Friend”, and even the beautiful “It ends with a Fall” from 2003’s Down the River of Golden Dreams.

Other highlights were an acoustic version of “No Key, No Plan” from Black Sheep Boy Appendix EP, for which most of the band left to only leave on stage Sheff and bassist/vocalist Patrick Pestorius (this stripped-down version gave the song a sadness and its lyrics a depth that was obscured on the record), new single “Your Past Life As a Blast” and The Stand Ins‘ (QRO review) “Lost Coastlines”, also co-sung by Sheff and Pestorius.  The first part of the show was concluded with “Unless It Kicks” (from The Stage Names), where everybody cheered, raising their hands up, incited by Sheff.  Not even one minute later, the band came back on stage to play a fantastic encore: a cover of Ted Lucas’ “It Is So Nice To Get Stoned”, The Stage Names‘ “John Allyn Smith Sails” and the country “Westfall” from first album Don’t Fall In Love With Everyone You See. 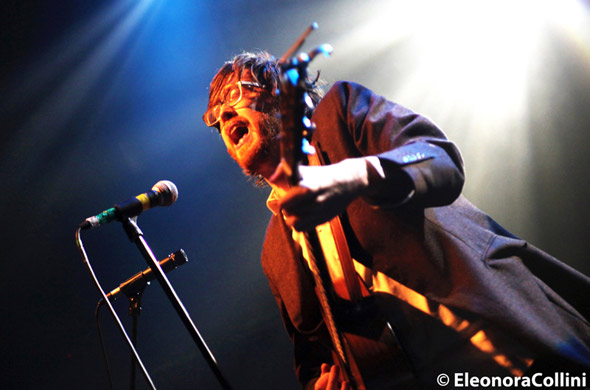 Wake and Be Fine
For Real
Rider
The Latest Toughs
Piratess 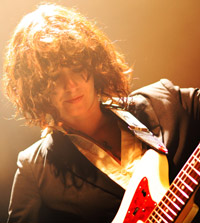 Song of Our So-Called Friend
We Need a Myth
White Shadow Waltz
The Valley
No Key, No Plan
So Come Back, I Am Waiting
It Ends With a Fall
Your Past Life As a Blast
Lost Coastlines
Unless It Kicks
—–
It Is So Nice To Get Stoned (Ted Lucas cover)
John Allyn Smith Sails
Westfall
Tags
A Classic EducationOkkervil River
Categories
Concert Reviews
OLDER ARTICLE