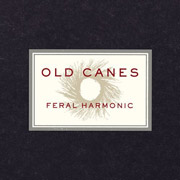 When Appleseed Cast frontman Chris Crisci put out his own Early Morning Hymns in 2004 as side-project Old Canes, it was an outlet for some acoustic melodies, which he built into something more.  But Old Canes seemed destined to remain just that, with no new Old on the horizon.  However, five years later, he’s finally followed up with Feral Harmonic, which similarly takes alt-country/folk and develops it further, but with an added press.

The building instrumental "Intro" well prepares the listener for what is to come, and Crisci may have started on the alt-country/folk playbook, but has developed from there, adding his own chapters.  The pressing up-cheer anthems that immediately follow, "Little Bird Courage" and "The Last Collapse", are maybe the best representations of that (and thus Feral Harmonic may peak a little early), but not the only ones.  "Trust" brings a darker evocative style, while "Next Flood" sees grander heartbreak.  The lower-fi effects on the jangly "Sweet" and scratchy "Under" aren’t the best routes, but the press to "I Will Be the Sun" and "Flower Faces" give those alt-folk numbers something extra.  Banjo-y instrumental "Black Hill Chapel" feels like it’s the closer, but Crisci wisely adds on a sweet, sad strum to finish in "Southern Radio".

You may have heard a lot of the elements to Feral Harmonic before, especially in today’s over-saturated alt-country/folk market.  But as Old Canes, Chris Crisci builds interestingly and originally.