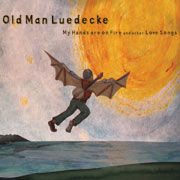 The latest release from Old Man Luedecke presents us with the next chapter of a story that has already garnered the Nova Scotia native a Juno Award and international acclaim.  Much has changed from last year’s Proof of Love, though.  In short, the-not-so-Old Man seems to have given into temptation and formed a full band to join him on this record.  With friends at his side, Luedecke returns to deliver eleven brand-new banjo-based ballads.

Fans of Luedecke will still recognize his soft twang and the strumming of a banjo, but the fresh faces are not all that’s new with this album.  Having amalgamated his sound into that of the proficient group of players around him, Old Man Luedecke has switched from a modest one-man band to a broad musical endeavour.  Not only does My Hands Are On Fire continue the signature blend of modern folk and vintage hillbilly, the album also explores many other genres, all the while ringing with wholesomeness and clarity.

Despite the purity of the albums pleasing songs, Luedecke does walk a thin line early on, in terms of conveying the emotion he sets out to.  Though the album begins with a bang on "Lass Vicious", there are a few times when Luedecke’s tone doesn’t quite do the subject of the song justice.  Whether or not this has more to do with the genre than the musician, you get the feeling that music and voice are not quite in line just out of the gate.

Thankfully, Luedecke quickly rounds the corner on upbeat numbers "Mountain Plain" and "Foreign Tongue".  The cheerful songs raise the tempo and emotion, and see music and voice perfectly fall perfectly in sync.  From there, the album is smooth sailing.  A touch of mandolin here or a hint of pedal steel there adds a beautiful accent to banjo and the oft-present fiddle.  In terms of the Old Man, he is still on the top of his game.  Whether it is the playful nature of the album title, the sincerity of his lyrics, or even the way he croons in such a soft and sentimental way, Luedecke glow with competence, and attentiveness.

Despite the continued evolution shown in forming a full band, this album sheds much of the modesty that endeared Old Man Luedecke to many.  Though indeed a risky move, My Hands Are On Fire is for the most part a standout album.  Luedecke’s talent of mixing some very diverse styles is especially noteworthy, considering the record’s overall pleasing environment.  From bluegrass, to Appalachian folk, to roots and even country music, the combination is as intriguing as it is rare.  In Luedecke’s own words from "Machu Pichu", "There was never a song I couldn’t sing myself out of".