<img src="http://www.qromag.com/wp-content/uploads/2011/03/omdmar8.jpg" alt="OMD : Live" />Synth-pop veterans OMD took Terminal 5 <span style="font-weight: normal">by storm, to the surprise of most of the sold-out audience who either wasn't alive... 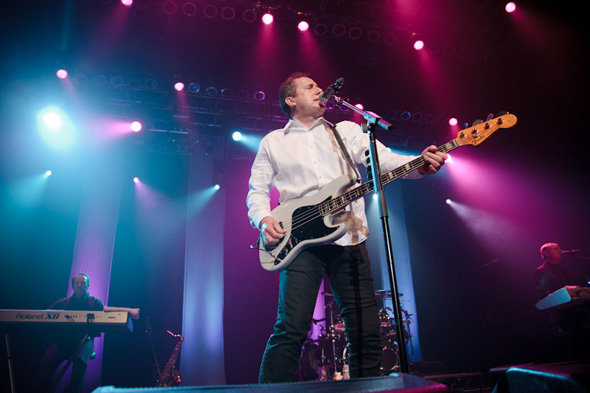 Click here for photos of OMD the night before at Paradise in Boston, MA in the QRO Concert Photo Gallery

Synth-pop veterans Orchestral Manoeuvres in the Dark took New York’s Terminal 5 (QRO venue review) by storm on Tuesday, March 8th, to the surprise of most of the sold-out audience who either wasn’t alive when OMD last toured the U.S. 23 years ago, or was just reaching puberty.

The evening started well with the Danish Brooklynite Oh Land (QRO photos), who played a short, but charming and energetic set sporting balloons and glitter paint. 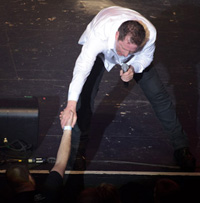 After Oh Land, the excitation in the eyes of the die-hard fans in the front row, who had seen the soundcheck earlier, went up a notch.  They had had a glimpse of what the rest of the crowd was about to discover: this quartet of middle age guys (the original lineup) can (still) rock!  After co-founder Paul Humphreys, drummer Malcolm Holmes, and keyboard/saxophone player Martin Cooper took position behind their respective instruments, Orchestral Manoeuvres in the Dark’s frontman Andy McCluskey appeared, bass in hand and mandatory skinny tie around his neck.  For the next 90 minutes, he not only electrified the audience with his voice, but also with his awkward, yet endearing dance moves.

Skinny tie came off after the first two songs, "New Babies: New Toys" and "Messages".  The bass guitar followed up quickly – not because McCluskey tired, but because he wanted to really interact with the crowd, shaking hands, high-fiving.  The missing thing was a baby to kiss to fully confuse him with a campaigning politician.  The energy and obvious signs of affection he gave the crowd was refreshing to see when most of 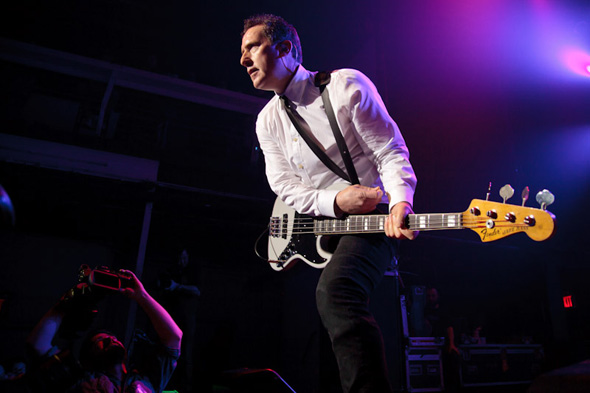 the new and upcoming pop bands (that OMD pioneered for the most part) just stand behind their instruments and avoid interacting with the public.

McCluskey also playfully blamed eighties filmmaker John Hughes for his band’s celebrity in the U.S. before starting "If You Leave", saying, "We were an alternative band before this song."  They also knew perfectly who came to see them and why as the band was introducing "Sister Mary Says" from their new album History of Modern by saying, "We have a new song for you – *crickets chirping* – and it’s fantastic!"  The 21-song set, studded with all the classics from "Locomotion" to "Enola Gay," was definitely a crowd pleaser.  The audience spent the evening backing up McCluskey, singing, clapping and dancing like it was…  Well, like it was 1982 all over again.

All in all the band looked happy to be playing in New York City, regretting their 23-year absence and promising several times that they would be back soon.  More than an incredible show, OMD felt like a visit with a long lost uncle and discovering that he became even more awesome than you remembered as a child.