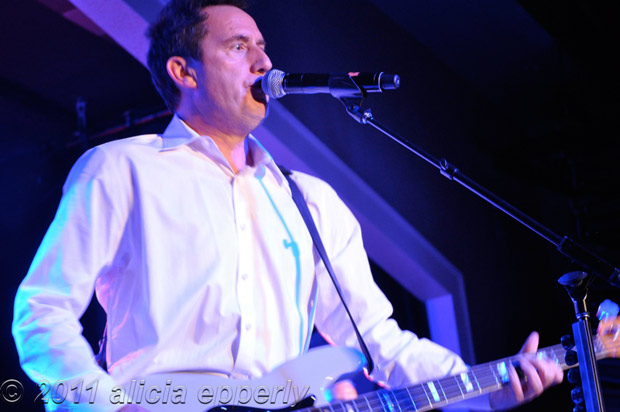 OMD brought their reunited classic line-up to Portland, OR’s Wonder Ballroom on Saturday, October 1st for their first North American tour since 1988.  Touring behind 2010’s reunion album History of Modern, Andy McCluskey (vocals, bass), Paul Humphreys (vocals, keyboards), Malcolm Holmes (drums), and Martin Cooper (keyboards, saxophone) were welcomed by a rapturous audience of over 700 who were ready to celebrate the band.  It also happened to be Cooper’s birthday, which only added to the festivities.

The band opened the night with History of Modern‘s “New Babies, New Toys” (one of four new tracks they worked into the set), then stopped for a moment for McCluskey to say, “We finally made it back,” while the crowd 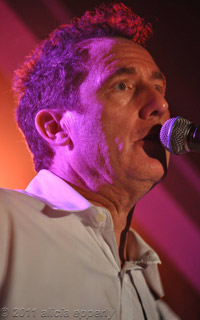 roared.  It’s hard to find the right words for how enthusiastic the audience was.  They screamed all night long and the band was obviously touched by their response.  “Dazzle Ships” from 1983 followed and right away everyone knew this night was going to be filled with songs throughout OMD’s 32-year career.  By song three, “Tesla Girls”, the night had turned into a wild dance party and the band rarely let the foot off the gas.  The self-effacing McCluskey, known for his wild dancing moves, engaged everyone with many quips, including, “The good news is I put my bass down so I can’t play that badly anymore.  The bad news is, the dancing begins.  You’ve got to see it to believe it.  You’ve got to follow me, come on, COME ON!”  And the crowd followed wholeheartedly.

Humphreys took his first turn of the night on lead vocals for “Forever (Live and Die)”.  It was great to see him take center stage and get out from behind his keys for a few moments.  His voice still retains the softness after all the years and he hit the notes perfectly.  After “Forever”, McCluskey announced (tongue-in-cheek) that it was Cooper’s 97th birthday, and asked everyone to wish him a happy birthday.  “If You Leave” (which was referred to as their “Hollywood moment”) was obviously one of the high points of the night as it was the band’s biggest U.S. hit, but even obscure songs such as “Statues” from 1980’s Organisation were loudly applauded.  “Green” from the new album was embraced, with some help from McCluskey’s introduction of “this next one’s new, but don’t worry.  It’s brilliant!  Trust me.”

Other big highlights of the evening were “So In Love” and “Sister Marie Says” (another new one), yet once OMD started “Dreaming”, the crowd reached their loudest decibels of the night.  It was one of most transcendent 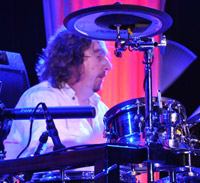 moments in a show that was packed with them.  With “Enola Gay”, they mentioned that it would be the last song and as it ended, chants of “OMD, OMD, OMD,” rang out.  With their brief encore over, they launched into “Walking On the Milky Way”.  Afterwards, Humphreys noted (somewhat jokingly) that they had received hate mail recently for leaving “Secret” out of previous shows, so they rectified that tonight.  And he again gave another wonderful lead vocal performance.  The night ended with the band’s earliest song, “Electricity”, which seemed fitting since they started the evening with a new one.  It was an epic way to end an hour-and-a-half, 22-song performance.  With that, McCluskey said, “Please get home safely ‘cause we will come back and see you again.”  This night made it obvious that OMD are more than back.  They might even be near their highest peak. 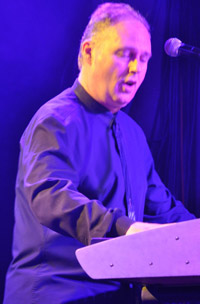