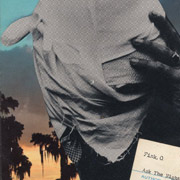 Orenda Fink is most closely associated with Omaha, Nebraska, thanks to her work in Azure Ray, on Omaha’s own Saddlecreek Records (Bright Eyes, Cursive).  And Fink is married to Todd Fink (formerly Todd Baechle), lead singer for Omaha’s The Faint (QRO live review).  But she’s a native of Birmingham, Alabama, and she’s slowly been rediscovering/reintroducing her Southern, haunting gothic alt-folk roots.  First there was O+S (QRO review), her record earlier this year with Cedric LeMoyne of Remy Zero.  Now she goes full-on solo for Ask the Night, a sweet, spooky slice of alt-folk.

Night is strongest when Fink hews more towards the haunting side, in openers "Why Is the Night Sad" and "High Ground", the former stripped, the latter tragic & epic.  Her sweet songs can be a little too sweet & nice, such as "The Garden" or the forgettable harmonies of "The Mural".  She can also strip too far, like on "Sister" and "That Certain-Something Sinister".  Alt-folk may sound like an easy genre, just a voice & an acoustic guitar, but it’s also hard to be original in it, and pieces like "Wind" can feel a bit paint-by-number alt-folk.

However, most important is the voice, and that’s something Fink has had for years, but Ask the Night really lets her display it more than anywhere else.  When she grows expansive & emotional on "Half-Light", one can feel her power; that Southern belle effect is remarkable.