<img src="http://www.qromag.com/wp-content/uploads/2011/08/osheaga11d1.jpg" alt="Osheaga : Day One" />The new Day One of Osheaga featured a major side/main stage divide, between indie kids & all those Eminem fans. ... 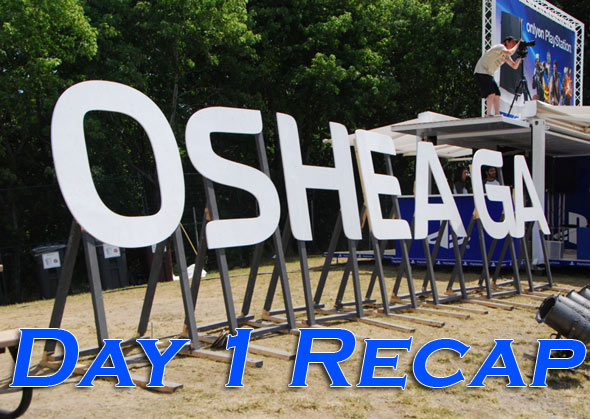 Last year, Montreal’s Osheaga Music Festival reached the top level of North American music festivals with an indie fan’s wet dream (QRO recap).  Rather than try to repeat that trick, Osheaga 2011 went wider, both in terms of acts – everyone from Eminem to Elvis Costello (and that’s just the letter ‘E’…) – and days, expanding to a third, now Friday-Sunday, on July 29th to 31st.

The ‘new day’ at Osheaga, Friday, Day One, was an outlier for other reasons.  It started later than Saturday or Sunday, with doors not at noon, but 3pm (which was nice if, say, your flight from NYC had been cancelled and the one you were bumped to touched down at Trudeau Airport at 3:15pm…).  It also featured a rather stark divide between the two main stages (River & Mountain, or ‘Riviére’ & ‘Montagne’) that were set up next to each other under the sun (thankfully the rain had stopped by show time), and the two side stages (Green & Trees, or ‘Verte’ & ‘Arbres’), amidst the trees.  The main stage area was populated by fans clearly there for the night’s headliner, Eminem, along with disappointed Kid Cudi fans (Cudi cancelled that day-of due to ill health, bumping up Bran Van 3000 – QRO photos – and Charles Bradley – QRO photos), while the side stage area was stocked with your alternative music fans. 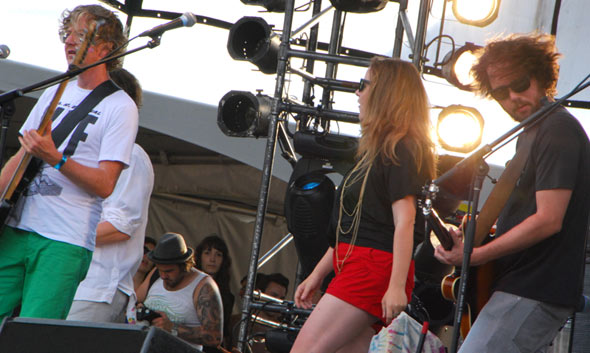 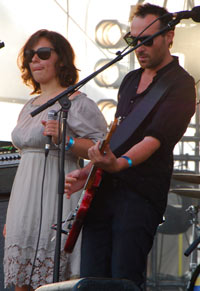 Broken Social Scene really got things going around 5pm (and brought the indie music fans out from the trees and to the Mountain Stage) – you know you’re doing well when these guys are kicking off the day!  While they indulged in a few older favourites like “Superconnected” and “7/4 Shoreline”, BSS shied away from most You Forgot In People-era standards, instead opting to focus on latest release Forgiveness Rock Record (QRO review) – though did include a cover of Modest Mouse’s (QRO album review) “The World At Large”.  This meant some pretty impressive renditions of “Forced To Love” and “Meet Me In the Basement”, although it also left fans craving a little something more from the Toronto titans (who were joined by friends like Amy Millan & Jimmy Shaw, of, respectively, Osheaga 2010’s Stars – QRO photos – and Metric – QRO photos, plus Liam O’Neill of Montreal’s late Stills – QRO spotlight on – and Dallas’ Ariel Saldivar). 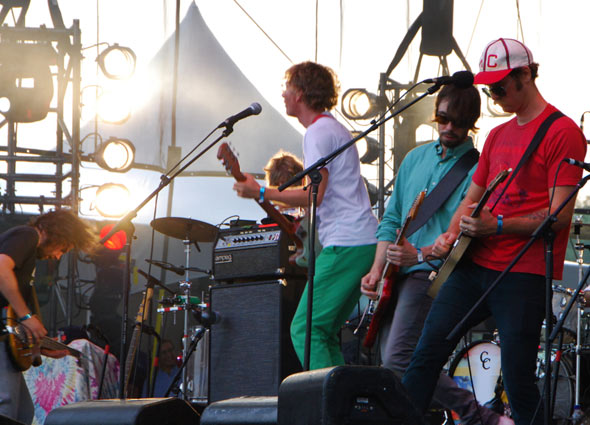 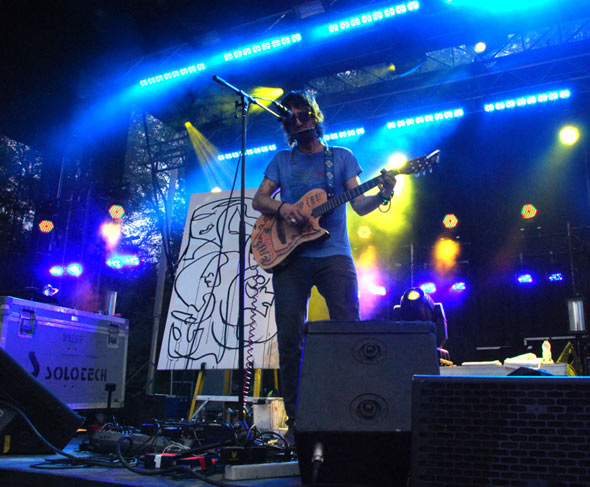 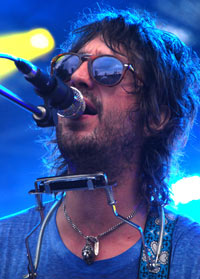 After two albums with back band The Lonely Astronauts (QRO photos), Joseph Arthur returned to truly solo on this year’s The Graduation Ceremony (QRO review), and was likewise solo at Osheaga – though not without his art (he once had his own gallery in DUMBO area of Brooklyn, ‘The Museum of Modern Arthur’ – QRO venue review).  Arthur had some psych-guitar moments, but was mostly playing stripped-seventies alt-folk, perhaps a little too Americana for a crowd on this side of the border. 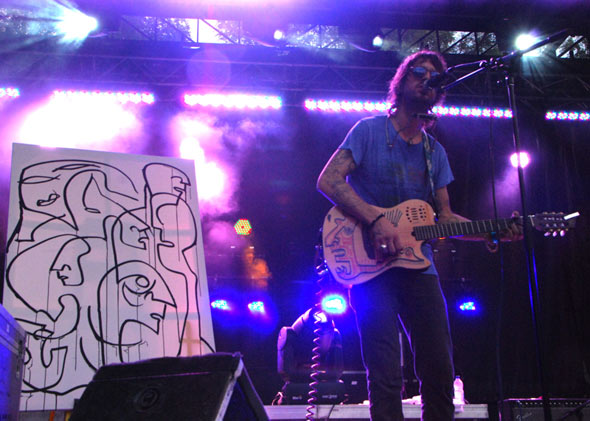 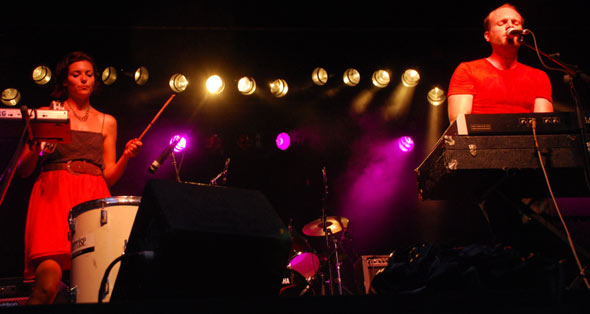 Click here for photos of The Rural Alberta Advantage at 2010 Primavera Club Festival in Barcelona, Spain in the QRO Concert Photo Gallery

Click here for photos of The Rural Alberta Advantage at SXSW 2010 in Austin, TX in the QRO Concert Photo Gallery

Click here for QRO’s review of The Rural Alberta Advantage at Backspace in Portland, OR on December 18th, 2009 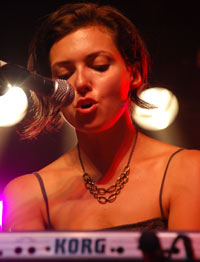 With a set that brought QRO front row center and kept us there throughout, The Rural Alberta Advantage then captivated a huge Tree Stage crowd with tender stories of homesickness and big city blues.  As the sun set on Montreal, the Toronto-based trio played through an interesting set list made up of fan favorites and lesser known songs off of both Hometowns (QRO review) and Departing (QRO review).  From the power and fury of “Stamps” and “Drain the Blood” to the soft-spoken elegance of “In The Summertime,” the bands live show captured the heartfelt nature of their records, along with the attention and hearts of the audience.  The clincher?  Dozens and dozens of rowdy Canucks singing along with Nils Edenloff and Amy Cole on “Edmonton”. 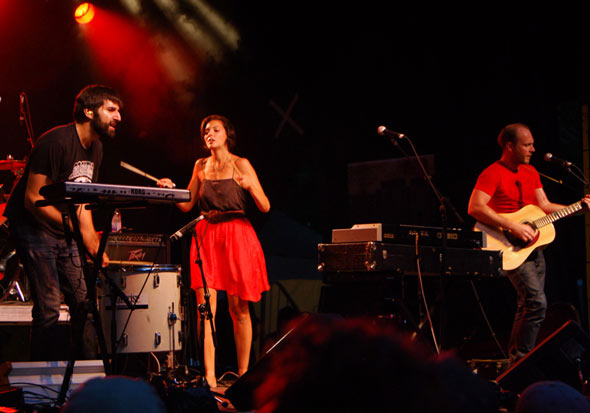 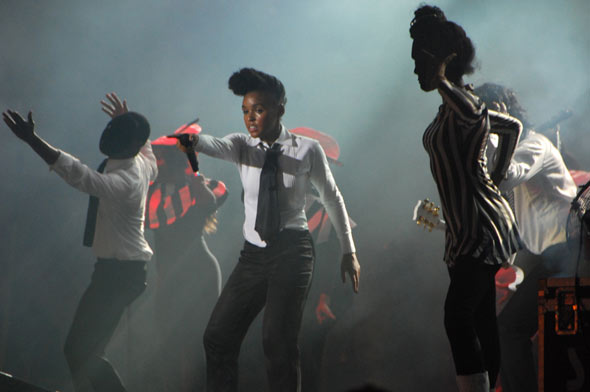 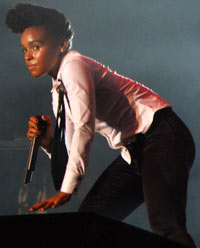 The artist that probably best managed the main-side stage divide, other than national heroes Broken Social Scene (see above), was Janelle Monae.  Her main stage set was big and exciting for said stage, but the up-step dance and especially Monae’s great attitude & presence could work on anyone.  There’s a reason she can play with of Montreal (QRO live review, with Monae) or Sean ‘Diddy’ Combs.  Her moves & dancers could be a little hard to see in the now-dark evening (especially when Monae was lying on the floor of the stage), but she was always felt – and special props for literally singing that she would do this even if she didn’t get paid… 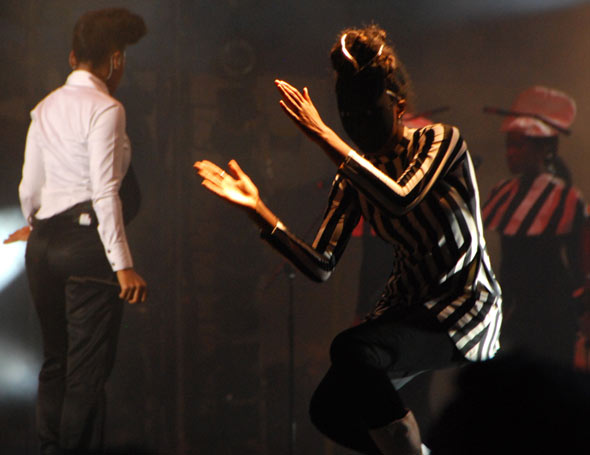 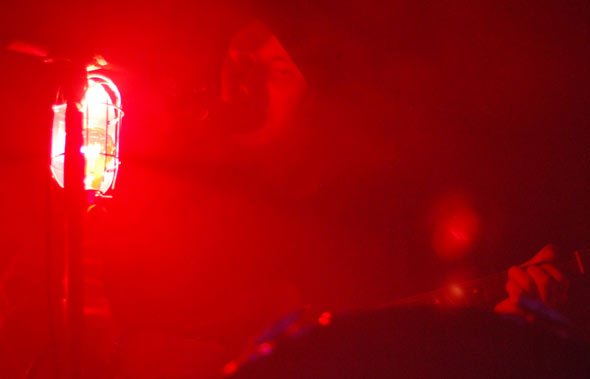 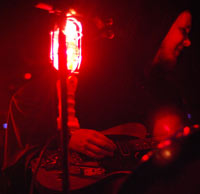 The sun had vanished by this point, and with darkness sweeping across the island; a creepy atmosphere quickly enveloped Osheaga’s Green Stage.  Although Brooklin, Ontario’s Timber Timbre pleased their small crowd with the hits of recent Polaris Prize nominee Creep On Creepin’ On (QRO review), it seemed as if TT’s Taylor Kirk may have taken the album’s title a bit too seriously.  Donned in a strange, black hooded garment, and with fog rolling and odd lights dotted across the stage, Kirk & co. built a strange ambiance around their mostly ordinary live show.  Sure, “Black Water” and “Bad Ritual” were nice and catchy, but Kirk’s complete lack of stage presence and off-putting theatrics didn’t quite cut it here (indeed, he shoed away photographers trying in vain to shoot him through the smoke and low red light…). 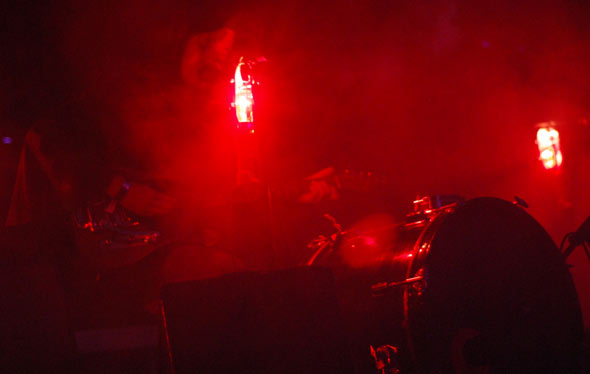 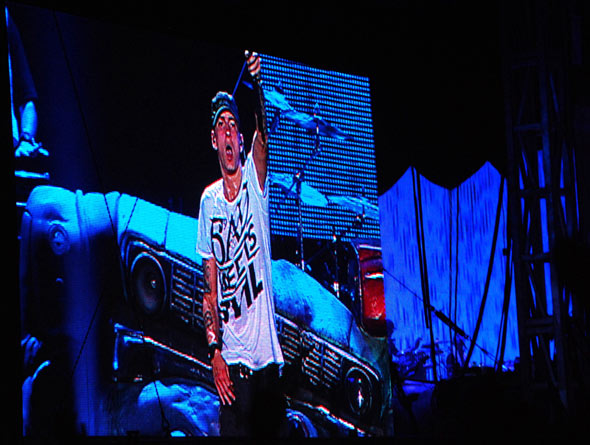 The biggest draw of Osheaga was clearly Eminem, unsurprisingly, considering he’s the top-selling artist of the twenty-first century (The Beatles are a mere #2, even after finally getting on iTunes…).  The entire River Stage area – and much of the Mountain Stage area next to it (there was a divider between the stage areas for the two stages, so one couldn’t just shift to the right or left after one main stage act was done to still be up front for the other, unlike last year) – was filled with fans for a record Osheaga turnout. 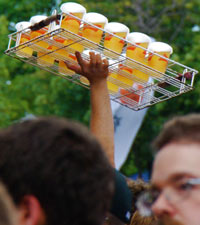 Despite being in Francophone Canada, Eminem fans in Montreal are pretty much like Eminem fans in America (except for being whiter – or perhaps his U.S. audiences feature as few African-American faces as his Canadian ones…).  They were down with the beats, cheeringly loudly for ‘classics’ like “Stan” (which featured the video played above Eminem – wonder how actor Canada’s own Devon Sawa – Final Destination – feels about still being shown as title character in that video; given the maturing teen heartthrob’s current career, perhaps doesn’t mind any exposure…), putting their lighters up for “Lighters”, and welcoming Eminem playing a number he’d never done live before, “Space Bound”.  They were also drunk (no ‘beer tents’ in Montreal – can drink wherever you want!), with some near-fights breaking out, a few fans arrested, and guy pushing through the crowd, holding up his incoherent girlfriend, to get to the side to find medical help.

It was interesting to note how much of Eminem’s work eschews the boastful hip-hop for the solemn, not about his success but his troubles – “Put your lighters up” for his torch songs.  Marshal Mathers himself sounded a little drained at the show – if you stuck around; all the indie fans from the side stages were beating the crowds and going home early, to get rested for Day Two.