There’s a massive unique sound on Am, the latest album from Ovlov on Exploding In Sound Records.... 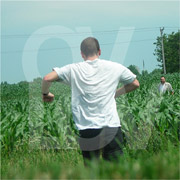 There’s a massive unique sound on Am, the latest album from Ovlov on Exploding In Sound Records.  Their extreme dense layers of distortion and heavy sustained tones reference late ‘90s shoegaze and hardcore at the same time.  Their combination of post hardcore energy is like the controlled mayhem of Blonde Redhead (QRO spotlight on), constructing a swirling blur for Steve Hartlett’s distinct vocal to wrangle back into melody.

It could be partially because Ovlov is made up of three brothers – Steve, Theo and Jon Hartlett – on guitar, drums and bass.  A focused consensus of siblings might be the secret to pushing these elements into this original combination.

From the first track “Grapes”, Am lays out its concrete direction with an insane amount of crunch and feedback of detuned chords.  The harmony between Steve and Speedy Ortiz’s Sadie Dupuis is just barely audible above the impressive density.  They’re out to build up a jangly wall of noise with shoegaze layers of pure distortion in a thick blanket of static.  Fuzz fuses into melodic layers over buried percussion, fighting hard to keep high hat sparks audible above a rumbling sludge of oozing distortions.  Steve strains in an effort to deliver his vocal, reminiscent of Rites of Spring’s Guy Picciotto, while the whir of distortions have moved into Gish-sounding dense fuzz.  You could almost hear a psych influence in the epic swirling if it wasn’t completely unwavering in its attachment to precise impenetrable layers.  They aren’t interested in shoegaze or psych’s subtlety and quirks, just determined, confrontational sound.

“Nu Punk” opens with an echo of the track itself, a tiny shockwave that foreshadows the impending earthquake.  Impractically heavy, dead strums on the guitar grind the track forward and the regular snare strikes sound like “X.O.X”, a track from Hot Snakes’ Suicide Invoice.  Ovlov is after the same kind of thick, barreling-into-the-red push.  Shoveling sound over sound, leaving it buried under the pulsating dirt piles.

“Where’s My Dini”, named after a good friend and unofficial member of the band, has a slightly different plan in it’s plodding, single note, melody.  Brief fits and starts twitch and Steve sings in a falsetto Doug Martsch style.  They get just as big as the Boise, Idaho band in epic moments to come.  Brothers might have an unfair advantage being able to pick up on the nuance of tone changes in an arrangement this massive.  A chorus peaks in rising guitar distortions and a solo breaks out of the main rhythm, flattening everything in its path.  But all the intricacy in the world can’t slow down “Milk”, and Steve’s vocal fills any open spaces in the blast of power shoegaze.  But shoegaze isn’t the right word; it’s got the same density of layers but the power is directed in a punk direction instead of a fuzzy lullaby.  The layers of guitar eventually get out of hand, compelled to break out of the straight and narrow.  The only room left is taken by the slow butchering of squealing guitar.

There’s also an aggressive, emotive sound like The Desaparecidos, Connor Oberst’s post-hardcore project.  Ovlov confronts a similar sadness under the surface on “Moth Rock”, an attempt to deal with those bigger issues only to get broken in the process; this isn’t optimism and sunshine.  Their distortion feels unprecedented in the way they abuse the layers into a melodic line, they don’t strangle any of these tracks in an attempt to just shock or awe.  Solos are tortured, wrung out of the high end of the guitar, impossible to duplicate.  This is a perpetually sweaty wrestling match, a near physical destruction of the instrument and approaching a conclusion to all of post rock.

The last track, “The Great Alligator”, isn’t scared to directly reference My Bloody Valentine in its bending whammy bar harmonics, but instead of their lyric getting lost under distortion, it rises to the surface.  That wobbly guitar sound is that much more memorable in a band pushing beyond simple density.  They’re creating new associations with these heavy sounds like prehistoric palm trees swaying impossibly far and toppling under their own weight.  It now belongs to the future of this range of dynamics.  The piercing tremolo reaches for melody and devolves into chaos again.  The layers can’t be tamed and maybe that’s what Ovlov wants: to create a huge, unwieldy sound that can deliberately get out of control.  The brothers might not even be sure exactly where it’s going and that’s what makes it exciting, its unmanageability.  It isn’t going to be easy pulling this off live, but I’m positive they weren’t thinking about that at all.  This is what they set out to do and they got it.  A seven-minute track that collapses in on itself a thousand times.