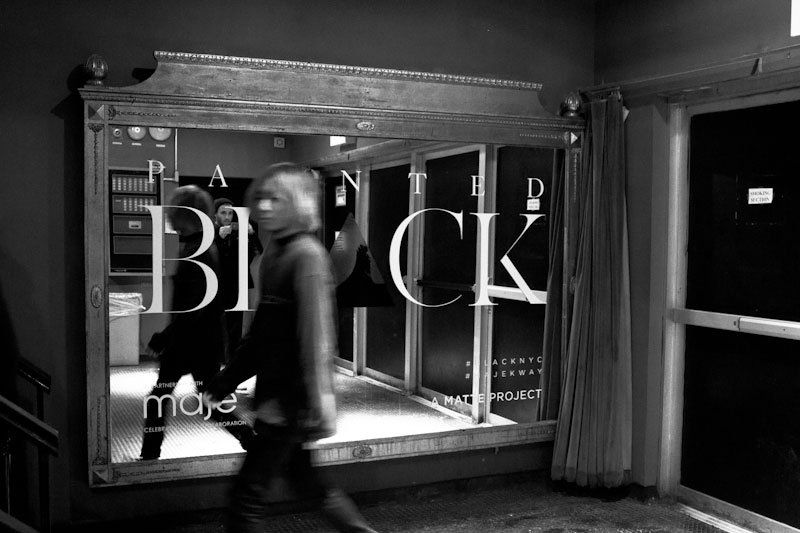 When I arrived at New York’s Irving Plaza on Thursday, February 20th, I would not have been terribly surprised to run across a few tumbleweeds on the dance floor.  Eiko Hara was spinning from behind a white DJ booth with overalls and an oversized hoodie/jacket thing draped over her shoulders, which made the already small Asian Eiko Hara look absolutely miniature.  And despite the quality of mixing skill and superior song selection that she was showing off–no one in the less than a quarter-full venue seemed interested in dancing.  Who could blame them?  We were in for a very long night. 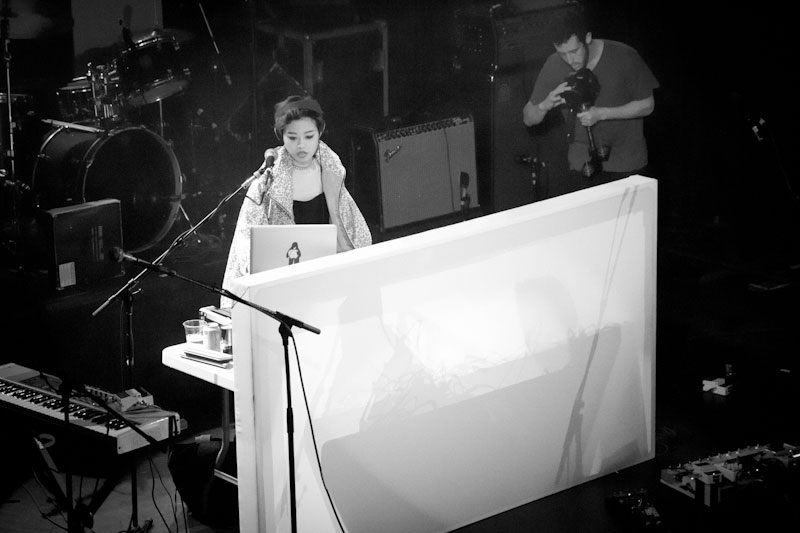 Matte Projects partnered with fashion label Maje to celebrating their new collaboration with K-Way.  They hosted part II of the Painted Black series, which consisted of four shows in one night.  First Eiko Hara, then Guards, then DIIV, and wrapping it all up would be Twin Shadow with a DJ set.  The show organizers set their sights quite high.  From the press kit:

Each of these performances will be paired with visually stunning interactive shows that have been created collaboratively with the performers and have never been seen before.  Beyond a typical concert, PAINTED BLACK is an exploration of a color and a lifestyle through a live experience.  In the pursuit of this, the musical acts will be paired with visual artists, stage builders, sculptors, fashion designers, and filmmakers, creating unique pieces to be debuted at the series. 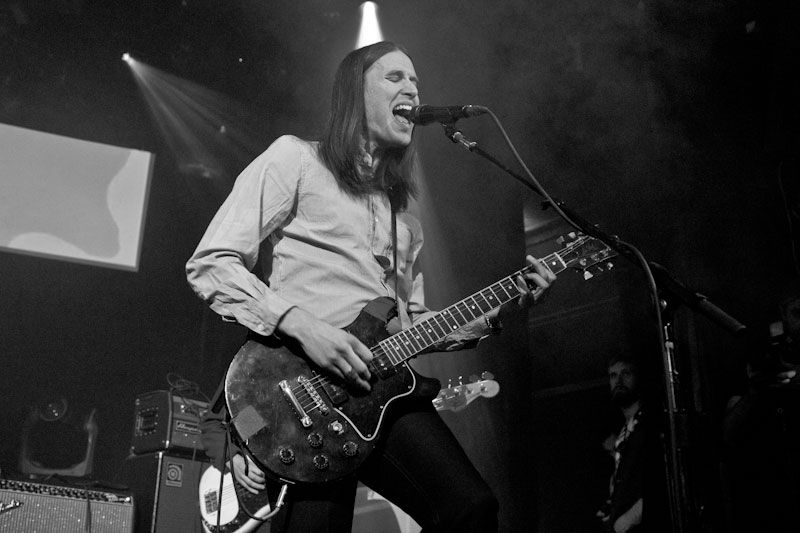 If the shows were meant to be interactive, I did not witness it.  In fact, from the promise of a visually stunning performance, only Twin Shadow even approached fulfillment.  After Eiko Hara left the stage, Guards trotted on.  Guards features frontman Richie Follin, brother of Cults’ (QRO album review) vocalist Madeline Follin.  When listening to Guards, you can’t help but wonder if the very existence of the band relies on famous friends.  The show consisted of some androgynous vocal work from Follin, disinterested auto-harping (yes, autoharp…) from the aloof Kaylie Church, and what felt like hours of masturbatory vamping on chords that would feel more at home in a butt-rock album. 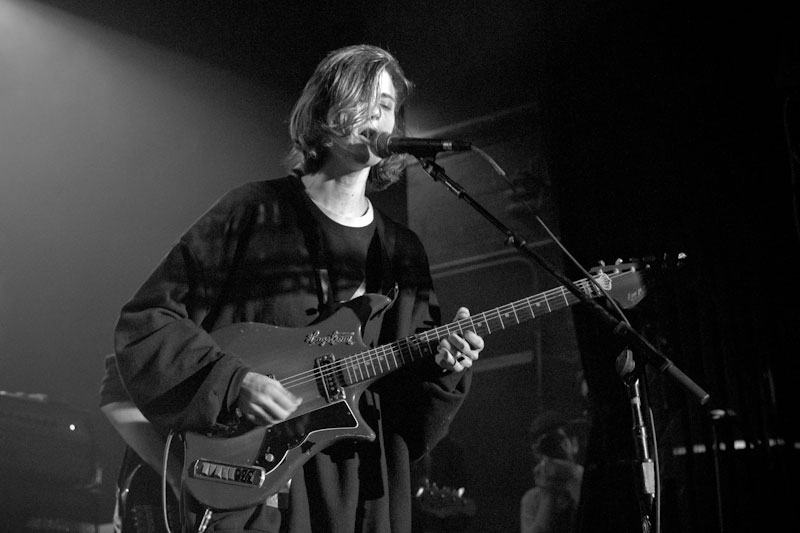 Moving right along, we came to DIIV.  This was easily the section of the night most anticipated by the attendees, and indeed it provided the most enjoyable moment of the evening.  The crowd had swelled to about two-thirds full, and a less empty venue almost always translates to a better show.  DIIV’s music is drenched in reverb and often has a loose quality that can push and pull.  It borders on a shoegaze take on summertime beach music for city-folk.  At times, that works very well.  “How Long Have You Known” is a fantastic song, and the performance, although perhaps 10bpm faster than the album version, was filled with energy – both from the crowd and the performers.  DIIV knew that piece was their best chance at making a positive impression.  But once it came and went, there wasn’t much left in the night to keep my attention.  DIIV played a cover of something – for the life of me I could not decipher what song it was they were covering.  Frontman Zachary Cole actually apologized to the audience for even trying it. 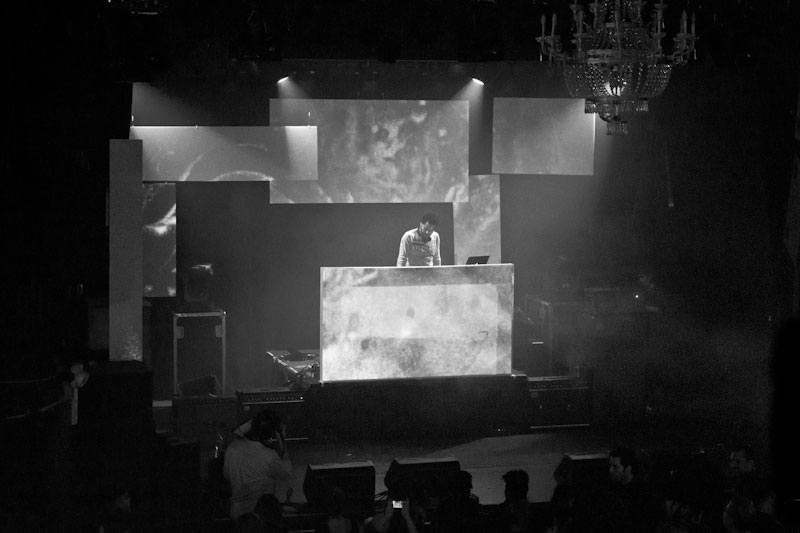 And then there was Twin Shadow.  His music is fantastic, and his DJ skills are likely just as good, but by the time he took the stage it was 1:30am.  Irving Plaza (QRO venue review) was right back where it started at 9:30pm.  The latecomers who had arrived just in time to hear “How Long Have You Known” had already fled the scene, leaving dance floor about a quarter of tired, bored, concertgoers.  Twin Shadow stood nestled behind the white DJ booth, surrounded by about five white panels onto which boring visualizations were projected.  These projection-mapped visualizations must’ve been the “unique pieces” that were to be debuted at the show.  As I walked down the stairs and out of the venue I could still hear DJ Twin Shadow pleading with the crowd: “Where my dancers at?” 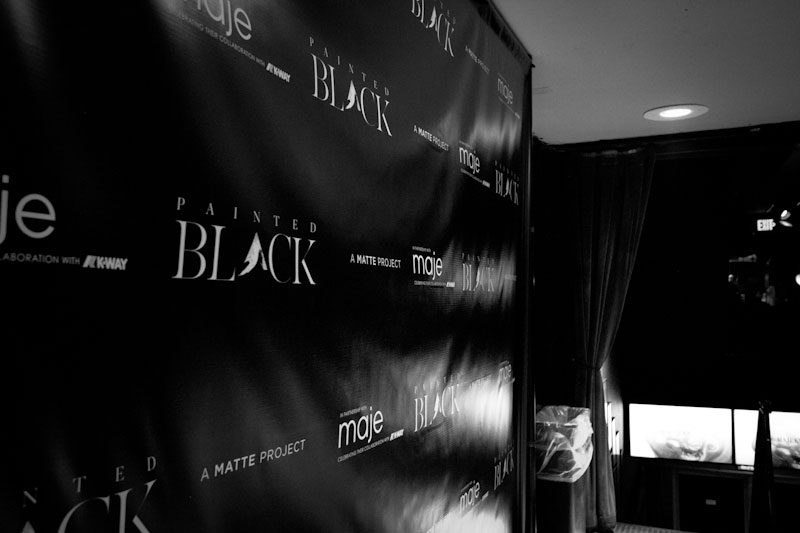