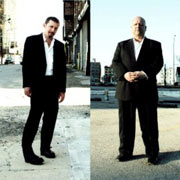 It used to be easy to tell the musical story of Charles Michael Kittridge Thompson IV – he was Black Francis, leader of the acclaimed Pixies, then the Pixies broke up, and he was solo artist Frank Black.  Even adding ‘& The Catholics’ to his solo moniker didn’t change things.  But after The Catholics, the Pixies reunited at Coachella in 2004 (basically starting the ‘alt bands reuniting – and cashing in – trend’), though only playing the old, much-beloved material.  Then Thompson returned to the ‘Black Francis’ name.  He also produced the last two Art Brut (QRO spotlight on), did a score to the 1920 silent film The Golem, teamed up with his wife as Grand Duchy (QRO album review), and more, while still putting out solo records – albeit of diminishing returns.  But now Frank Black Francis has done his best off-angle move so far, pairing with longtime friend & tourmate Reid Paley as Paley & Francis.

While Francis is still best known & loved for his alt-rock work in Pixies and as Frank Black, recent years have seen him trend into the alt-country lane, especially since readopting the ‘Black Francis’ name in 2007 with Bluefinger (QRO review).  The more stripped-down Francis certainly had its high points, but by last year’s Nonstoperotick (QRO review), they were getting fewer and farther in between.  Teaming up with the gruffer alt-country troubadour Reid Paley (who’s also known for his winning humor on stage, including opening for Francis) has brought a shot of vigor into Francis, even as his goes further into even alt-blues & -gospel.

The songs on Paley & Francis (how nice of the more famous of the two not to take first-billing; though that’s not alphabetical order…) go roughly one-two in terms of who takes the lead, with Paley a much gruffer, saloon-style voice, even ragtime on pieces such as “On the Corner”, “Ugly Life”, “The Last Song”, and “Deconstructed”, though varying from sad, near-gospel sway (“The Last Song”) to saloon bombast (“Deconstructed”).  Indeed, Paley’s is the more memorable voice on Paley & Francis, though Francis’ guitar work stands out on such numbers as “Curse”, “Crescent Moon”, and especially “Praise”, as fine a song in Frank Black Francis’ discography as there is.

People looking for new Pixies or Frank Black II won’t find it on Paley & Francis, but they should know better by now (Pixies have been touring behind deluxe edition of Doolittle for over two years now – QRO live review).  But the alt-country Black Francis has been revived with a heavy dose of Reid Paley.