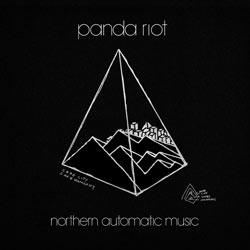 Hazey, dreamy, shiny, gazey: Chicago’s Panda Riot returns with its full-length Northern Automatic Music.  It’s Jesus & Mary Chain plus the frostiness of a Twin Peaks synth line.  Stiff percussion, six-string atmospherics, and found sounds add up to an ambitious instrumental effort on tracks like “Golden Age”, while the soft sheen of Rebecca Scott’s lead vocals brings the hook-driven pop back home on “Black Pyramids”. Soak in the panoramic shoe-fi bliss at the record release on February 22nd at the Hideout in Chicago.  With Big Colour and Lightfoils.