Panic! At the Disco 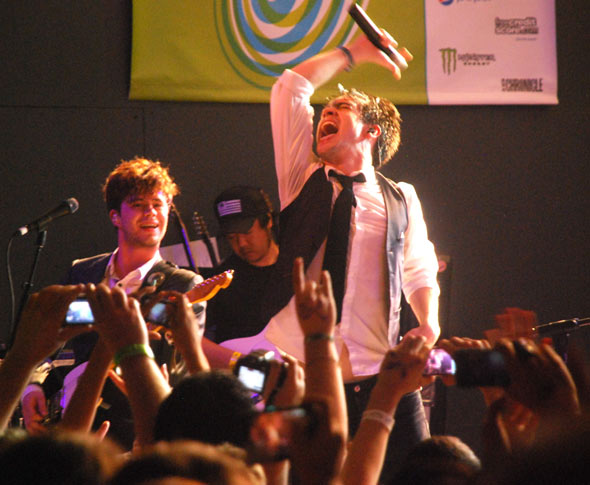 Click here for photos of Panic! At the Disco at Roseland Ballroom in New York, NY on February 4th, 2014 in the QRO Concert Photo Gallery

Click here for photos of Panic! At the Disco at McKittrick Hotel in New York, NY on October 8th, 2013 in the QRO Concert Photo Gallery

Click here for photos of Panic! At the Disco at SXSW 2011 in Austin, TX in the QRO Concert Photo Gallery

Mischief Night is typically a night where adolescents too young to drink and too old for mommy stock up on toiletries try to cause havoc among the neighborhood.  Besides the stories of the night before and the physical evidence hanging in the tree the next day, Mischief Night tends to be more of a low-key inconvenience than day to look forward to.

But in Huntington, NY on Sunday, October 30th, the streets were lined with people of all ages wearing everything from devil horns to a full-fledged roller-derby girl.  (skates included).  On this painfully brisk night, they were not looking for a cheap thrill in vandalizing.  Instead, the thrills were found inside The Paramount Theatre (QRO venue review) for Panic! At the Disco.

In the same way people dressed in costume, the stage was decorated in a pre-Prohibition era style.  The screen-printed logoed backdrop was scrapped for this performance and replaced with a billowing stage curtain.  The stage was also adorned with movie set lights and organ pipes that further amplified the acoustics.

Opening for Panic! At the Disco was a veteran of the same music genre Panic! At the Disco has made their own for the last six years.  Now in the midst of a solo career, Fall Out Boy vocalist Patrick Stump came out in a robin-egg blue two-piece suit and a rather impressive hairstyle.  The whole ensemble mimics that of his solo debut entitled Soul Punk.  Stump proceeds to introduce himself and bust out in a dace-hall classic – “Let’s Dance” by David Bowie.  The crowd was very familiar with his work with Fall Out Boy but it almost seemed that what we were watching was someone who had matured over time while keeping the youthful charm.  No Fall Out Boy covers were played but a healthy amount of Soul Punk was performed.

Immediately following the band was the headliner.  At this point in the show, all the ghouls and goblins (as well as those who didn’t dress up) have pushed up to see Brendon Urie and co. bring the Las Vegas glitz and glamour to Long Island.  Donned in ‘20s inspired clothing (suspenders included), the band immediately went into a very even mix of their three studio albums.  The energy and charisma was put forth in each song, whether “Time to Dance” or “Hurricane”.  The band also covered a sultry version of Marvin Gaye’s “Let’s Get It On” and “I Believe In a Thing Called Love” by The Darkness – falsetto included.  Adding the “!” back into the name has proved that the band has staying power.  The band starts a U.K. tour in January 2012.