Saturday morning showed signs of a slower start and Panorama '17.... 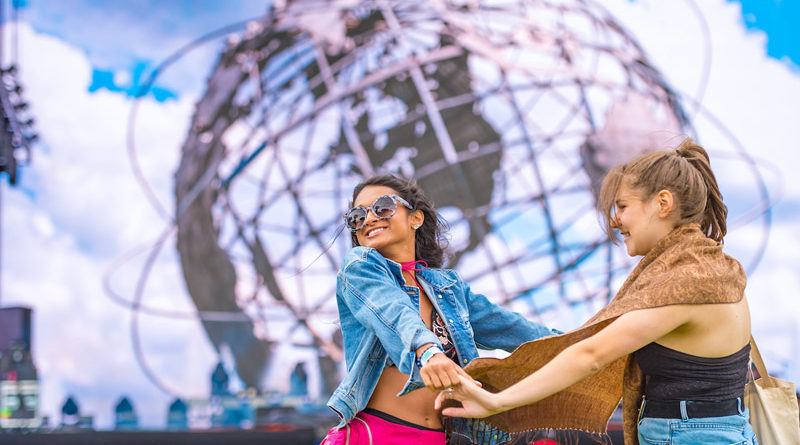 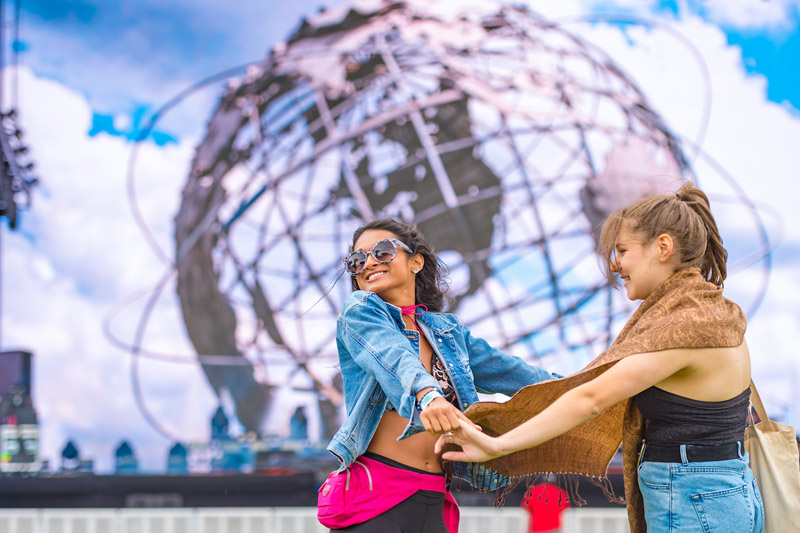 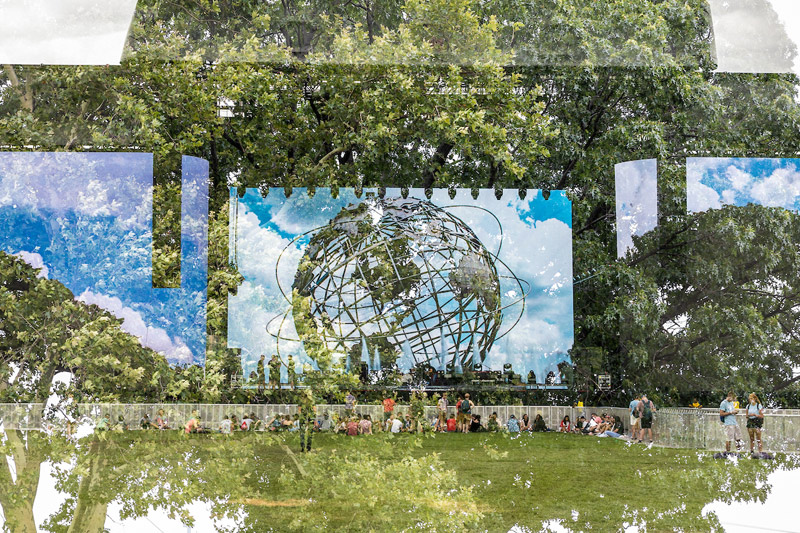 Saturday morning showed signs of a slower start. The absence of lines for the public shuttle bus on the Manhattan side and a shortened line awaiting the noon opening on Randall’s Island offered stark contrast from the previous day. 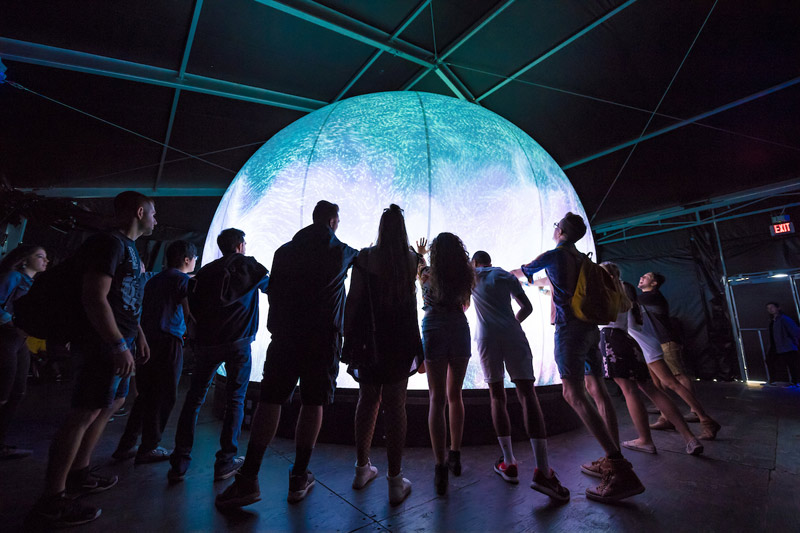 The smaller crowd afforded an opportunity to enter and explore the enclosed spaces of HP’s The Lab. Once inside, high-tech immersive pieces offered a virtual reality experience, many interactive art displays, and finished with a captivating visual finale in a high-ceiling domed theater. 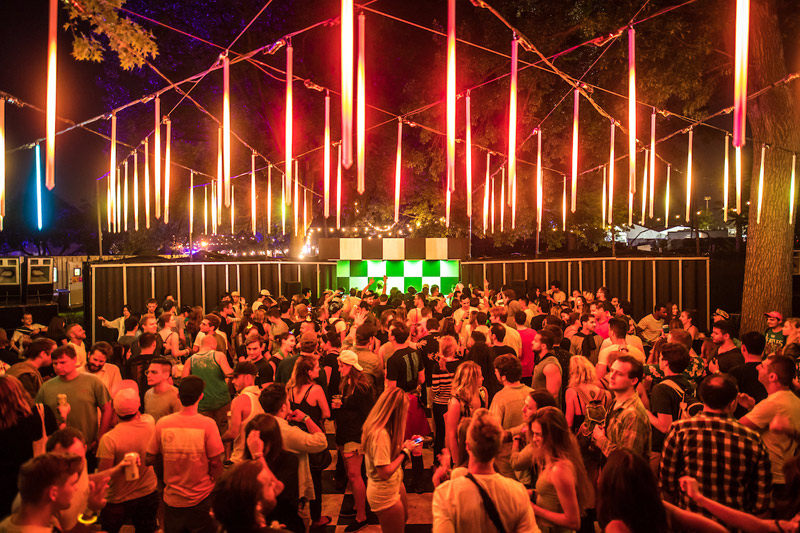 As each day opened with DJ duo Working Women at the Point, the slow arrival of the crowd had the dance party ramp up over several hours. While awkward wallflowers found corners to hide in for the set of Jayda G the party exploded with Mister Saturday Night on through the rest of the night. Bubbles, unicorn furries, and a break dancing all attracted to the sounds of Powder, Huerro S. b2b Anthony Naples and the night’s eventual closer, Motor City Drum Ensemble. 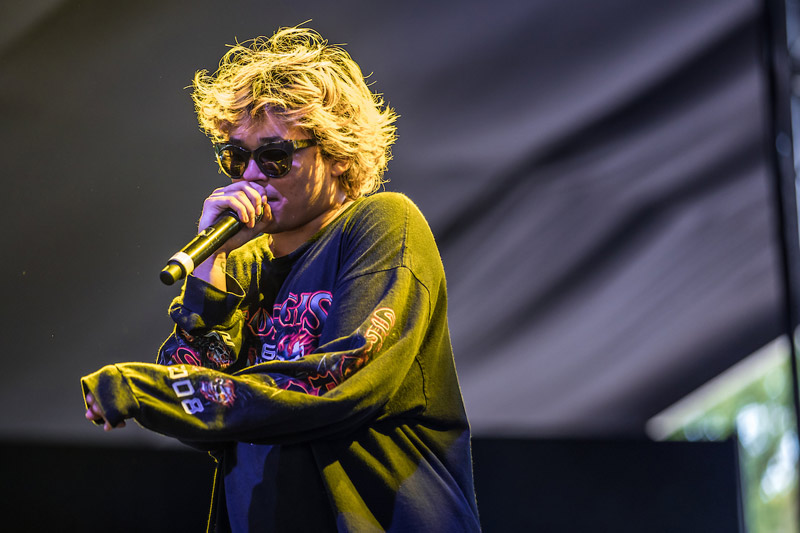 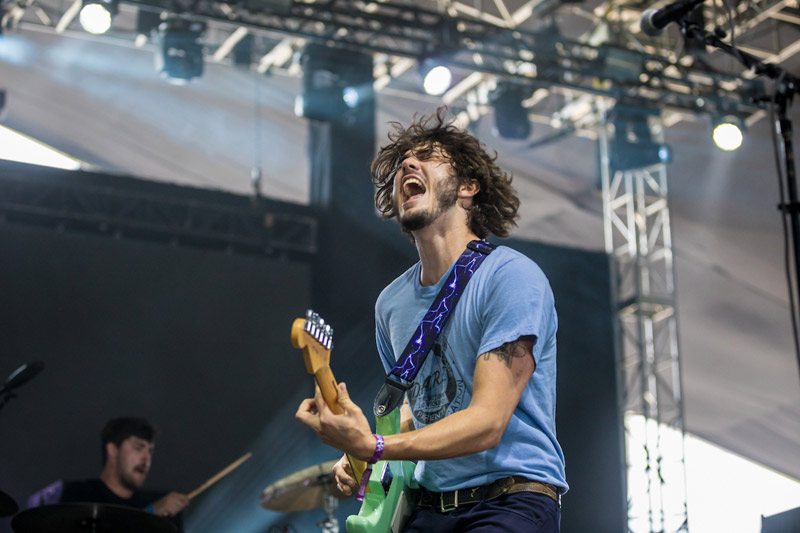 Segueing into dissonant rock Active Bird Community kicked it up a notch at The Pavilion as the floor opened up into mini mosh pit. The straightforward rock ensemble tore through a set list of tempo changing tracks that quickly shifted the feel of the music. 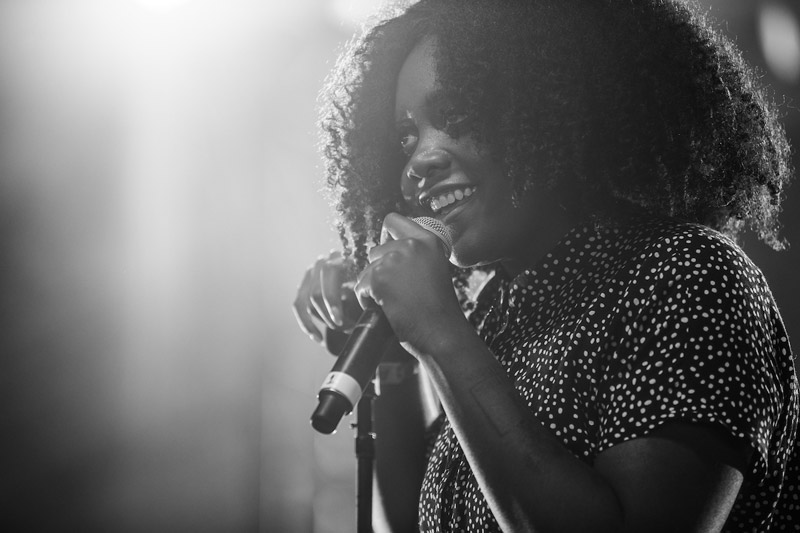 The first real draw of the afternoon was R&B focused artist Noname. Clouds of smoke arose from the audience as active concertgoers finished lingering stanzas and participated in a call and response of “Noname, Noname.” The musical style offered loose swinging drum rhythms and an active five-string jazz bassist plucking out flourished leading lines. The jazzy backdrop encouraged the lyrical poetic spoken words that kept a chilled out crowd rolling along. 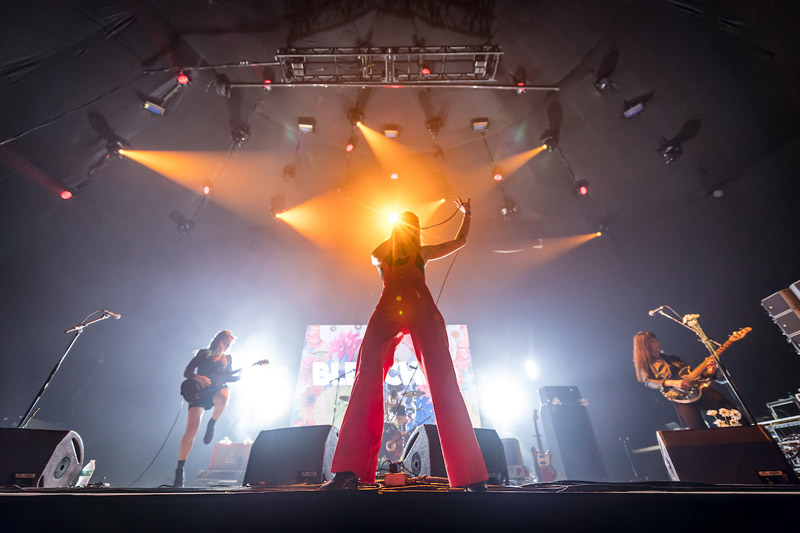 Chris McClenney was an unfortunate victim to the previous day’s partial floor collapse of The Parlor and resulted in a cancelled appearance. Instead crews could be seen actively working to prepare the completely renovated interior in hopes to host the later scheduled evening acts, which opened at 3:00 PM for Bleached. On the still elevated stage daisies decorated amps and mic stands while the Los Angeles punk band expressed their happiness in the festival’s ability to work through the night to reconfigure the layout and make the grounds accessible. The band injected their cover version of the Nirvana track “Territorial Pissings” into the set and requested backup singing “Wednesday Night Melody”s opening refrain of “bop bop bop…” 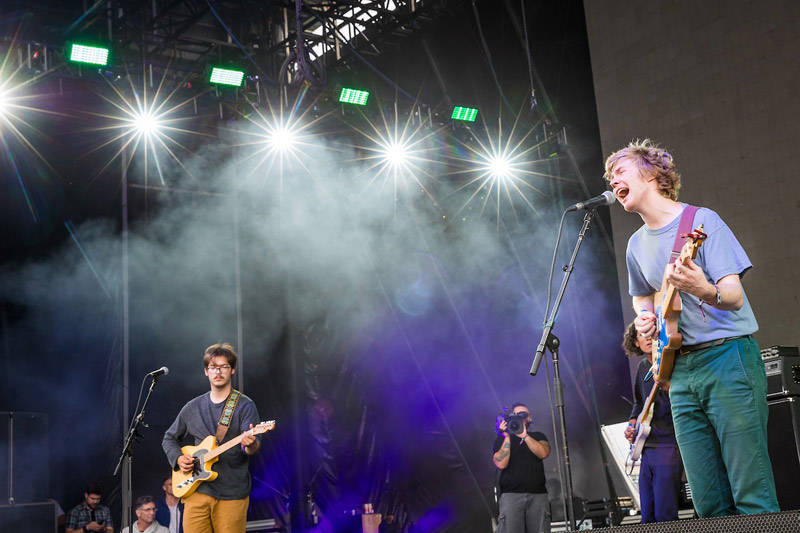 Pinegrove come from New Jersey, but have a sound much more akin to Appalachia, with lead singer Evan Stevens Hall sounding more like a King of Leon. Their laid-back emo-pop sound was nice enough for this early in the day on the Panorama Stage. 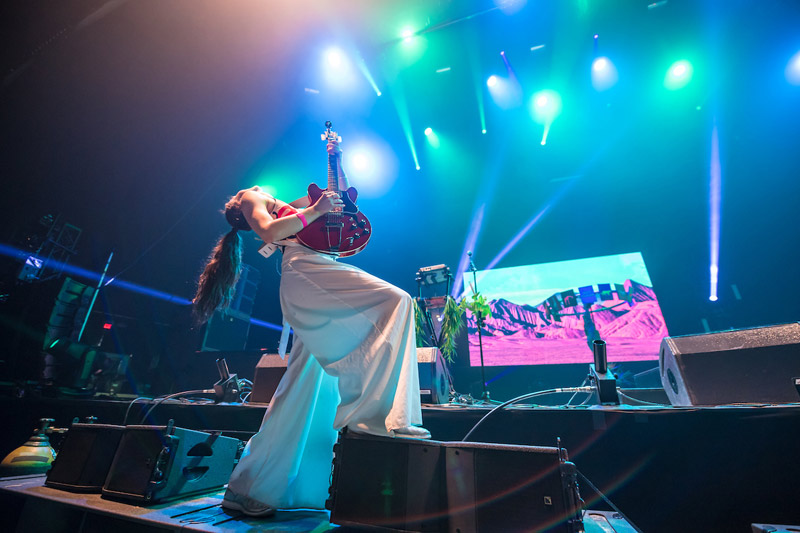 New York-based duo Sofi Tukker, made up of Sophie Hawley-Weld and Tucker Halpern, brought a dazzling stage performance to The Parlor tent. Synchronized dance moves coupled with and their drumming on a fascinating homemade contraption, consisting of a series of electronic drum pads, offered a visual spectacle unmatched elsewhere. A jungle atmosphere was provided with the stage embellished with tall grasses and leafy plants and the big screen projecting tiger prints. Long entrance lines had some sneaky kids slipping in through the emergency exits. 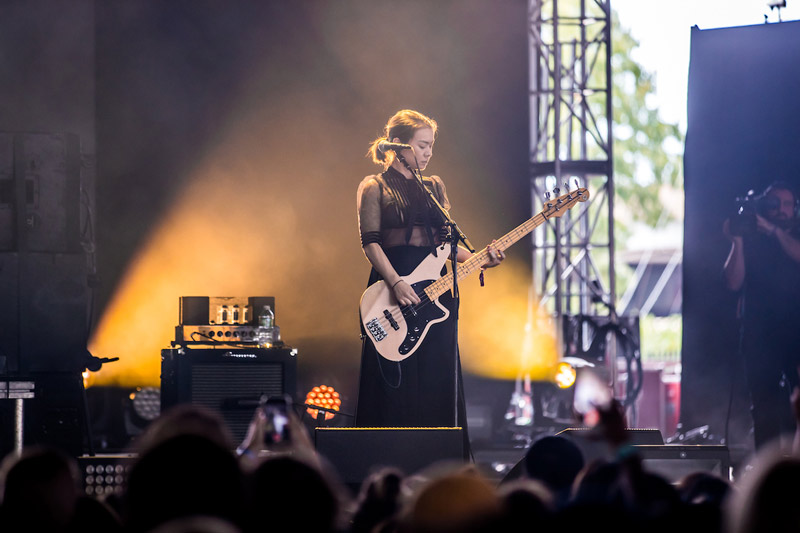 Soft-spoken Mitski Miyawaki, better known by her mononym Mitski, fronted her band for a set on The Pavilion’s stage. The singer/bassist mesmerized the audience with her hard bass-driving tracks and still stage presence. The essentially non-existent stage show somehow juxtaposed the audio fury leaving the audience to focus solely on the music.

With the opening notes from Jagwar Ma, the clouds parted and the sun finally broke through at the Panorama Stage. The dominating synthetic bass lines swelled over the mass of picnic blankets spread across the main stage’s field. A good portion of the evening crowd took the time to relax upon the grass while soaking in the sun and music. 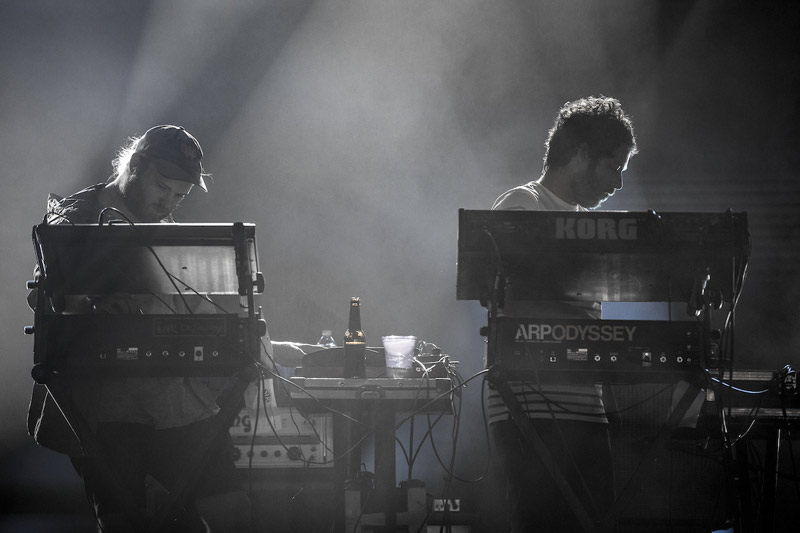 Rocketing into the collective conscious, thanks to their theme song for Netflix’s hit series Stranger Things, S U R V I V E grabbed the midday slot at The Pavilion. The four-piece lugged out their vintage hardware synths and stood four across as they played without the reliance of prerecorded tracks. Sweeping through filtered sounds and tapping out sixteenth notes the band performed live without synching their machines to a digital sequencer.

At The Parlor, long lines for Matoma had concertgoers wrapped halfway around the domed enclosure. The general admission section slowly leaked people in while the VIP lines were at a near standstill. Luckily for those waiting, and due in part to the reworked interior as a result of the previous day’s partial floor collapse, the sound was clearly audible on the outside. Those who made it inside partied with the singer and his DJ as compressed air jets pumped smoke into the air. 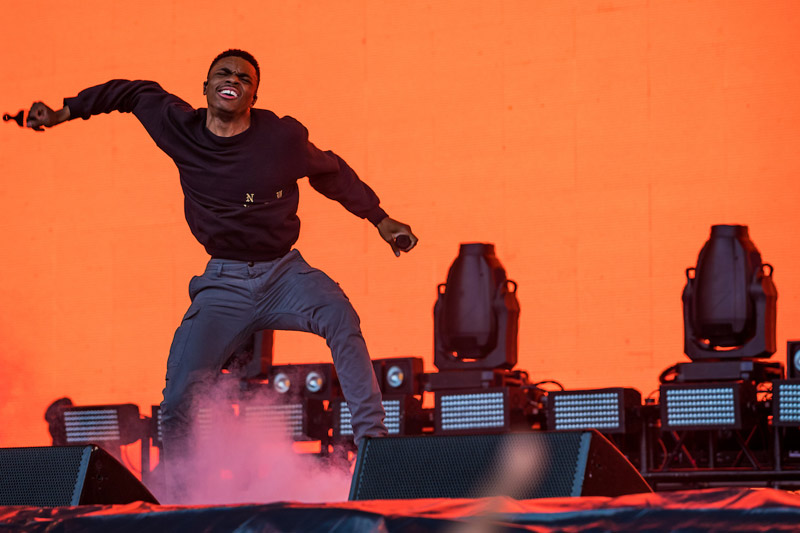 Stage props, backing band, dancers, and DJs were all absent from Vince Staples set on the Panorama Stage. The lone rapper drew the largest crowds of the evening with a fantastically minimal show. The only adornments were an orange backlit screen and an orange filter projecting his live performance for the audience across the field. The artist also skipped the interstitial commentary and only varied his performance’s energies when the music called for the appropriate emotional changes. The commanding presentation begged a later set time instead of the curious midday scheduling. Particular note should also be made of the camera people, who got in tight on him and displayed it on the big screens behind Staples, making him larger than life. 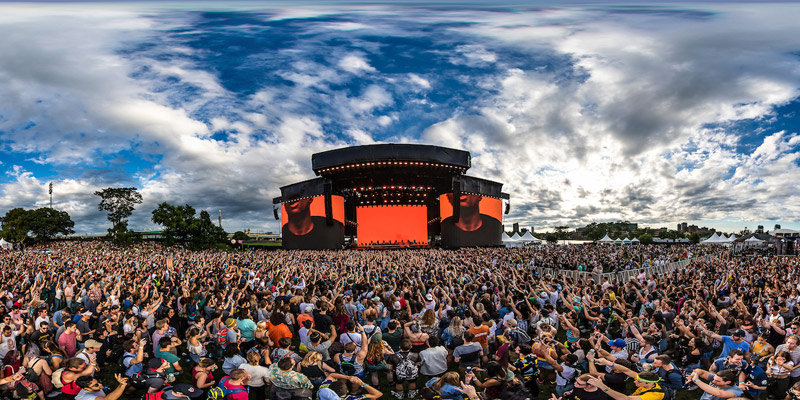 When the line-up was announced for Panorama ’17, Belle & Sebastian seemed like unfortunate outliers, too old and too indie-precious for the young, dance-heavy festival. However, that was anything but the case. The Glasgow band from the nineties (who, unlike most of their contemporaries, never broke up) was full of fun and energy at The Pavilion (Scots seem to always have on stage, even the sad acts). Singer Stuart Murdoch put on a Mets hat for “Piazza, New York Catcher”, and later walked on the photo barrier (catching even security by surprise) to bring up fans to dance on stage. Note that those fans seemed to have been almost exclusively young ladies; even Murdoch noticed, when he got them to snap along him, “Like The Jets & The Sharks – if The Sharks were all pretty women…” It was great to see veterans still having fun like young acts – and the young artists of Panorama would be very lucky if they have the longevity & success of Belle & Sebastian. 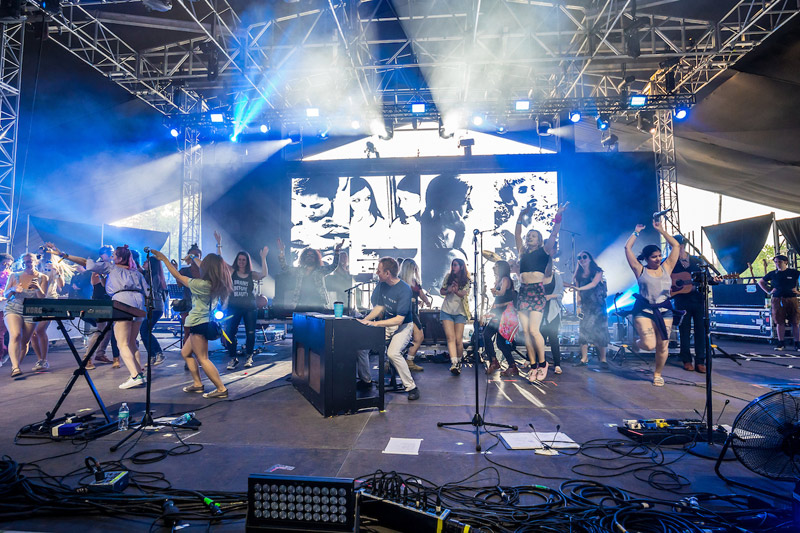 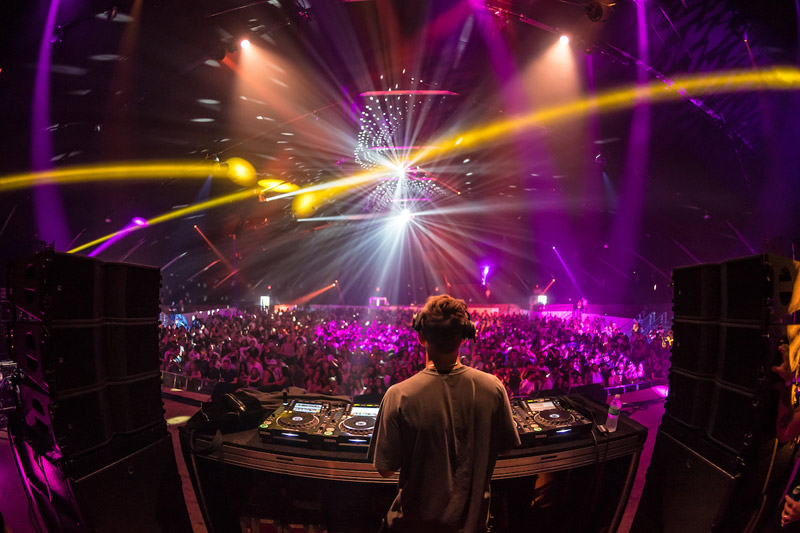 In a back-to-back DJ setups in The Parlor, Hot Since 82 offered an easily accessible entry. Scheduled between the powerhouse combination of Vince Staples and indie royalty Belle & Sebastian, the lone DJ had an unfortunate scheduled performance.  In a bid to improve the stage show, the DJ had an assortment of fans backing his turntable setup to increase the visual appeal.

After that, it was back to the more electronic sounds. Nick Murphy, formerly known as Chet Faker, had a nice dance party on the Panorama Stage, and was an enjoyable presence up there. But more interesting was the eclectic dark-dance of alt-J. An unusual act with unusual sounds, it’s still kind of surprising that they’re as successful with the mainstream EDM crowd as they are; indeed, the audience seemed to best know alt-J’s earlier, more frizzle-fried material. Concertgoers were greeted with an elaborate lighting setup that compartmentalized each member into separate sections of the stage. Being lit from all angles, including underneath, the programmed LED lights pulsed and chased and columns of light s cut vertically across the stage. 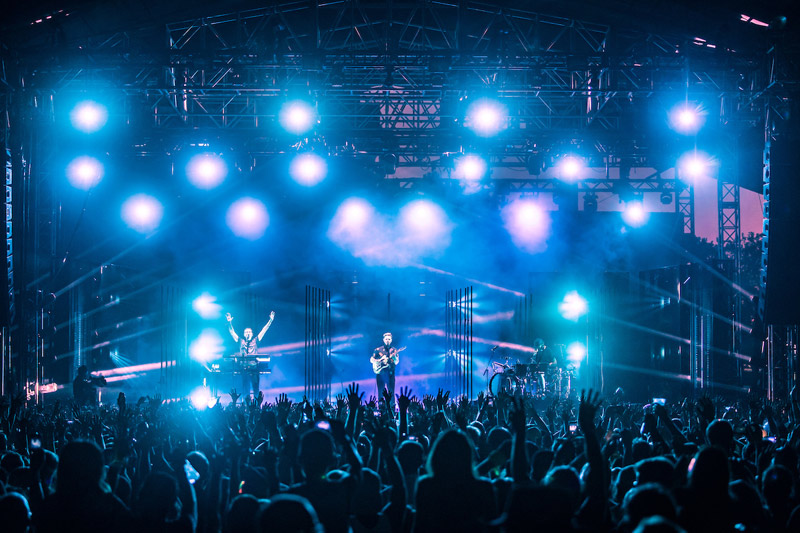 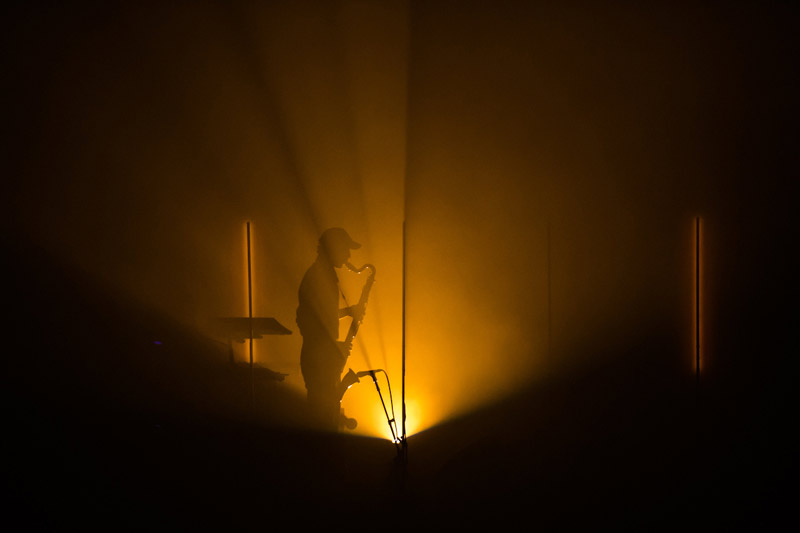 The enclosed Parlor was fully immersed in fog machine smoke as Nicholas Jaar performed for the crowd. Single color swatches of light painted the room in a glow as the artist contributed monotone lyrics over the electronic performance. Originally intended to close the stage for the night, the artist was the lead in for Breakbot, who had previously cancelled due to festival operational issues stemming from the prior day. 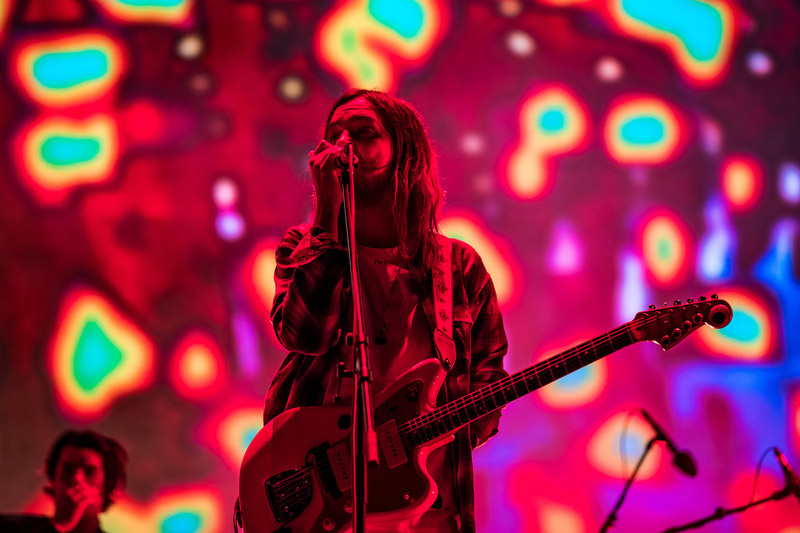 When did Tame Impala get this big? It seems like only yesterday they were another group of garage-psych rockers, who happened to hail from Perth in Australia, with 2010 debut Innerspeaker (QRO review). But now they headlined Saturday at Panorama. Even frontman Kevin Parker seemed astonished, guessing that this was the biggest American show that the band had ever done. Yes, the crowd was nowhere near the size of Frank Ocean’s night before, but still considerable. 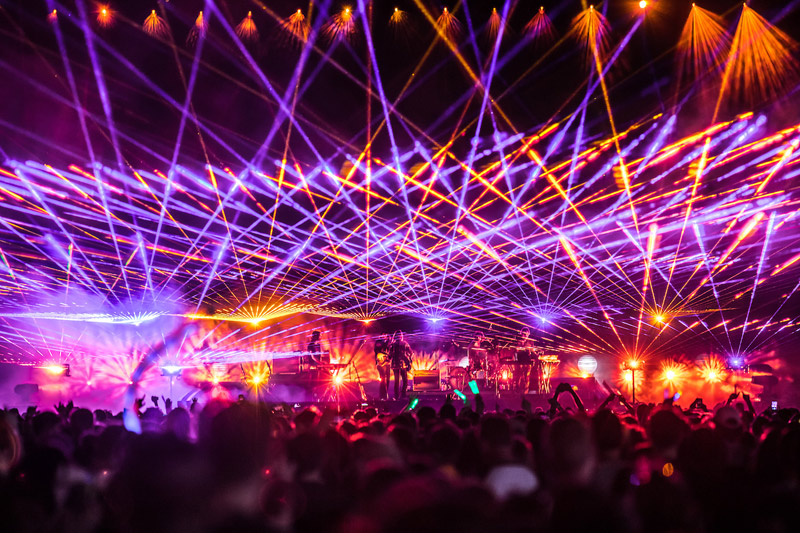 The disco/funk hybrid band Breakbot got their opportunity to play the Parlor after the previous day had their set cancelled. Collecting a growing audience as those peeling off from the main stage sought other musical acts the group closed out the stage for the night. 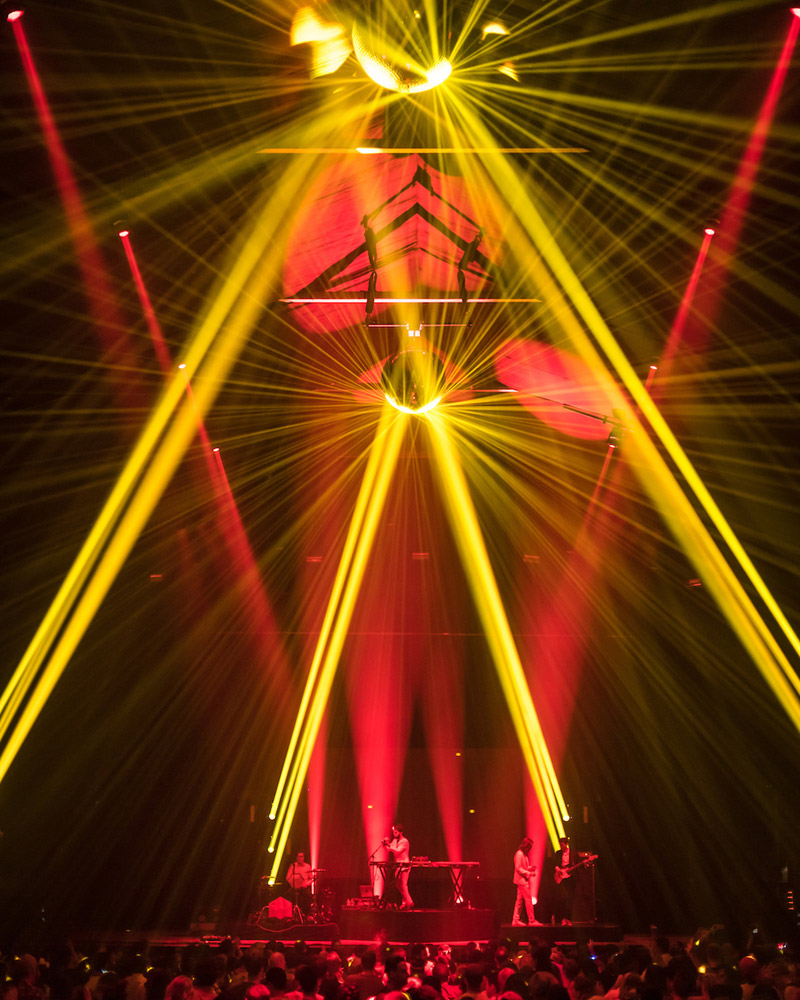 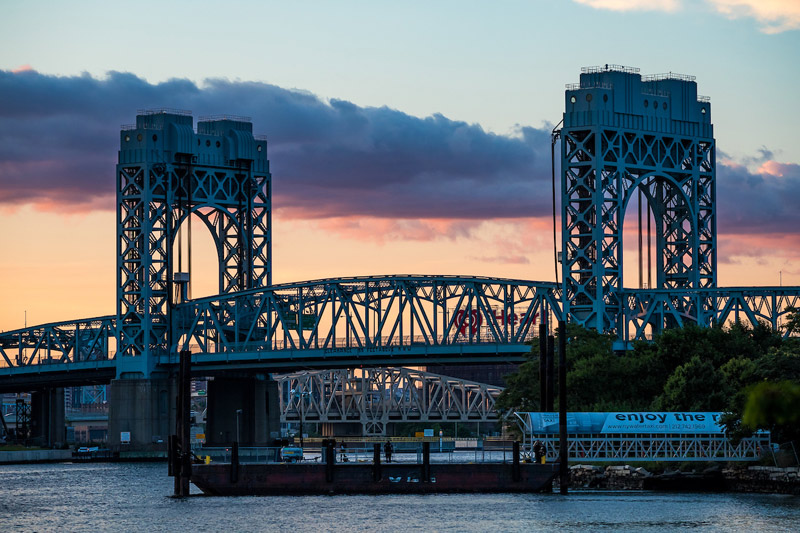