After another disappearing act, Nashville’s Paper Route have once again returned – in full, with the sixteen-song 'Real Emotion'.... 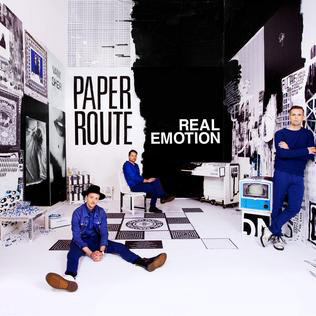 After another disappearing act, Nashville’s Paper Route have once again returned – in full, with the sixteen-song Real Emotion. ‘Emotion’ is definitely present on the over-packed, synth-led album.

There is a lot of electronica around these days, widening the styles, and Paper Route cover a good deal of it on Real Emotion. “Writing On the Wall” is an electric explosion out of the gate (after the sub-minute “Intro”). The group expands and reaches for the sky with “Pretend” and “Balconies”. There’s synth-torch on such numbers as “Untitled”, “Second Place”, and “Zhivago”. Bigger emotion comes in the form of the title track, while the following “Mona Lisa” is synth-pop. Special mention must be made of the winking-dark single “Laugh About It”.

With such a large record, some of the styles you’re gonna like more than others, and it does feel like a little more pruning could have been done. But that is all just reflective of Paper Route’s greater ambition.