Paul McCartney opened his ‘Got Back’ tour at the Oakland Arena with “Can’t Buy Me Love”, and shortly thereafter promised the audience, “Old songs, new ones, in between ones.”... 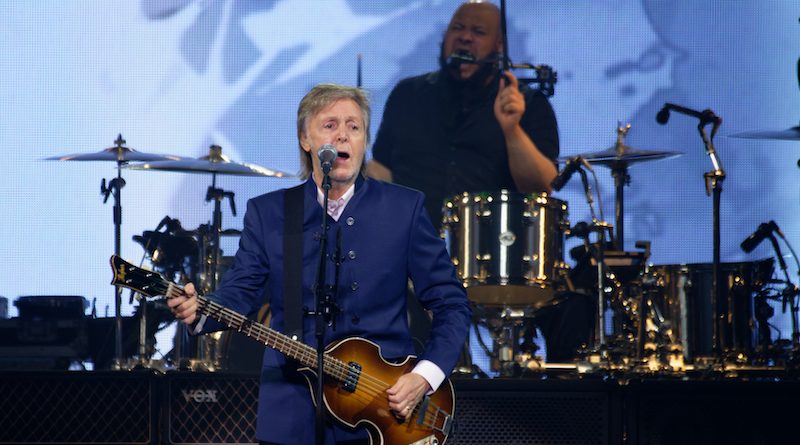 Paul McCartney opened his ‘Got Back’ tour at the Oakland Arena on Friday, May 6th, with “Can’t Buy Me Love”, and shortly thereafter promised the audience, “Old songs, new ones, in between ones.”  His 33-song set delivered not only a compendium of McCartney’s musical career, but also a visual feast and nostalgic moments.

A prodigiously talented musician (playing a bass, three different guitars, a grand piano, his “magic” upright piano, a mandolin, and a ukulele Friday night) and songwriter, McCartney is a charismatic performer who made a packed arena show seem intimate through storytelling, visuals, and whimsy.

Employing lasers, moving light rigs and pyrotechnics, the light show was a display of technical brilliance which added a festive ambience. Even more impressive was the use of images: anime-esque scenes of The Beatles, bright animated flowers growing from a post-apocalyptic landscape, sign language version of “My Valentine”, homage to pioneering women during “Lady Madonna”, psychedelic animation, sky lanterns.

The two most poignant visual moments: Peter Jackson isolated John Lennon’s voice which enabled McCartney to sing a touching virtual duet version of  “I’ve Got a Feeling”. Playing the ukulele George Harrison gave him, McCartney began a simple rendition of “Something” before cutting to video of Harrison singing his song while the band joined, adding the robust musical backdrop. The juxtaposition of John Lennon and George Harrison video and Paul McCartney live manifests the theme of the past’s impact on the present.

The show deftly melded nostalgia with lighthearted fun. McCartney noted that looking out at the audience while playing the old songs the band sees phones making a “beautiful galaxy of stars.” But, the new songs yield a “black hole.” Undeterred, he said, “We’re going to play them anyway.” The audience reciprocated his next offering with the “stars.” Drummer Abe Laboriel Jr.’s impish dance montage highlighted 20 years of group dance from the Macarena to the Fortnite floss. Plumes of fire and fireworks (!) surprised and delighted during “Live and Let Die”.

For the start of the encore, McCartney carried a Ukrainian flag on stage, followed by band members carrying the Stars and Stripes, the Union Jack, the California flag, and the rainbow flag. Small gestures like this, and the many acknowledged in his visuals, made people feel noticed and valued.

For all of his talents, accomplishments, and that fancy title, on stage Paul McCartney is authentic, serious, playful, humble. He, his band, and the Hot City Horns did exactly what a fan’s sign thanked them for “bringing us joy in these dark days.”

The Head and The Heart – Every Shade of Blue