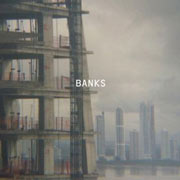 Paul Banks is probably the last member of Interpol who should make solo records.  He’s not a significant guitar player or lyricist, and though his baritone is unique – and squares well with Interpol’s dark, metronomic approach – it sounds stiff and out of its element on these warmer, more hodgepodge songs.

Many of the pieces are dominated by obtrusive keyboards, and others sound aimless because they can’t decide whether to let keys, guitar, vocals, or drums drive the song.  And most of the playing is just serviceable, though Banks has gamely taught himself the drums, and is pretty good on “I’ll Sue You”.

Feels lazy to say it, but the best tracks are the ones that sound like Interpol, especially “Paid For That”, which gets a big boost from Sebastian Thomson’s drumming, “I’ll Sue You”, and “No Mistakes”, which cribs lightly from Interpol’s “Lights”.

Click here for photos of Paul Banks at CMJ 2012 in New York, NY in the QRO Concert Photo Gallery

The worst two are the bombastic instrumental “Lisbon” and “Another Chance”, such a terrible idea that it’s amazing Banks didn’t realize it.

Though he’s generally a mediocre lyricist, Banks has long been an interesting one: his robot-voice makes the line between banality and magic very fine.  One normally wouldn’t give a second listen to anyone else intoning, “That makes these feelings grow stronger,” but there’s something to it on “No Mistakes”.  It’s funny and sweet, like a robot-boy trying to sound human.

Listen to the titular refrain in “I’ll Sue You”.  One wouldn’t recommend that anyone else have their band drop back so that they can croon, “I’m suing you,” but for Paul Banks, it works pretty well.  He pushes it on “Paid For That” with “Changed by Folk Implosion / When I was seventeen,” which one wouldn’t exactly call magic, but it’s pretty funny.

Unfortunately, these and others are but a handful of lines surrounded by banalities that are only banalities.  The last four songs would have made a nice EP, but this isn’t an album.

Paul Banks – Paid For That