<img src="http://www.qromag.com/wp-content/uploads/2010/04/greatwavesinterview2.jpg" alt="Great Waves" />QRO caught up with Paul Beeman, of Washington State's Great Waves, after they won the Sound Off EMP competition. ... 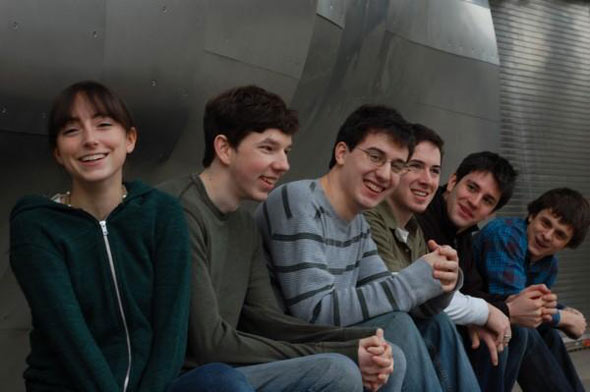 In QRO’s first interview with Great Waves, the young Americana quartet out of Sammamish, Washington was on tenterhooks, waiting for an invitation to the EMP Sound Off, the largest underage battle of the bands in the Northwest.  Not only did they receive the invitation – they won the whole damn competition!  Riding the promotional tidal wave that is QRO, how could they fail?  QRO does a victory lap with Paul Beeman (bass), who dishes on tennis club musicals, the competition, and the next EP.

QRO: Where were you guys when you got the invite?  How did that go down?

Paul Beeman: I was at work; got a call from Will [Holmes, guitar]… I think we were all at work.  Ashley [Bullock, vocals] and Will were doing a ‘Christmas performance’ at the tennis club that they work at.

PB: They were singing this really crappy Christmas song we wrote and then they got the call, and just stopped, walked off the stage.

QRO: Who’s the audience for the ‘Christmas performance’?

PB: According to Ashley and Will absolutely no one, except maybe their boss.

QRO: OK, so you got the invite.  Can you explain a little bit what the EMP Sound Off is for people who wouldn’t know?

PB: Pretty much for Portland, for Seattle, and for Vancouver, it’s the biggest underage battle of the bands for bands that are younger than 21.  All the Pacific Northwest is able to apply and twelve bands get in.  There’s three semifinals with four bands each.  Out of those, three bands make it in and then one wildcard band.  Then whoever wins gets to play Bumbershoot [Seattle Music & Arts festival – QRO Festival Guide], gets a bunch of other stuff, and publicity.

QRO: How long does the actual competition last?

PB: A month long, I guess, including the semifinals and finals.

QRO: Oh, really?  That’s pretty intense.  Good that everyone gets a chance to really play…

QRO: So tell me how you felt during the process?  Any nerves?  What kind of stuff did you do to prepare?

PB: Well, we frantically tried to write a few new songs, before we finally succeeded at the last second.  Of all the twelve bands, we were the third out of four semifinals, and the third out of four bands to play… so we almost got to see everyone band play before us.  That was really intimidating because they were all excellent, but it gave us extra time to prepare, which we really needed… to finish up the songs.

Yeah, there were a lot of nerves, also a lot of excitement.  I think that’s probably what made the show what it is, because usually we don’t play in front of so many people.  It was a whole different experience and it kind of amped up our level of intensity.

QRO: Yeah, Ryan [Sprute, drums] and Ashley mentioned in the last interview that if you did get the invite you would go into "full practice mode".  So you did that, and kicked out some new songs to boot…  What are the new songs that you played that weren’t on your EP (QRO review)?

PB: A lot of them don’t have names yet…  We have one that’s called "Hours", H-O-U-R-S.  And that’s going to be on our next EP.  It’s going to be a little bit dark; you can check it out on our YouTube channel.  We’re going to try to orchestrate it pretty heavily.  We’ve got another song called "Stage Hands", but I don’t think we’ll be recording that.  Maybe way down the line.

And then we have a few more songs for the EP… that are a little more… ‘rock’… than what we’ve been doing in the past.  I don’t know, I’ve been listening to a lot of [note: inaudible: possibly Gwar?], In Rainbows (QRO review), Portishead, and stuff like that.  We’re going to experiment a little more on this next EP, now that we’ve gotten into Sound Off, that’s our goal.

QRO: I did hear some of the YouTube stuff, and it did catch me by surprise.  From the EP I got this more country/folk vibe, but the live stuff I heard sounded totally different.  Um, it sounded way more ‘rock’; it sounded really good.  I saw one clip of "Blue Blood" with the feedback going in the background, a long drone-y thing…  Is that more of the ‘rock’ direction you might have pulled out from live performances?

PB: Yeah, we definitely wanted to amp up the live show and get the crowd going.  Especially since – well, the crowd is a lot of the families of the band – but it’s also a lot of younger kids.  So you kind of amp it up and make it a little more noisy, more fun to play.

PB: For our next EP, it’s going to be different.  Not straightforward rock by any means.  But the thought with the first EP was we wanted to play it a little safe so that we could get into Sound Off.  This next EP we really want to experiment with it.

QRO: Cool, so you’ve won the Sound Off, you’re doing the victory lap, and you’re looking forward to your EP.  Any plans for touring?  Are you going to stick around the Northwest for a little bit?

PB: Um, definitely for a little bit, to try to build up a bit of a fanbase.  Maybe after this EP, we’re thinking of going down to Portland, to California…  I mean, who knows if we will or not, but it’s sort of a tentative plan at this point.  Hopefully.

QRO: Awesome, we’ll keep an eye out for that.  Thanks so much and congratulations again!

Drink Up Buttercup : Born and Thrown On a Hook