For reasons I cannot explain, there's some part of me wants to listen to 'Graceland'.... 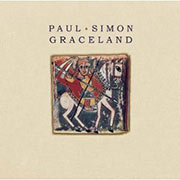 It’s the twenty-fifth anniversary of Paul Simon’s Graceland, and there might not be a more important, more seminal, more excellent album in those twenty-five years.  The already-legendary musician’s 1986 trip down to South Africa, which was still under the final days of apartheid then (Simon was criticized for breaking the cultural boycott at the time, but did it to get access to, and bring worldwide attention to, South African artists, most notably Ladysmith Black Mambazo – QRO photos), brought African music to much wider attention, and blended it with American singer/songwriter pop (not to mention New Orleans zydeco & southern blues).  It basically created the idea of ‘world music’, of blending traditional and modern styles of music from around the globe.  It also introduced afro-pop rhythm & sound, which has more recently come up in acts like Vampire Weekend (QRO live review) and others.

And it’s also just an amazing album, so for the twenty-fifth anniversary it has been given the deluxe edition treatment with some nice demos and alternate tracks, plus a behind-the-scenes look at some of the crafting of the seminal record.

If you’ve heard Graceland already, you don’t need to be reminded how great it is.  If you haven’t heard it, go out and get it right now.  Every single one of its eleven tracks is a classic, inventing a new afro-pop sound while also sounding familiar, keeping a strain through each piece while also being diverse.  Simon babbles perfectly over afro rhythms on “The Boy In the Bubble” & “I Know What I Know”.  He’s sweeter (but still world-wise) in “Diamonds On the Soles of Her Shoes”, and almost spiritual in his rise upward “Under African Skies”.  N’Orleans gets in on the action with “That Was Your Mother” (which could be called the overlooked track on Graceland, if any track on it could be called ‘overlooked’), while Ladysmith Black Mambazo bring their a-cappella harmonies to “Homeless”.  “You Can Call Me Al” is the perfect single (with the perfect, Chevy Chase-assisted video), with its utter catch, while closer “All the Around the World Or the Myth of Fingerprints” is the perfect culmination of the amazing record.

Extras on the 25th anniversary CD release include a soft, stripped demo of “Homeless”, like a lullaby, and an unreleased alternate take on “Diamonds” where it is reduced to just vocals and bass (and “Diamonds” has one of the best bass lines on a record full of amazing bass lines).  It closes with “The Story of ‘Graceland’ As Told by Paul Simon”, where the songwriter details the making of the iconic title track, mixing African, New Orleans, American country-blues, and more.  He even talks about how the title was originally just a placeholder, “Since it isn’t really about Graceland,” but could never find another word to put in its place, so he took that as a sign to actually go and visit Elvis Presley’s home for the first time ever:

If you’ve already got Graceland, you probably don’t need the 25th anniversary deluxe edition, though the extras are definitely nice.  But make sure that you do have it, a rare record of the last twenty-five years that should be in everyone’s collection, on everyone’s iPod – and never loses its power or charm.

Paul Simon’s “The Story of “Graceland'”: