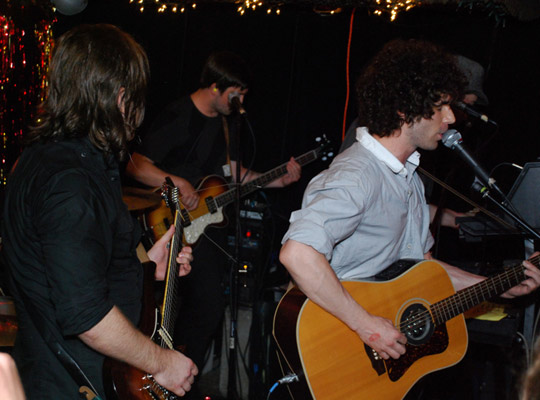 Click here for photos of Paul & The Patients at CMJ 2009 in New York, NY in the QRO Concert Photo Gallery

Click here for photos of Paul Holmes with Noel Heroux at Bell House in Brooklyn, NY on October 3rd, 2009 in the QRO Concert Photo Gallery

Click here for photos of Paul Holmes at Piano’s in New York, NY on April 12th, 2008 in the QRO Concert Photo Gallery

Bigger & better things are in store for Paul & The Patients.  The group, based around singer/guitarist Paul Holmes (pretty much any guy with the last name of ‘Holmes’ sounds like a porn star – even Oliver Wendell Holmes, of the Supreme Court…), has been plugging away for a while now, but things look brighter than ever at this moment: just signed to new up-and-coming NYC imprint American Myth, and just out with the excellent To the Lions EP (QRO review).  And they played a strong EP release party on Friday, June 19th – and maybe after this, they’ll be playing places larger than the Bowery basement venue Cake Shop (QRO venue review).

The release party wasn’t exactly set up perfectly.  It was a late show, doors at 10:00 PM, Paul & The Patients scheduled for 11:00 PM, but whoever was playing the early show was taking their sweet time, as, after a seemingly endless load off, load in, Paul & The Patients finally started just a few minutes before midnight (and, according to Noel Heroux of the following Hooray For Earth – QRO photos – one those bands, though he wouldn’t name names, “sucked”).  It was also not a free show, despite the venue’s website said; yes, only six bucks, but still…  And Cake Shop is always a cramped place, but even worse when you’ve got five people in your band. 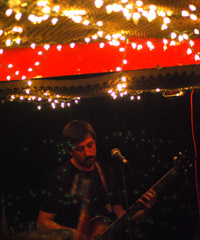 Of course, Cake Shop was also packed with fans, there to join in the celebration of To the Lions.  However, Paul & The Patients only played two songs from the EP; if a band has to work long & hard to get some record released, they’re often tired of those songs & on to new ones by the time the record is actually out, but it was still too few for a release party – especially when that EP is so good.  Thankfully, P&P did include standout-among-standouts “Black Beards”, with its darker procession even more evocative live.  But only that and EP opener “Complaint 15” were on the set list, and right next to each other; the set – any set, really – could have used the damn-near-perfect “Blogspot”.

But maybe that catchy-sad, Beatles-esque piece wouldn’t have fit with the night, which was a decidedly darker one.  Opener “A B” saw a burgeoning storm coming: is it a cleansing rain, or a shuddering thunder?  After the two To the Lions tracks came “Song For Suicide”; a bit of a thudder, a little leaden, but held up by Holmes’ vocals.  Paul & The Patients grew with the expansive “Post-Show Blues”, which had a great quiet shock in the middle that allowed for another build.  “Pennies” was a short & sweet rocker, but “Tiny Red Light” returned to the sad expanse, showing the width & breadth of P&P.

Yes, the crowd was stocked with friends of the band (and swear that Paul Holmes’ mother was in the crowd – as well as Mrs. Heroux…), but Paul & The Patients didn’t disappoint them or anyone else.  Now it’s on to more – much more… 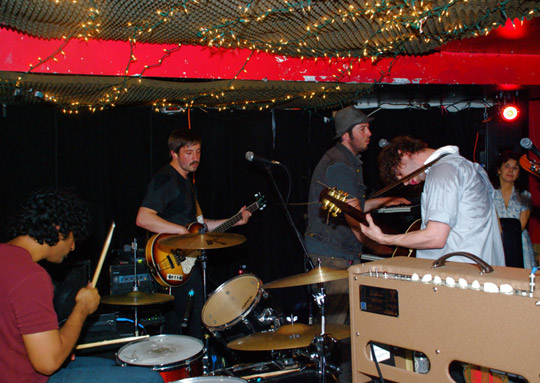