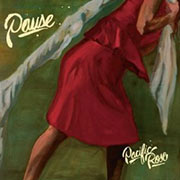 According to his website, Pause first came on the scene fronting brass-ensemble funk bands in West L.A.  His first album, Pacific Rose, while certainly a rap album, also shows off the wider range of skills he gleaned over the course of those years.

Pause enlists Double K of People Under the Stairs to provide some beats, verses and production on Pacific Rose, and it’s a boon for the album.  As an added bonus we get to hear a little more of Double K, who was always the underrated half of P.U.T.S.  This album could certainly end up being Pause’s The Next Step – a set of tracks that are simultaneously effortless and affecting (sans the Tony Hawk spot, though winning songoftheyear.com’s Hip Hop category might be its modern day equivalent).

One of the most surprising aspects of the album is its spiritual kinship to the CunninLynguists unique dirty south style production.  Songs like "It Keeps on Raining" and "Cocaine" especially would not have been out of place on Will Rap for Food or SouthernUnderground.  DJ Kno would be proud.

"Caroline" is the albums biggest track, winning songoftheyear.com’s Hip Hop category, and it definitely shows off Pause’s R&B chops.  The most exciting aspects of the album though are its detours, like the sample in "It Keeps on Raining" or the collections of clips that starts the whole thing off on the first track, "Comin’ Out of the Darkness".

After the one-two punch of "Comin’ Out of the Darkness" and "Caroline", the album stumbles a bit on "Put Me In the Game" and spends about half of "So Scandalous" finding itself again, but by the time "So Scandalous" wraps, you are fully engrossed.  From there the album just keeps picking up steam.  "Shouts Out" and "It Keeps on Raining" hook you, and "Look At Me Now" has just the right amount of bravado.

"Cocaine" is a brilliant track, downtrodden and despairing enough to set up the perfect high on "That’s How I Do It", probably the best track on the disc.  Ending on a high is great for the album – it leaves you wanting more and tends toward repeat listens, which are recommended.  Look out for Pause’s future releases; there may be an Official Soundtrack kind of genius coming soon.