Pearl Jam’s first proper show in Nashville since 2003 reconfirmed that the band is one of the greatest live bands of all time.... 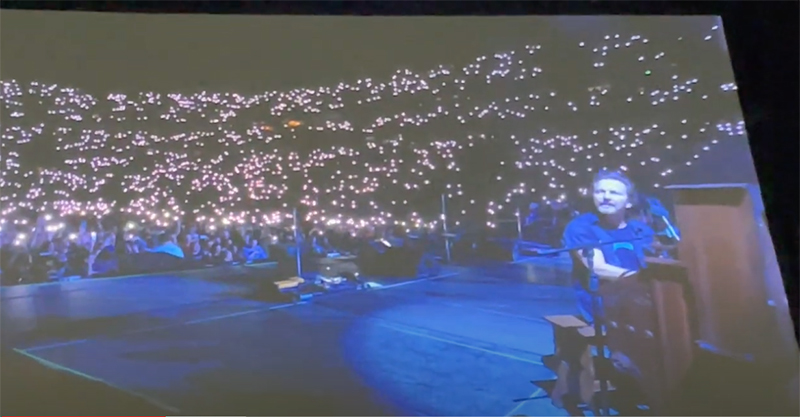 Click here for photos of Pearl Jam at Oakland Arena in Oakland, CA on May 12th, 2022 in the QRO Concert Photo Gallery

Click here for photos of Pearl Jam at 2021 Sea.Hear.Now in Asbury Park, NJ in the QRO Concert Photo Gallery

Pearl Jam’s first proper show in Nashville since 2003, at Bridgestone Arena on Friday, September 16th, reconfirmed that the band is one of the greatest live bands of all time.

Lead singer Eddie Vedder dedicated “River Cross” to the people of Ukraine, and asked the audience to hold up their phones so people in Ukraine could see that we’re thinking about them. A cynic nearby said, “Well now that we fixed Ukraine,” and I thought that if I were a Pearl Jam fan in Kiev and saw this, then it would mean a lot. In that context the song’s closing refrain of “Share the light / Won’t hold us down” packed an emotional punch that you just don’t get from listening to the song.

“Thanks for posting this!  I was behind stage in the nosebleeds and wanted to share with a Ukrainian friend.”

Pearl Jam’s fanbase is so devoted that they will even sit behind the stage. The band walked behind the stage and played “Last Kiss” (a 1998 fan club Christmas single which was played by radio stations and went on to peak at number two in the United States and is still the band’s highest-charting single).  By popular demand, the cover (original by Wayne Cochran in 1961) was released to the public as a single and helped generate about $10 million for refugees from the war in Kosovo.

Vedder dedicated “Corduroy” to  Johnny Ramone, who died 18 years ago last week. He said that “Corduroy” was the song that Johnny liked the most. Vedder inducted The Ramones into The Rock and Roll Hall of Fame in 2002.

Vedder loves to interact with the audience and that’s another reason the bond is so strong. While a lot of people think Vedder is too serious, he actually has a dry and sarcastic sense of humor. In between songs at Bridgestone Arena, he pointed to a fan with a sign and said, “He’s holding up a sign and if I believe what he wrote it’s his 185th show. He’s lying…. it’s his 18th and a half show. He forgot the decimal. This one’s for you, sir. With all due respect.” They then went into “Smile”, which was the song the fan had on the sign.

After “Yellow Ledbetter” closed out the night the band took their bows and Vedder said: “Thanks for having us in this great building, we’d like to come back and play the Ryman, as well.”