<img src="https://www.qromag.com/wp-content/uploads/2009/12/pearljamnov27.jpg" alt=" " />For the first time in eleven years, the world's greatest living grunge band are back down under. ... 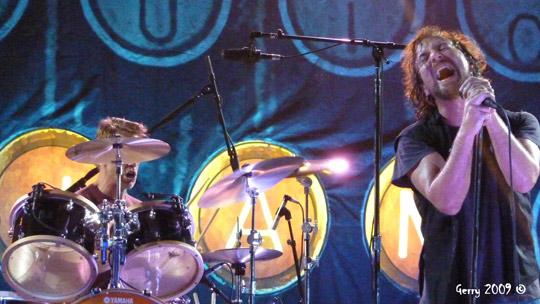 Auckland, New Zealand; Mt Smart Stadium; Friday, 27th of November.  Approximately 40,000 people wait in anticipation.  There are folks of all sorts – Goths, punks, mods, stoners and hipsters.  There are post- and pre-adolescents; mums and dads; grandparents and yes, an infant or two.  All these people are united for one reason.  Two words, two syllables – Pearl Jam.  The air is warm; the crowd is restless.  There is a suffocating haze of anticipation.  They struggled through Liam Finn (QRO album review) and perhaps partially enjoyed Ben Harper and the Relentless7.  But it’s blatantly obvious why everyone is here tonight.  Because for the first time in eleven years, the world’s greatest living grunge band are back down under.

Contrary to the music scene surrounding them, Pearl Jam hasn’t changed much at all.  Frontman Eddie Vedder still wears his hair long, proudly sports a flannel shirt and drinks wine straight from the bottle.  The guitar solos are still long and incendiary.  Their shows are still packed to capacity with fans that still know all the words to the iconic “Even Flow”, and the mosh pit up front still looks about as safe as a minefield.

In regards to the aforementioned mosh pit, Vedder made several comments during the night, warning the rowdy folk to calm down a bit.  His words, “I know you play rough sports on this field, but there’s fucking (thousands) of people behind you, so mellow out.”  Vedder’s message to all of the rioters was to “maintain brothers.”  Admitting to being old school and slightly conservative, Vedder asked the crowd to take three steps back from the stage.  This was met with great applause from the crowd who obviously appreciated Vedder’s concern and awareness of his audience and their environment.

Pearl Jam began with “Daughter”, a track from their second studio album Vs.  And as the first distorted guitar chord resonates from the speakers, the entire stadium is up on their feet and singing their hearts out.

Pearl Jam truly were the pioneers of the 90s grunge movement.  While many other fellow grunge groups had their brief moments of fame, their careers ended as fast as a shotgun bullet enters the skull.  Yet Pearl Jam has withstood the fallout and backlash of the Seattle grunge explosion, and to this day is considered one of the greatest American rock bands.

Eddie Vedder is obviously quite a fan of New Zealand, and complimented the country many times.  “I feel very fortunate to be in New Zealand” Vedder said, and waved a New Zealand flag in the air before launching into the poignant and pitch-perfect “Black”,

Then Eddie introduced us to his “version of surf music,” a new track from Backspacer, “Amongst the Waves”.  Though it clearly was no Beach Boys song, “Amongst the Waves” marks a fresh new direction for Pearl Jam; relaxed, mellow and far less angry.  “Just Breathe”, another new song, stood out as one of the best moments of the concert.  With Vedder on acoustic guitar, “Just Breathe” is a stripped down, raw masterpiece.  Vedder’s surprisingly vulnerable vocals made for a haunting and powerful experience.

But perhaps the most memorable moment of the performance was the unforeseen appearance of Kiwi favourite Neil Finn (Crowded House).  Vedder introduced him as “someone I have looked up to my whole life.”  But if one Finn wasn’t enough, Neil brought his son Liam out with him, and the three played a remarkable rendition of Chris Knox’s “Not Given Lightly”.

Quite unfortunately however, Pearl Jam played neither “Jeremy” nor “Alive”, two of the band’s earliest and most popular songs from debut Ten.  But the absence of these two probably can be blamed on the stadium floodlights that were rudely switched on while the band was still playing.  But they didn’t let that stop them and played a further fifteen or so minutes in the brightness, including a heavy cover of Neil Young’s “Rockin’ In the Free World” and their final song, the Hendrix-inspired “Yellow Ledbetter”.

By the time Pearl Jam had finished, I had seen two separate incidents of fireworks lit off amongst the throngs of people, a person rushed out of the stadium after suffering a head injury, and at least three people escorted out in handcuffs.

So all in all, it was a damn good night.