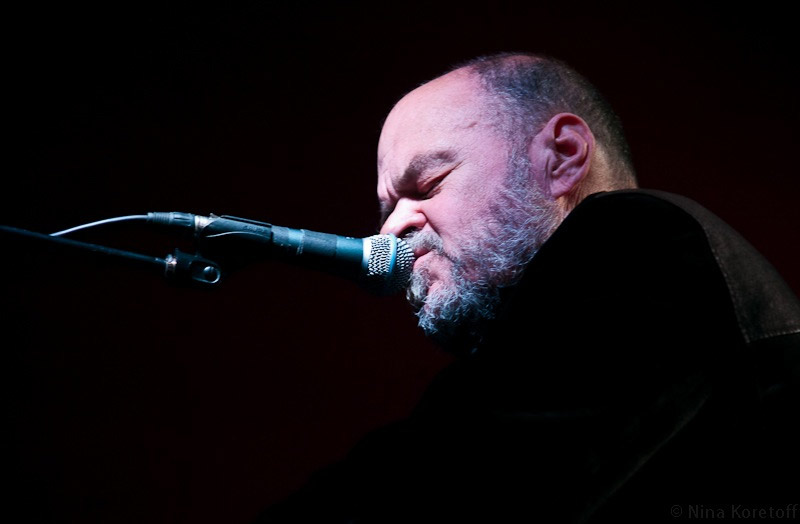 Click here for photos of Pere Ubu at 2011 Primavera Sound in Barcelona, Spain in the QRO Concert Photo Gallery

Rock music is simple enough that much of it, including if not especially the classics, sounds inevitable.  Sometimes it is this inevitability that gives a song its authority.  If the Rolling Stones broke up in 1968, somebody else would have made something like “It’s Only Rock ‘n’ Roll (But I Like It)”, and that’s part of its charm.  However, no one else could or would have made “Gimme Shelter”, and that’s part of what makes it iconic.

Pere Ubu’s music is devoid of inevitabilities.  Much of their catalogue sounds like two very different songs being played at once.  This is best observed in their earliest material.  At its core, much of their debut The Modern Dance is relatable but inventive punk rock.  However, synths, horns, and David Thomas’ voice crawl in to noodle and squawk in the background like some alien broadcast interrupting the music. 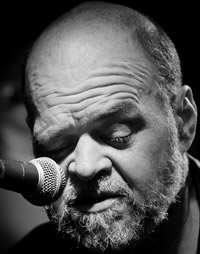 On the most recent Pere Ubu tour, they are supported by opening act Gagarin, a solo project of Thomas’ that is all alien broadcast.  At a show at the small club The Bishop in Bloomington, IN on Sunday, September 22nd, onlookers got to see an aging Thomas sit on a chair and rock back and forth while speaking into a modified rotary phone handset over sparse abstract electronic music.  This occurred in front of a long distorted projection of a man making indecipherable movements.  Around mid-set, a person in a rooster masks slowly slinked through the crowd from the back to deliver Thomas a small glass of something, although he barely touched it the whole evening.  The rooster lingered in front of the stage, acting out some sort of interpretive dance, until it was time to slide back through the crowd.

Given the twists and turns of the Pere Ubu catalogue, this seemed to point towards an unusual set by the main act.  Despite the requisite squawks from electronics and theremin during the main set, the rhythm section came through more than anything else live, resulting in a set that, unlike their studio material, I believe most rock fans would have enjoyed.  It should be emphasized that the playing was faithful to the source material, not diluting it.  It’s just that the band was so tight and rocked so hard that you couldn’t help but be swept up in the energy.  In hindsight, it may be that in order to make rock music this unhinged work, there must be a highly hinged anchor somewhere. 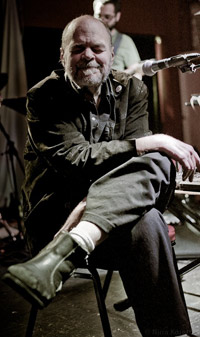 Thomas remained seated throughout the show, but this did nothing to dampen the energy.  In fact, it seemed to draw the crowd in for the stand-up-like spoken interludes between songs.  It was never clear what was an act and what was spontaneous.  At one point, Thomas spoke into the old handset, but did not experience the intended distortion.  He mumbled something about the sound guy turning it on, tried again, and when it still did not work, he threw it down and the band started without his intro.  Was that a skit?  Perhaps even Thomas does not know.  Sometimes, during instrumental passages of songs, Thomas would sit with his head tucked down and his hands folded over the top.  Once, he did this between songs.  Some of the band members looked at each other, shrugged, and started the next song without him.  He seemed so in control of the manner of the show with his stories that anything else that occurred seemed as if it must be choreographed too. 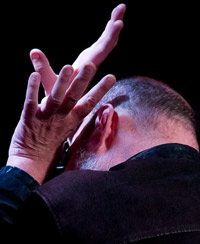 A number of songs from their most recent album Lady From Shanghai were played.  Pere Ubu were always a little dark, but songs such as “414 Seconds” and “Mandy” seemed particularly ominous, making old standards like “The Modern Dance” and “Over My Head” sound almost cheery by comparison.  The crowd was clearly appreciative of it all.  Everyone knew they were privileged to be witnessing one of the great happy accidents in rock music history, somehow still going after generations had elapsed, leaving us with a catalogue that no one else would have made or perhaps even wanted to make.