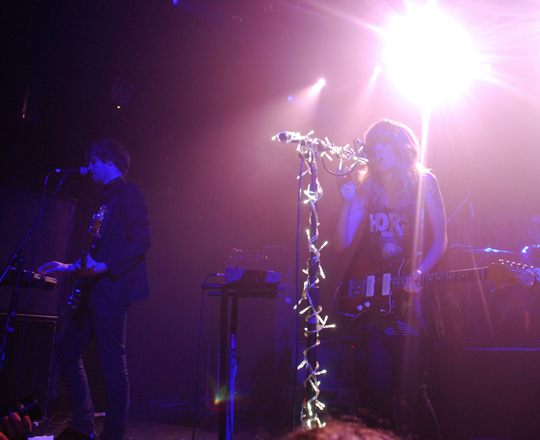 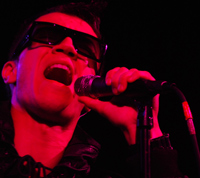 To most New Yorkers, Fashion Week is just something that happens to other people, like natural disasters (seriously – when was the last time a natural disaster happened in NYC? 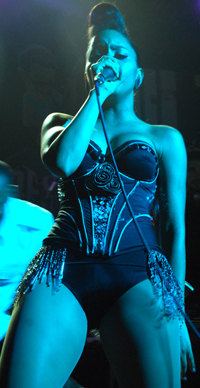 Or an alien abduction?…).  There are some signs up, some sales, and 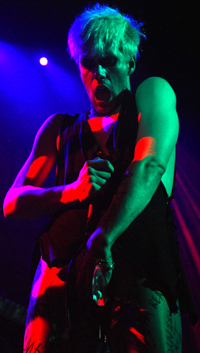 maybe you walk by some event with a line.  And in the indie-hipster world, it can be even more remote, because fashion is one of those superficial things you’re not supposed to care about.  Kind of like celebrity gossip.  Well fashion and celebrity gossip came to New York’s hipsters in the form of the ‘Perez Hilton Presents’ Tour, headlined by Ladyhawke on Wednesday, September 16th at Fillmore New York at Irving Plaza, with Semi-Precious Weapons, Kat DeLuna, Little Boots, and FrankMusik. 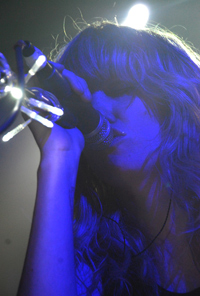 In case you somehow didn’t know, Perez Hilton (born Mario Armando Lavandeira, Jr.) is the famed celebrity gossip-blogger whose site has broken numerous tabloid stories, earning millions of hits – and almost as many detractors.  So his tour, showcasing some of his favorite new bands, would seem tailor-made to be fodder for all the hipster-haters out there – especially falling during Fashion Week, another easy target.  But the show he put together was impressive, and a damn fun time, thanks to the music.

However, it was still not without controversy.  Originally, the tour had been co-headlined between Ladyhawke & Scotland’s Ida Maria (QRO photos), but only a few nights before in Boston, Ms. Maria left the stage during the second song, eventually came back, did one more, half-hearted song, apologized for not being in the best place & unable to do a full set, and then left.  Rumors were flying about what happened, many connected to her allegedly drunk performance earlier in Washington, D.C.  But she was still listed on the bill – right up until the night of the show, creating not only disappointment (though would you want to have seen that Boston show, except to rubber-neck?), but also questions about who was playing & when for the entire line-up, which had been changing even before Maria dropped out. 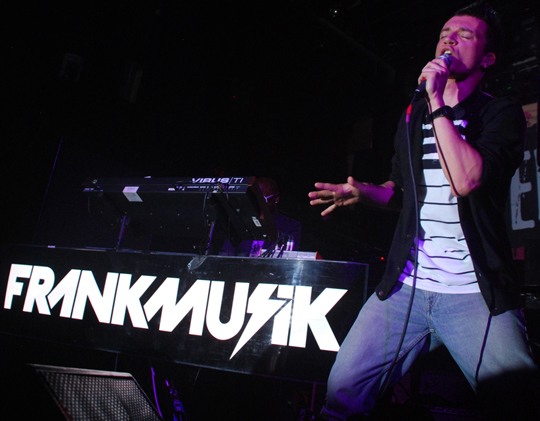 One act that you did know that was going to play was first act FrankMusik, who was not only performing in New York City for the first time, but it was also his actual first visit to New York!  The British singer had a decidedly U.K. dance sound, with U.K. dance-boy emotion.  He was introduced by Hilton, and Hilton spent FrankMusik’s set in the photo pit, two things he would do for every band that night. 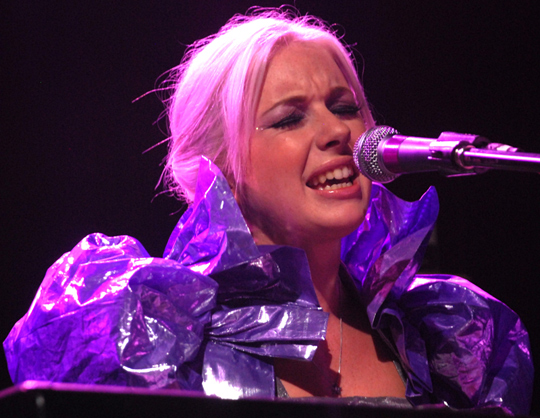 Click here for photos of Little Boots at CMJ 2008 in New York, NY in the QRO Concert Photo Gallery

In line for the show, one guy said he was just showing up to Irving for FrankMusik, and then was going to head downtown to Bowery Ballroom (QRO venue review) for Little Boots – and thus didn’t believe it when he was told that Little Boots would actually be performing after FrankMusik at Irving!  But there she was, up on stage – albeit for only three songs, and performing solo, so she could make her Bowery headlining gig.  That did mean the photographers in the photo pit got to shoot from there for her whole set, which was kind of odd, because how many photos can you take of one woman playing piano, no matter how pretty & well-dressed (and well-lit)?  But Boots (real name Victoria Hesketh) charmed the crowd, armed only with a keyboard & some Tetris-looking screen-thing. 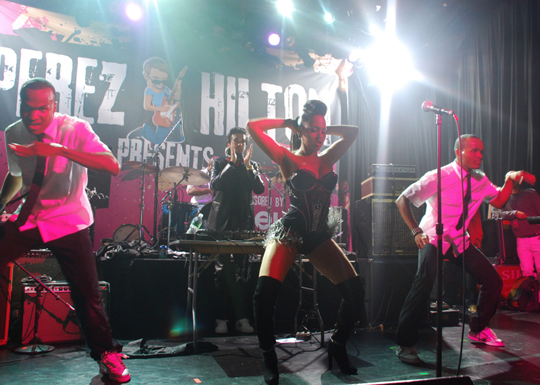 While on line, many were wondering whether there would be a replacement in Ida Maria’s slot, or whether Ladyhawke would just go on earlier.  Turned out neither, sort of, as Semi-Precious Weapons were bumped back to Maria’s slot, and on after Little Boots was Kat DeLuna.  She played another three-song, photo pit-full-the-whole-time set, but everything else was different, as she danced her heart out to well-choreographed moves – with two back-up dancers!  And this was dancing, not "grinding", like DeLuna differentiated, though it was certainly sexy (with DeLuna wearing an evil Wonder Woman-like one piece). 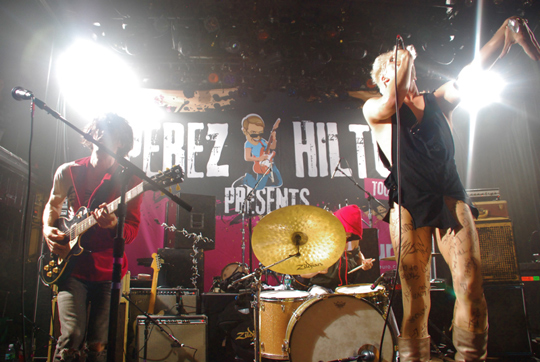 While all three previous solo acts were good, Semi-Precious Weapons blew them all away.  Hilton introduced them by saying they were "bringing glam back", and they certainly were, with lead singer Justin Tranter looking like a modern Ziggy Stardust (in his own one-piece – and leggings…), but rocking all out with supreme 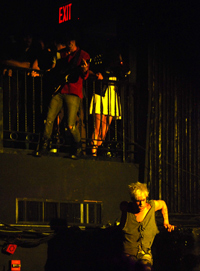 confidence, such as joking (?), "We are now the official co-headliner on this tour!"   He started out with scissor kicks, but soon built up to his request, "I need some inspiration – for my operation.  Show your tits!"  Unfortunately, few, if any ladies did, but one did manage to make her way into the side of the photo pit & yell, "I think you’re hot!" – with which Tranter gave her the mike to repeat the statement.  One actually could feel bad for bassist Cole Whittle & guitarist Stevy Pyne, who were very active themselves, but still overshadowed by Tranter, whether Cole’s blacklight poncho, or Pyne actually following Tranter in climbing onto the high landing to stage-right (while still playing, no mean feat), even hanging off the VIP balcony (okay, not playing then, but still…). 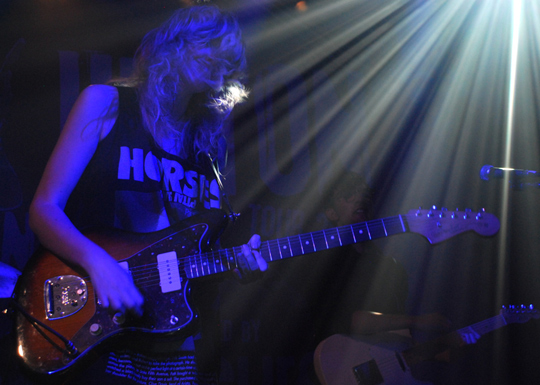 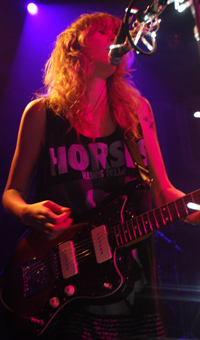 But maybe what Tranter overshadowed most was the band’s actual music, which wasn’t nearly as memorable.  In fact, the whole night threatened to be more about looks than sound, until Ladyhawke took the stage.  The New Zealand-born Phillipa ‘Pip’ Brown, a.k.a. Ladyhawke, made an impressive debut in the States with the deluxe release of her self-titled record (QRO review), nicely mixing rock, dance & electro, and her live show lived up to it.  Not only did she perform excellent songs off of the regular copy like single "Paris Is Burning" (naturally, of course – where do you think Perez got the ‘Hilton’?… ) and the darker "Another Runaway", but also "Paris" b-side "Danny and Jenny", which is on the deluxe copy (and should have been on the original). 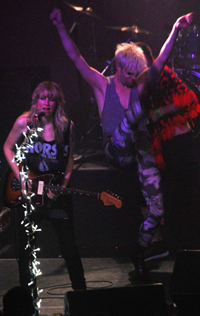 If only more of the crowd had been there to watch her.  A number of people left Irving after Semi-Precious Weapons’ set, probably because they were too-cool-for-school folks on the guest list – and there were a lot of people on the guest list.  The line of people outside referenced above was for people on the guest list, and wrapped around the corner (though some of that probably was because Irving’s box office was slow from so many different guest lists, not to mention just being a poorly-run box office…).  The whole upstairs balcony of Irving Plaza (QRO venue review) was roped off for guests, both sides, with extra hired

security (including one guy who’d been fired the night before from Lady Gaga’s detail…).  When introducing Kat DeLuna (with Gabe Saporta of Cobra Starship), Hilton chastised absent actress Leighton Meester (Blair Waldorf of Gossip Girl) for skipping the event – unfortunately, too many ‘guests of Perez’ were similarly too important to stay for the whole show.

And anyone who left even a little early missed the night’s great crescendo, when Semi-Precious Weapons came on stage to dance & join Ladyhawke for final number "My Delirium" – as did two women who climbed onto the stage-right landing, and dropped their dresses (though security made them put their clothes back on…): 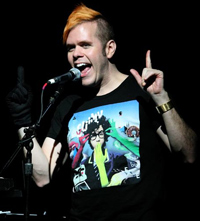 Gossip & fashion do cross the hipster world, and not just in hating or irony, but through danceable, electric sounds.  And while you may hate Perez Hilton, and you may hate fashion, at Irving he was wearing the t-shirt that comes with the excellent new Paint Your Face record (QRO review) by French import Sliimy – like his tour, you can’t deny good music.