PB&J finally return with 'Breakin’ Point', which at its best manages to take the sweet sound of the Beatles and bring it to the twenty-first century dance club.... 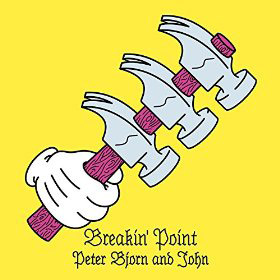 Peter Bjorn and John were at the leading edge of the ‘Swedish Invasion’ a decade ago (QRO’s ‘Swedish Sensations’) with Writer’s Block and its hit single “Young Folks”, whose rotating female vocalist spot was as strong a launching pad for Swedish ladies as singing with Broken Social Scene was for Canadian gals. There have been ups & downs since then, such as the anti-mainstream Seaside Rock and weak indietronica Living Thing (QRO review), but also the reminder-why-you-love-them Gimme Some (QRO review). Five years from Gimme, PB&J finally return with Breakin’ Point, which at its best manages to take the sweet sound of the Beatles and bring it to the twenty-first century dance club.

Contemporizing the Fab Four rather than retreading, pieces like “Do-Si-Do” takes that signature cheer, but give it a real dance edge. “In This Town” is almost a love letter to an English town, while “Hard Sleep” and “What You Talking About?” have a more critical edge. Then there’s just the great, catchy brightness of the closer, “Pretty Dumb, Pretty Lame”.

Referencing the Beatles in a music review is often pretty lame, as they’ve influenced everybody, but the Thrilling Three from Stockholm even explicitly name-check “Eleanor Rigby” in “Do-Si-Do” (not that the song is the haunting “Rigby” side of the Beatles). Like prior work, their pop antics have hits and misses, but hit really nicely when they do.