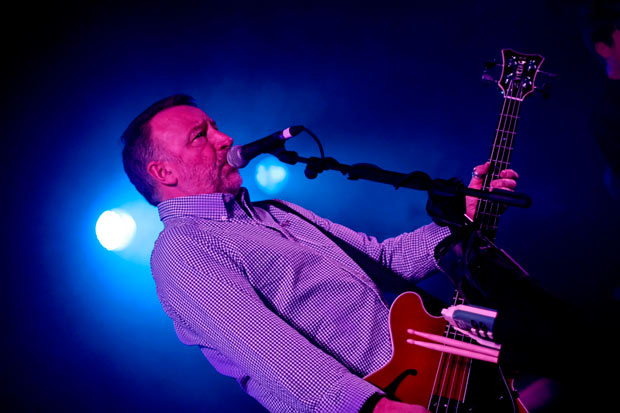 Click here for photos of Peter Hook & The Light at 2013 Crooked Ways Festival in Pontefract, U.K. in the QRO Concert Photo Gallery

From the outside Manchester Cathedral is not an inspiring building, just a rather modest Victorian dark stone church.  If it’s spiritual uplift that you need then the new glass wedge of the National Football Museum is a much better bet.  Step inside the Cathedral on gig night however and it’s a different matter.  With the stage rigged in the nave, the ornately carved rood screen forming the backdrop and the high vaulted mediaeval interior filled with smoke and coloured light it is hard to think of a better place for a Manchester icon to make a triumphant return to his home town. 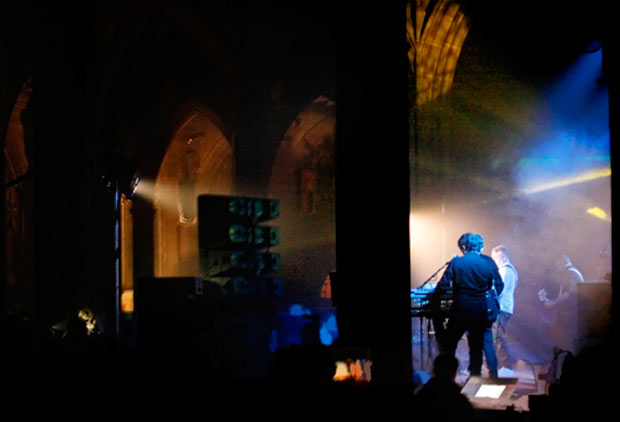 Click here for photos of Peter Hook & The Light, with Rowetta, at Manchester Cathedral for ‘Music For Cities’ on November 15th, 2012 in the QRO Concert Photo Gallery

Manchester loves music nearly as much as it loves football, and in particular the sound of the bands whose success made Manchester the premier music city in Britain for two decades from the Post Punk of the eighties through to the Madchester scene of the nineties.  It is also a city that loves it own so there was a special buzz of anticipation when Peter Hook & The Light visited on Friday, January 28th with their reimagination of the first two New Order albums, the serious Joy Division-esque Movement and the breakthrough electronic dance inspired Power, Corruption & Lies.

The phenomenon of the album concert is a relatively recent one, and although The Who, Cheap Trick and others may have pioneered the genre back in the 1970s, it’s still controversial.  According to Chris Richards of the Washington Post it’s “a cruel perversion of a concert’s real time magic,” and even if this is harsh it is true that for many bands, tour income is now more important than music sales, and as the ‘album as commodity’ falls into terminal decline the ‘album as playlist’ comes into its own.  Many will have been wondering as we waited for the show whether Hook & co. could turn this gig into something more than a nostalgia trip, but they need not have worried. 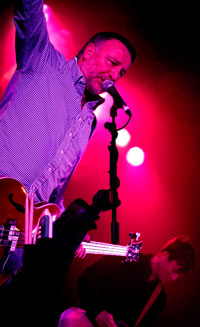 It seemed particularly poignant to be celebrating the importance of the album as a cultural artifact in the week in which HMV, the U.K.’s only remaining high street music retailer, went into administration.  Some predict the birth of a new generation of small specialist music shops retailers and a resurgence of the album – but most commentators see a future where music is consumed mostly as discrete tracks purchased by download.  The album is dead.

Post-punk artists and their contemporaries may well be the last generation of musicians who can fairly be called album acts – and for New Order especially, the distinction between singles and album tracks was critical, since they took the attitude that albums should stand on their own merits, without singles to bolster sales (remember the ‘This Album Does Not Contain “Blue Monday”’ stickers?).

Tensions between Hook and his former band mates are still running high and following a lacklustre tour in 2011-12 from Sumner, Morris and Gilbert, still trading under the New Order brand name (QRO photos from that tour), this was a chance for Hook to stake a claim to the ownership of the early part of his back catalogue.  Following an excellent opening set of from Modern Blonde (QRO photos), Hook & The Light took to the stage with an unfussy and businesslike demeanour that they maintained throughout the show.  This was a show about musical excellence and there was no need for showboating.  Hook (or ‘Hooky’ as one felt by the end that one ought to call him just so as not to feel like an outsider), sporting a check shirt and jeans and still wearing his bass slung at just above knee-level, acknowledged the roar of the crowd with a wave but he wasn’t feeling conversational.  He had the look of a man who had a serious job to do and would not welcome interruptions. 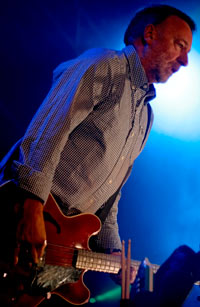 Opening with the singles “In A Lonely Place”, “Ceremony” and “Procession”, the band then progressed through the whole of Movement.  These songs, written before and shortly after Ian Curtis’s death, have a seriousness that Hook’s deep voice conveyed well, but the highlights were the moments when he stepped away from the microphone and concentrated on the music.  At these times the band showed just how very good they are, and although Hook can look slightly uncomfortable at the microphone, when they really let rip he appeared to be in his element.  During the gig he switched between four- and six-string basses, but also played melodica and a set of electric snares that he struck as if they had done him some injury that he wished to repay.  The resulting sound was very different from the original album cuts – fuller and more melodic – an exciting combination of old and new elements and Movement sounded a lot less glum than it did back in 1981.

The second half of the show was given over to Power, Corruption and Lies – an altogether more up tempo and cheerful proposition, but also likely to be more controversial – the songs on this album mean something special to a lot of people.  Once again the band showed that they were more than up to the task of equaling or even outdoing the original versions.  This was no nostalgic trip down memory lane and the real time magic of the concert was in no danger here.  There was plenty of dancing, particularly to “586”, and of course the encore of “Hurt”, “Temptation” and a final, resounding “Blue Monday” had the whole place singing along.  A new album from Hook is rumoured and on this showing there is every chance of them being very good indeed.  It would be nice if we could still walk into town and buy one. 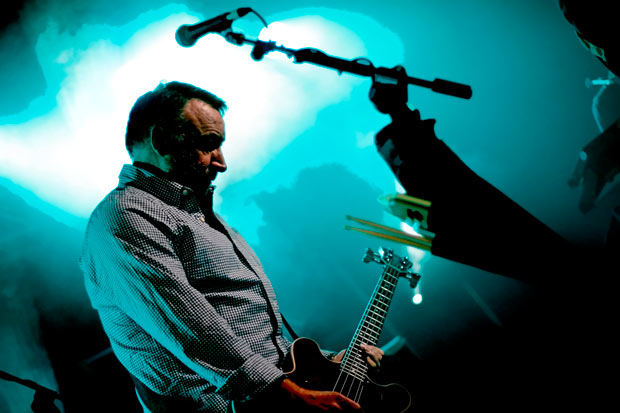