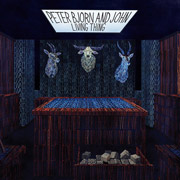 Back in 2006, Peter Bjorn and John were at the leading edge of the ‘Swedish Invasion’ (QRO’s Swedish Sensations) thanks to Writer’s Block and especially its hit single “Young Folks”, featuring then-of-The Concretes (QRO album review) Victoria Bergsman, sweeping the States and even appearing on Saturday Night Live.  Their simple-but-catchy sound drew from the sixties shine, but with modern beats.  Living Thing, however, introduces an indietronic element that takes away much of that natural feel, the new sound missing more than it hits.

But first those hits, and Living has two strong ones in singles “Nothing To Worry About” and “Lay It Down”.  Both add a group-sing chorus to their catchy rhythms, which somehow sees “Nothing” exceed and even deliver on its ProTools-y slyness (like U2 failed to do on their most recent single, “Get On Your Boots” – QRO album review), and “Lay” likewise on its pseudo-tough guy act.  In between, the record’s title track has an interesting group chorus and stripped, African-style drumming (akin to Paul Simon’s iconic Graceland) – just as Bergsman’s voice really livened up “Young Folks”, so too do the group choruses spark when added.

If only Living Thing had used them more often.  Sometimes, this indietronic PB&J comes over well, like early on with “Just the Past” or later with “Blue Period Picasso”, but both of those are proceeded by just-okay tracks, “It Don’t Move Me” and “Stay This Way”, respectively, which make this reinvention of sound feel unnecessary.  Record opener “The Feeling” is semi-tronic, semi-catchy, but also semi-annoying, and the trio’s stabs at high haunt on “I’m Losing My Mind”, Euro-high “I Want You”, and electro-choral finisher “Last Night” just come off as relatively boring.

In some ways, this development had been foretold, and not just the Peter Bjorn and John’s more electric nature on last year’s digital/vinyl-only release, Seaside Rock.  “Young Folks” was certainly a bigger hit than Writer’s Block – so big that it led guest star Bergsman to abandon her Concretes for a solo career as Taken By Trees, and her debut LP, produced by PB&J’s Björn Yttling, Open Field, was weak (QRO review).  At least PB&J are trying to become a better, more interesting sandwich, and still have a few hits in them.