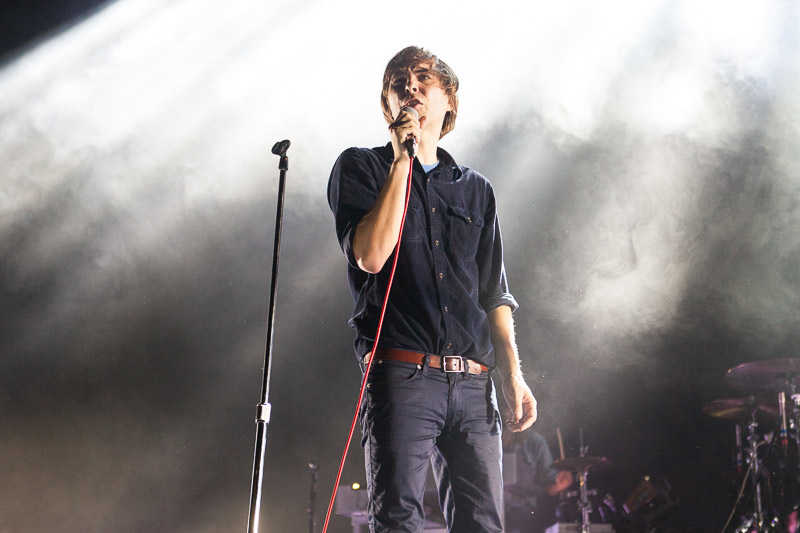 Click here for all of QRO’s coverage of Phoenix in ‘Spotlight On : Phoenix’ feature

What do you do when you’re ‘that big’?  Phoenix might be the biggest thing out of Versailles since Louis XIV (or, at least, Daft Punk – QRO album review), loved by virtually everyone that’s ever heard their music.  They’ve played Saturday Night Live multiple times, topped the bill at Madison Square Garden – they’ve even headlined Coachella!  So it was go big or go home when they came to Brooklyn’s new & massive Barclays Center on Wednesday, October 2nd, and they went big.

But even bigger was Barclays Center.  The new home of the (now) Brooklyn Nets (and soon-to-be-new home of the New York Islanders) is an enormous space, comparable to MSG (QRO venue review), though more modern, more pitched seating, and more references to (now ex-owner) Jay-Z.  And the banners at the top still say ‘New Jersey Nets’, from their post-season run at the start of this century/millennium.  Phoenix’s stage was all the way to one side, with a standing room General Admission in the center area and multiple rows of seating.  During opener The Vaccines (QRO photos), the whole place looked quite empty, and there was a whiff of desperation coming from the multiple ticket giveaways for the concert (such as from the new Will Call app).  Yet Barclays was filled across GA & the seats by the time Phoenix took the stage.

While they opened with “Entertainment” from this year’s Bankrupt! (QRO review), this was not the Bankrupt! tour – that had come earlier this year, closer on the heels of the album’s release, when Phoenix played the (relatively) more intimate Apollo Theatre (QRO venue review).  This set mixed and matched from literally all of the band’s discography, and that included a more-than-healthy dose of Wolfgang Amadeus Phoenix (QRO review), starting right after “Entertainment” in “Lasso” and “Lisztomania”.  Wolfgang is the record that launched the band into beloved superstardom (and was QRO’s #1 Record of 2009), so you know that the crowd wanted it, and got it in spades.

Yet what was perhaps more interesting was how many old, pre-Wolfgang, pre-stardom songs Phoenix played.  “Long Distance Call”, from 2006’s It’s Never Been Like That, after “Lisztomania” wasn’t a surprise, as it’s long been a live staple (its wonderful chorus gave that record its title), but who was expecting “Rally” or “Consolation Prizes”?  What about “Run Run Run” from prior album Alphabetical, or the combo of “If I Ever Feel Better” & “Funky Squaredance” from debut United to go into the encore break?  Even singer Thomas Mars told the crowd, “This is one of the first songs we ever wrote!”

While a couple of the older songs didn’t immediately grab the crowd (like, ironically, “Rally”), there was a clap-along to “Run”, and both guitarists Laurent Brancowitz and Christian Mazzalai (QRO interview) went into the photo pit to close “Consolation”.  Of course, Mars one-upped them on Wolfgang’s following “Armistice” by going into the pit and staying there.  Following the joyous sing-along to Wolfgang’s joyous “1901”, Mars & Mazzalai brought things down by getting intimate and quiet for “Countdown”.

But the night got way more intimate – at least if you were relatively close.  For “Better” & “Squaredance”, Mars suddenly appeared at the other end of the GA stage floor – it was impressive how he made it there before you realized that he was gone from the stage.  Even more impressively, for the encore return & the evening’s ender “Rome”, Mars meandered his way through the house-right seats, going through rows, singing & hugging fans.  He made it all the way to the back side of the GA section, entering there and tried to make his way back to the stage on foot – less than halfway through, he just gave up and went for the crowd-surf back to the stage!  Maybe the deepest anyone’s gone into the crowd at a show, you still were probably envious if stuck in the nosebleeds (or just on the other side of Barclays) – but, in that case, you did get to see the epic journey Mars’ mike chord made, across and over the house-right seats, then slowly shrinking back to the stage as Mars was crowd-surfed back.

Oh, and then Mars invited the crowd ON stage to close out the night (even asking security to help stage-climbers…)!

Not all of the ‘big time’ moves paid off as well as that – the confetti of fake one-hundred dollar bills that shot out at the end of Wolfgang instrumental “Love Is Like a Sunset” couldn’t fill the large space or ‘make it rain’, but was an honest effort.  And nothing at Barclays could match the intimacy of their Apollo show (QRO review), where Mars almost climbed into the balcony.  But the larger space did also allow the band to have a larger set list, get in all those oldies without missing your favorites from Wolfgang & Bankrupt!. 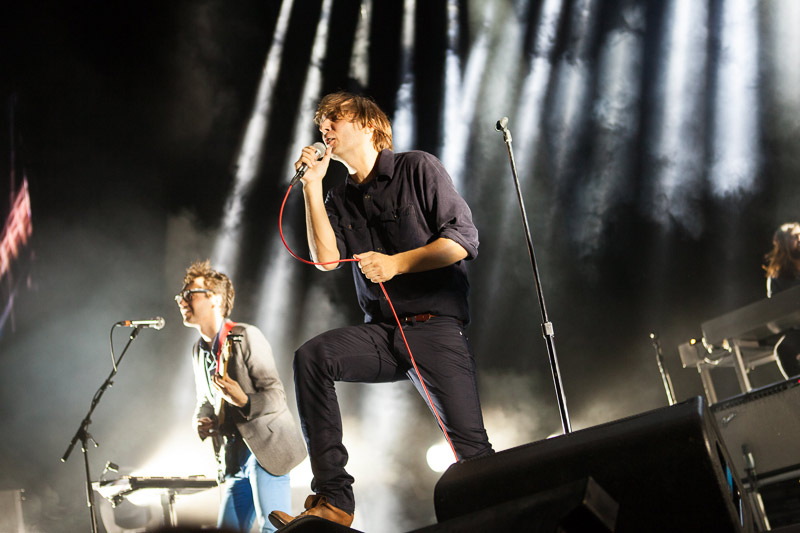 Neko Case – The Worse Things Get…