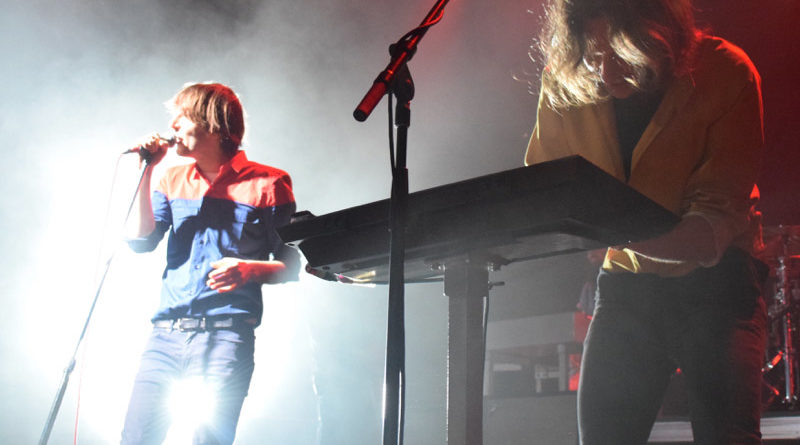 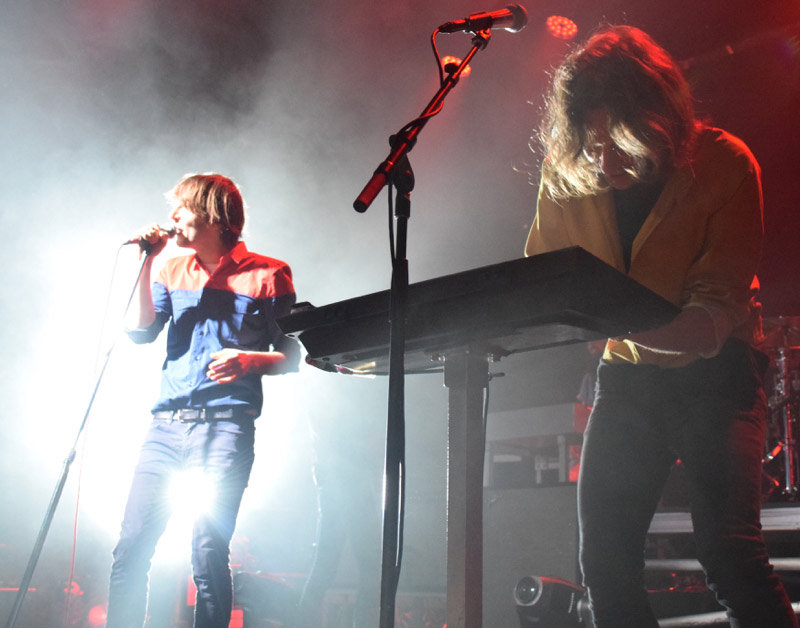 Click here for all of QRO’s coverage of Phoenix in QRO’s ‘Spotlight On : Phoenix’

For a number of years, Versailles’ Phoenix has been a band that everyone can love, indie-pop with an incredibly strong backbeat and absolute infectiousness. Killer records like It’s Never Been Like That, Wolfgang Amadeus Phoenix (QRO review), and Bankrupt! (QRO review) made them the band to recommend to your friend who’s looking for new music. If last year’s Ti Amo (QRO review) wasn’t quite as amazing, it was still very enjoyable. And it was taken up more than a few notches when the band came to Brooklyn Steel on Friday, July 6th.

The second night of a five-night residency there (including the prior Thursday & subsequent Saturday, Monday, and Tuesday), Phoenix were doing right the ‘big band playing intimate-for-them place’ (they’ve previously headlined Brooklyn’s much bigger Barclays Center – QRO live review). Brooklyn Steel (QRO venue review) was done up in Phoenix’s take on Italy that they displayed on Ti Amo, a sort of eighties version including gelato stand (there were kids getting some, because Phoenix are even the band that parents can bring their kids too – there were also two kids rocking out in the side super-VIP), perfume ads, a vending machine with Ti Amo cassettes, an old Telefono phone booth, and more. 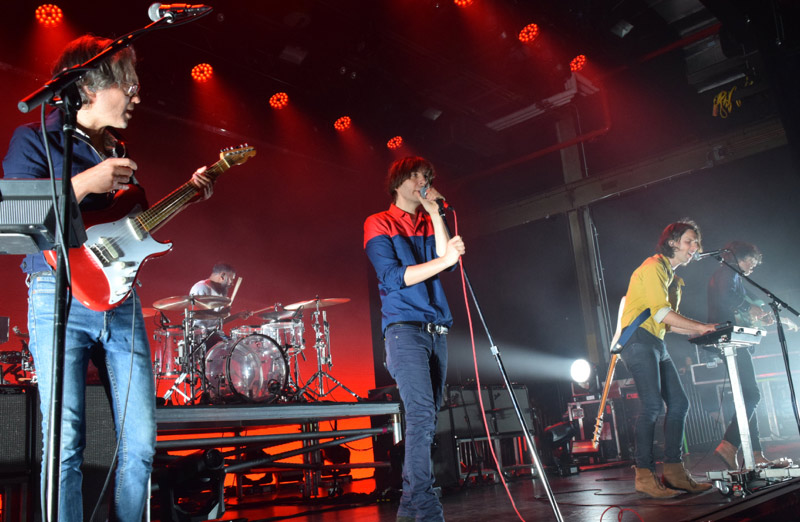 Phoenix came out to Ti Amo’s single “J-Boy”, but one could tell that the crowd enjoyed the older songs more – but that’s understandable, with pieces like the following “Lasso” and “Lisztomania”, from Wolfgang (QRO’s 2009 Album of the Year). Phoenix’s best are so sing-a-long-able, getting the crowd cheering & singing from the first notes. Special mention must be made of “Long Distance Call”, the one song played only that night (the set lists for the rest of the run have been the same, save for that slot) – the Friday night crowd won the run-of-shows lottery by being able to sing, “It’s never been like that! / It’s never been like that! / It’s never been like that!” (given it being the basic title track from It’s Never Been Like That, and the Telefono booth at Brooklyn Steel, it really should have been played every night). It wasn’t the only old song, as also that night was “Rally” from Like That, and from 2000 debut United, “Too Young” and into encore break “It I Ever Feel Better” (“One of the first songs we ever wrote”). 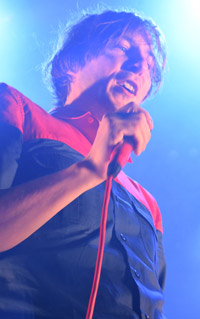 From Ti Amo, there was also their upcoming single “Lovelife”, which for this night the band invited opener Giorgio on stage to sing (yes, he’s an Italian who otherwise sings in his native language), followed by “Ti Amo” itself, a real club-thumper live. Throughout the evening, Phoenix had an impressive light show (one can install more when you’re there for five nights). The backdrop had specially chosen imagery, from hypnotic concentric circles to images of halls and lots of pictures of picturesque Italy – including the Coliseum, because you can’t have Italian images without the Coliseum. The VIP balcony had a specially installed spotlight person; early on, the spotlight hit the likes of guitarists Laurent Brancowitz and Christian Mazzalai (QRO interview), and particularly drummer Thomas Hedlund. Technically Phoenix’s ‘touring drummer,’ he’s really a powerhouse live, providing the impetus behind the music, giving real energy and rock to their pop. 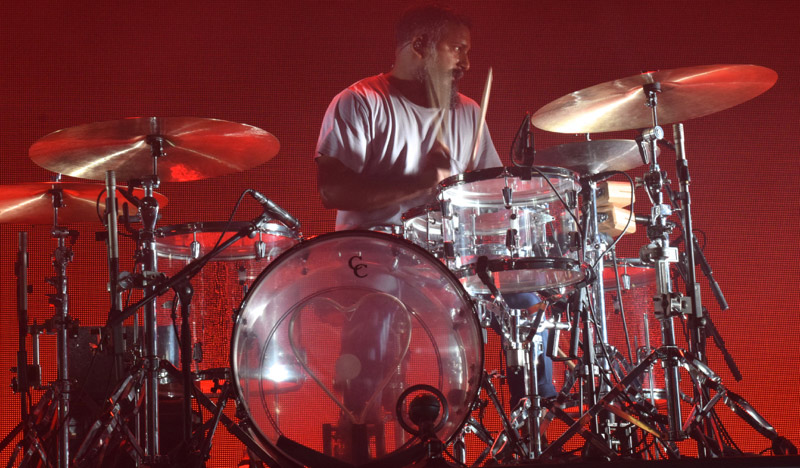 But of course singer Thomas Mars mainly used the spotlight. He’s always been an incredibly exuberant presence onstage & off, and is known for going out into the crowd (like deep into the deep Barclays), but he still managed to up his game at Brooklyn Steel. For most of the twenty-plus minute encore, Mars was somewhere in the crowd, entering during the encore return “Countdown”, to reach the “Telefono” booth for that song. But instead of just heading back after that, he went even deeper into the crowd for “Fior Di Latte”, his mike chord trailing behind him (ironically, early in the evening it had barely been long enough for him to go to the side of the stage). When he trailed back, fans basically demanded he crowd-surf, lifting him up mid-crowd – and then holding him up for while waiting for the next song, Wolfgang classic “1901”. Someone even passed him an open beer (a Modelo, because Brooklyn Steel doesn’t sell Peroni…), which he drank from. 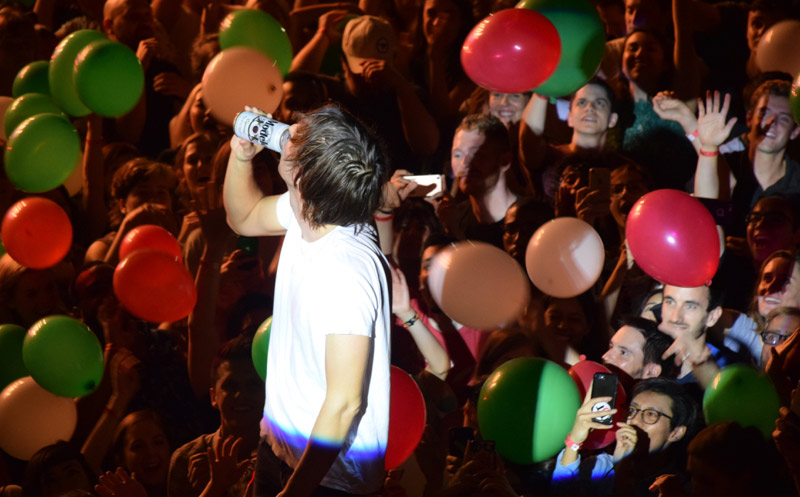 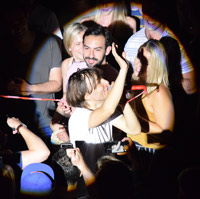 The evening ended with a new version of “Ti Amo”, “Ti Amo Di Piu”. Oh, and there were also two big drops of balloons in the colors of the Italian flag, because of course there were (it was fun, well into the main set, noticing them positioned on the ceiling, anticipating what was coming in the encore). 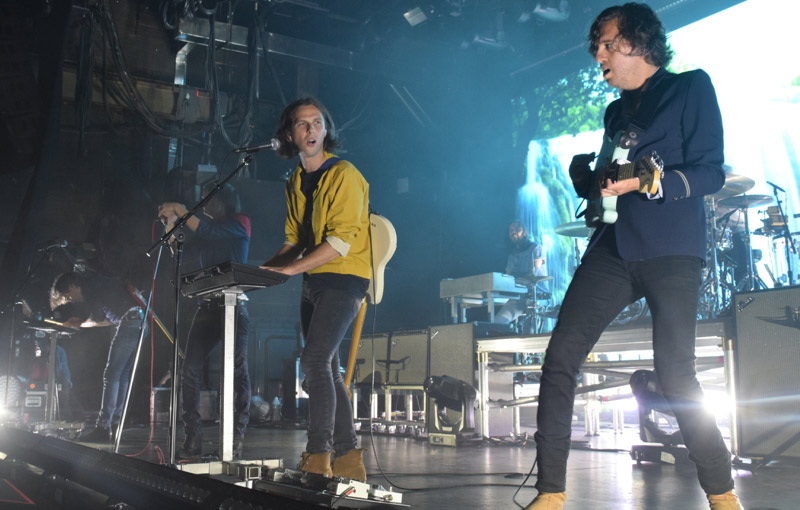