There was a lovely period in the aughts when alt-pop blossomed, and no one blossomed more than Phoenix.... 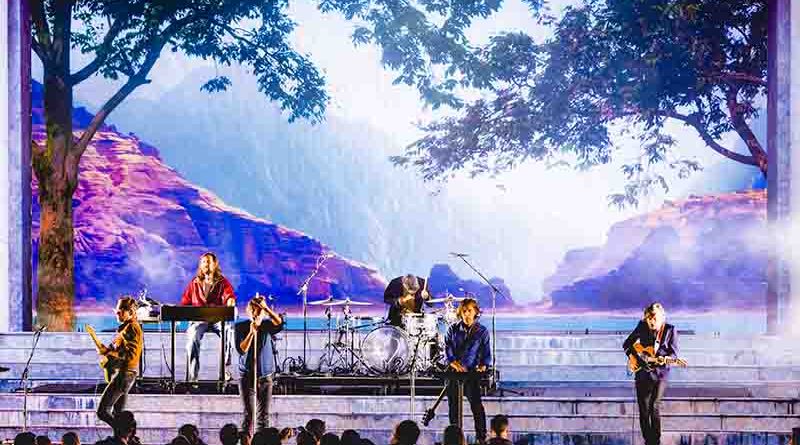 Click here for all of QRO’s coverage of Phoenix in QRO’s ‘Spotlight On : Phoenix’ feature

There was a lovely period in the aughts when alt-pop blossomed, and no one blossomed more than Phoenix. The boys from Versailles had one of the touchstones of the decade in Wolfgang Amadeus Phoenix (QRO review), an album that is Gen Y’s Sgt. Pepper’s. Thankfully, the band didn’t fade away or turn out to be problematic (Gen Y is currently reconsidering Funeral’s place in the pantheon…), but haven’t been a constant presence, usually disappearing after an album cycle ends, only to return a while later to gear up for their next new record. Unfortunately, it’s been five years since their last full-length, Ti Amo (QRO review), undoubtedly lengthened by the pandemic. Fortunately, they are finally coming back, with Alpha Zulu coming out November 4th. And they brought everything from Alpha to Zulu & more to the beautiful Radio City Music Hall on Friday, September 9th.

Indeed, the iconic Radio City (QRO venue review) was the perfect place for the elegant Phoenix to rise again. Singer Thomas Mars called it, “The best-looking place we’ve ever played” – and a band from the home of the Sun King knows classy beauty. The group took full advantage, with an impressive projected backdrop light show, not just lighting up the band (always important, and often overlooked to make sure that a big crowd can see the act they’re paying to watch), but with specific backdrops for specific songs. Perhaps most notable was for the Wolfgang instrumental pair “Love Like a Sunset Part I” and “II”. Usually not the most fascinating live (like most instrumentals), at Radio City they were accompanied by a projection of the famed 1977 film Powers of Ten, where the view of a couple in a park slowly expands outwards by powers of ten, into space and eventually the universe – only to then rapidly shrink back to the original image and then much further in, to the level of quarks. The shrinking began just as “I” turned to “II”, for full synchronicity.

While the evening was about showcasing new Alpha Zulu songs, Phoenix did not skimp on the hits. Indeed, they opened with Wolfgang’s “Lisztomania” and that iconic opening guitar jangle (to the laments of those still trying to buy drinks in the lobby). It was followed by an exclamatory “Entertainment” off of 2013’s Bankrupt! (QRO review), then Mars roping in the crowd with Wolfgang’s “Lasso”. There were more recent, post-Wolfgang songs that were lifted, such as “Entertainment”, “Ti Amo”, or Bankrupt!’s “Trying to be Cool” into the encore break. There were even pieces from 2000 debut United, like big rock with “Funky Squaredance”. And of course, there was the iconic “Long Distance Call”, with its iconic repeated refrain that gave name to its 2005 album, It’s Never Been Like That.

But the band still brought some new material to Radio City, mostly pieces that had recently been released as singles. While Alpha Zulu’s title track somewhat got away from the ‘classic’ Phoenix sound in electronic funk, “Tonight” did the electro-funk better in a lighter tone. “Winter Solstice” made its live debut, a sweeter and softer piece. And “Identical” was brighter Phoenix love.

Like their songs & light show, the band themselves were in fine form. Mars has always been an exuberant frontman, known for his antics & going into the crowd, and this night was no different. As the curtain literally fell heading into the encore break after he got the crowd to show their hands for Wolfgang’s “Rome”, Mars waved back to the cheers, descending just below the curtain. Then he came back with guitarist Laurent Brancowitz on piano, or perhaps it was a harpsicord, bringing the full Versailles royal treatment to Ti Amo’s “Telefono” – and of course he got on top of the piano (this is the man married to Marie Antoinette director Sofia Coppola…). Mars pulled out binoculars for “Trying”, not only peering into the crowd, but what he saw was then projected behind him, two overlapping circles of fans. And Mars closed the night by walking up the side walkway from the stage to the balcony, and back again, always with his mike chord trailing behind him (hanging over the orchestra crowd). Pretty good for a guy who just days earlier got beheaded with his wife in Nadja’s vampire nightclub on the season finale of What We Do In the Shadows…

Some bands are love or hate, but then there are acts where you either love them, or just haven’t heard them yet. Acts like Phoenix, who showed at Radio City Music Hall why they’re still such a favorite of so many.

All In Festival Photo Gallery