For Versailles’ Phoenix, it has been one amazing record after another.... 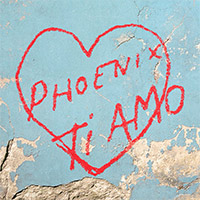 For Versailles’ Phoenix, it has been one amazing record after another. 2006’s It’s Never Been Like That and particularly 2009’s Wolfgang Amadeus Phoenix (QRO review) made them the kind of act that everyone could & should love. While 2013’s Bankrupt! (QRO review) didn’t match Wolfgang, it couldn’t, and still was a very strong release. And even if Ti Amo isn’t yet another amazing album, it’s quite enjoyable.

Sort of the French bands take on their idealized view of Italy and its discotheques, Ti Amo ups the band’s disco elements, though not in an aggressive manner like EDM. Instead, there’s relax on Franco-Italian pieces such as the title track, mid-piece “Goodbye Soleil”, and closer “Telefono”. Throughout the record is some nice Phoenix up-dance, if rarely truly remarkable as they have been in the past.

So yes, Ti Amo doesn’t live up to very high expectations for an amazing band. But it is a good record – and a good excuse for them to tour & for you to see them.