<img src="http://www.qromag.com/wp-content/uploads/2009/06/phoenixlivesmall.jpg" alt="Phoenix : Live in Boston" />Phoenix lit up the Paradise in support of their latest album, <i>Wolfgang Amadeus Phoenix</i>. ... 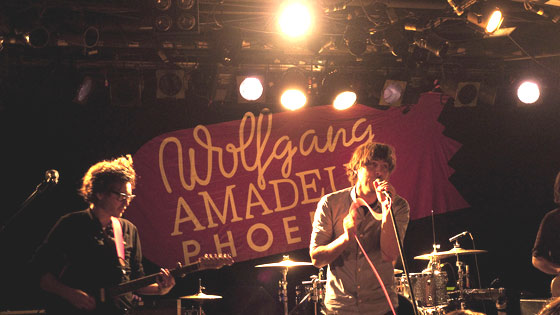 On a Wednesday evening recently, Phoenix rolled through Boston to the Paradise Rock Club where they put on a magnetic performance that featured songs from all of their releases.  For both long- and short-time fans of the band, there was plenty of familiarity to get excited about, and the band didn’t miss a note.

From the moment that they clocked in with the opener from Wolfgang Amadeus Phoenix (QRO review), “Listzomania”, the crowded was fully enraptured.  The band kept the high level of energy going early with a handful of their uptempo numbers.  Continuing with “Long Distance Call” and “Consolation Prizes” from their last album, It’s Never Been Like That, the band whipped crowd into a frenzy with each song bridged by rabid applause.  A few songs later, Phoenix changed the pace up with “Funky Square Dance” from their debut, United, the first of three from that album.

The middle of their set was varied mix of old and new that included new tracks “Girlfriend”, “Armistice”, and the smooth epic “Love Like a Sunset”, during which singer Thomas Mars ever so coolly laid down on stage facing backwards.  Older tracks “Run Run Run” and “Too Young” were as crisp as ever, and the band left the stage after playing “Rome”.  The crowd made a huge amount of noise until they came back and performed two encore songs, “If I Ever Feel Better” and the unstoppable “1901”, which ultimately involved Mars going into the crowd to perform.

For Phoenix fans of any degree, this tour will surely quench all thirsts.  With the band right in their stride, and the setlist full of their best songs -not to mention a healthy dose of their latest effort – they’re not to be missed.