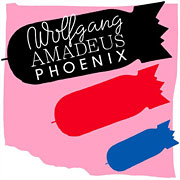 If nothing else, France has delivered a huge array of highly fashionable music acts this decade, and Phoenix is no exception.  With an undeniable charm, the four-piece has coasted through genres on their way their fourth album, Wolfgang Amadeus Phoenix, which has the strongest elements of the previous three.

Mixing slow ambiance with uptempo pop gems throughout Wolfgang Amadeus Phoenix, Phoenix give their audience a full-spectrum experience.  With the opening 1-2 punch of the romping “Lisztomania” and ultra-infectious “1901”, the album quickly establishes its momentum.  As it progresses through the softer, more artistic “Love Like a Sunset” (Parts I and II), the album stretches its legs out and walks with the smoothest of paces.  The latter half of the album is dominated by mellow, mid-tempo tracks like “Big Sun” and “Girlfriend” that effortlessly and shamelessly show off Phoenix’s ability to create a warm, unconditionally inviting pop atmosphere with the catchiest of melodies.

Helping bring together the recent French electro trend together with highly approachable rock, Phoenix make it seem natural, and Wolfgang Amadeus Phoenix has some of their finest songs to date.  Simply put: their catalog just keeps getting better and better.

Paul & The Patients : To The Lions EP