For music fans of a specific age, there was this halcyon period in the nineties when ska was big.... 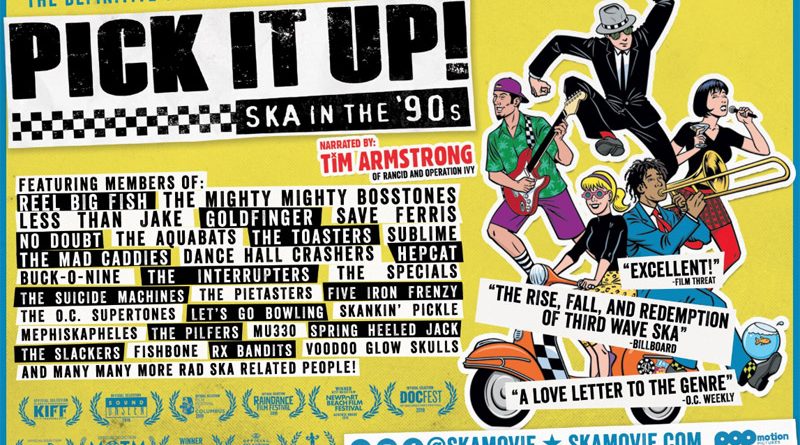 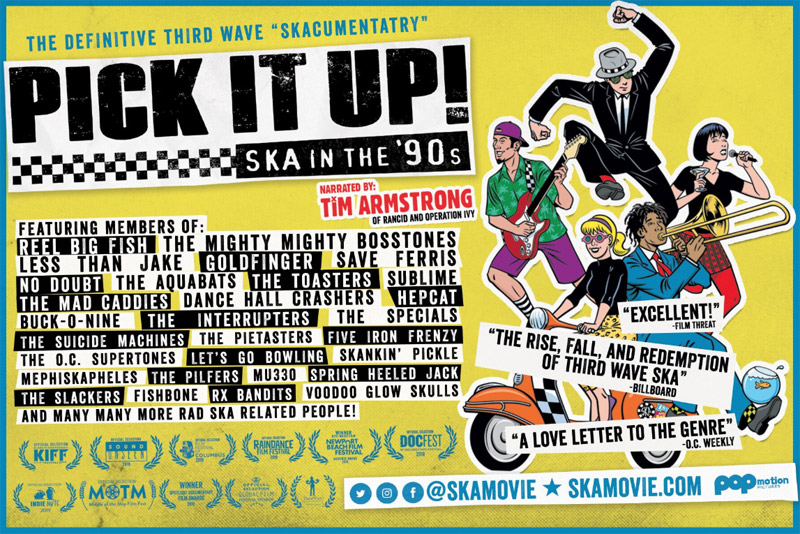 For music fans of a specific age, there was this halcyon period in the nineties when ska was big. No, not grunge, not hip-hop, not emo or hair metal, but ska, the upbeat music so danceable that it had its own style of moving, ‘skanking.’ Just before the turn of the millennium, suddenly bands with like seven or eight members, including horns, wearing checkered suits, upstroke guitars, and “Pick it up” was where to be, all-ages shows with all sorts having a good time. But just as quickly as it found itself on MTV, it disappeared, remaining for many either forgotten or a joke.

Yet for the fans, ska never died, those were some of the best days, and the music still sounds so sweet. And for those fans comes Pick It Up! Ska In the ‘90s DVD documentary (or “skacumentary”…), which brings back all your old favorites to recount what was so great.

Ska’s relatively tight scene of longtime acts means that the Kickstarter documentary could get a massive amount of talking heads to cover everything, and instead of bitterness over what once was, they all seem to be good natured about the good natured sound. Anyone who’s been to a ska show knows that it’s got a cast of colorful characters, something that really livens up the documentary, as opposed to other look backs that are like pulling teeth, not to mention Pick It Up! never relying too much on too few. And the scene was not that long ago, so the old guys don’t look that old, the stories aren’t that far away.

Pick It Up! also covers seemingly everything about ska (though doesn’t explain the ‘putting “ska” in the name’ habit, a small but definite oversight). There’s an animated history going from Jamaica through London to America for the ‘third wave’ (narrated, like the rest of the documentary, by Operation Ivy/Rancid’s Tim Armstrong). Scott Klopfenstein of Reel Big Fish asks people in Times Square today if they’ve even heard of ska (most haven’t). There’s discussion of its unique elements, like skanking and having a horn section, as well as its more serious aspects like racial & gender harmony. Specifics of the time are detailed, in particular what had to be done to get your music out there before the internet (D.I.Y. ‘zines, ska compilations).

Pick It Up! – Ska In The ’90s from PopMotion Pictures on Vimeo.

And countless acts are highlighted, even hit singles and random big moments. The Specials, Fishbone, The Mighty Mighty Bosstones, No Doubt, Sublime and many more come up. Hepcat tells a story of Midwesterners not dancing because they didn’t know how. It turns out that Sublime didn’t actually like their hit “Date Rape” all that much. Tim Burton (QRO interview) of The Bosstones reveals that they were in the oh-so-nineties movie Clueless to pay off tax issues. Costumed heroes The Aquabats lost their drummer Travis Barker to Blink-182 – and then made Yo Gabba Gabba! (QRO live review).

Pick It Up! also doesn’t shirk from the (relative) controversies. The classic ‘that’s not ska’ purist argument. No Doubt going from a local ska band to a hit rock band (but still called ska). Skinheads showing up to shows, looking to fight. Difficult finances. Mainstream attention (such as Carson Daly wearing a two-tone suit for ‘MTV Skaturday’ in 1997) falling on some acts, and not others (such as The Toasters). And, in particular, the boom & bust of the scene, attributed to everything from natural cycles (came in on the swing away from heavy grunge, went out on the swing towards heavy nu-metal, neither of which have aged as well), to major label interference (perhaps the last time in music that one could blame things on major labels), to internet-driven decline in music sales overall (perhaps the first time in music that one could blame things on the internet). And it all ends on the upstroke, capturing ska’s life in the twenty-first century that you might not know about, from The Interrupters to Latino ska.

The twenty-first century has seen seemingly every era’s music come back, whether you want fifties rockabilly or dub-step from five years ago. You can see your favorite act on their latest reunion tour (if they’re still alive – and sometimes even if they’re not…). Ska may not have burned the brightest or the longest, but for those who were there in the nineties, it’s a cherished touchstone that Pick It Up! picks up.