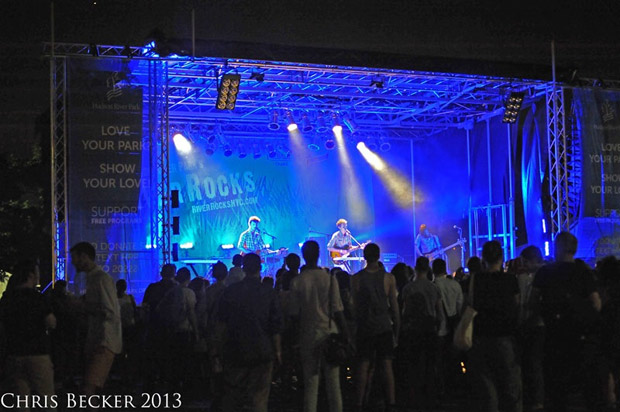 The outdoor summer concert season in June was pretty packed, from the rain- & mud-soaked Governors Ball (QRO recap) at the start of the month to the sunny 4Knots Festival (QRO recap) at the end, with great events at Central Park SummerStage (QRO venue review), Prospect Park Bandshell (QRO venue review), and South Street Seaport (QRO venue review) in the middle.  July & August, however, are looking a lot lighter – the exception being at Hudson River Park’s Pier 84, which kicked off it’s RiverRocks season on Thursday, July 11th with Generationals, Sallie Ford & The Sound Outside, and Waxahatchee.

Unlike at the beginning of June, the beginning of July has been sunny, and that kept up at Pier 84, with perfect weather (even nicer than the too-hot Fourth of July long weekend just prior).  And Pier 84 (QRO venue review) was spruced up – it had already been a major step-up last year when it became the new home of RiverRocks, over the much more run-down Pier 54 (QRO venue review), but now featured a better ‘lay of the land’ after learning in season one, such as plentiful (and clean) port-a-potties closer to the stage.  Admittedly, security was a little tighter than previously, being very careful about people with cameras without photo passes, or people with photo passes trying to go into the backstage area, or even sound guys trying to go to the soundboard without a wristband (“I really need to get there…”  “I really don’t care…” – note: sound guy was given wristband and did get to the soundboard).  Though, in a surprise, one can smoke on Pier 84 – Bloomberg hasn’t clamped down there (yet). 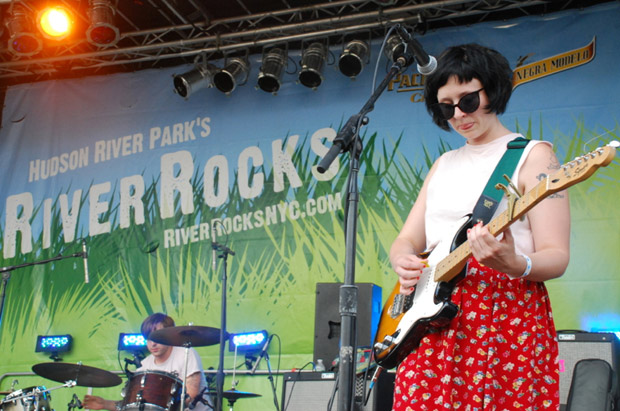 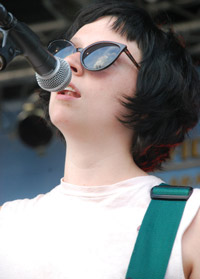 Waxahatchee opened the evening/season.  Just back from touring Europe with Tegan & Sara (QRO spotlight on), the Brooklyn local Katie Hutchfield (from the other side of the other river – Hudson River Park of course looks over at New Jersey), mixed between playing solo, playing soft-but-with-band, and playing loud, and it was the loud that was best, as the solo & soft stuff got lost a bit in the outdoors.  Luckily, that’s most of what’s on her just-released sophomore solo album, Cerulean Salt (QRO review). 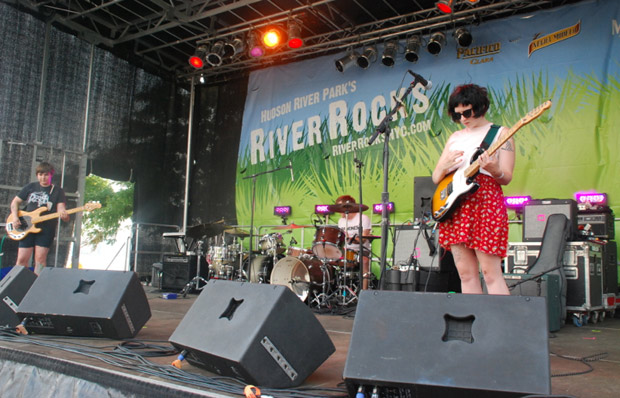 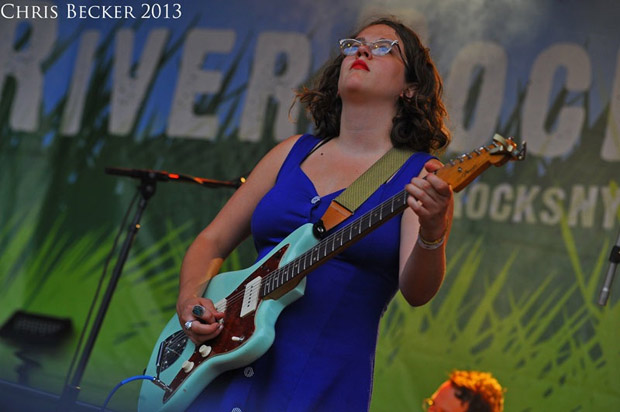 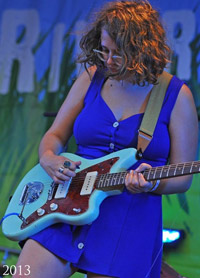 At any show on a non-permanent stage, there’s going to be sound problems, and those hit Sallie Ford & The Sound Outside early.  However, the problems seemed to be more on band’s side, as Ford and her guitarist Jeffrey Munger had to switch guitars after their first song (where Munger at one point used a beer – from sponsor Modelo – as a makeshift slide/capo), so he could restring/tune Ford’s guitar (sitting down right at the front of the stage to do it, in fact).  Ford later joked that she had meant to restring her guitar earlier, but her own jetlag had gotten in the way.  During another tech issue, the guitarist told a lame joke that went over weakly – but was saved by his subsequent remark, “I guess you haven’t been drinking as much as I have…”  And despite the technical issues, Ford & co.’s lady blues rollicked. 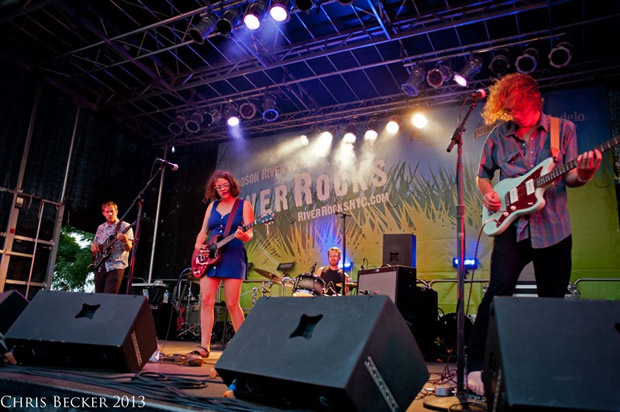 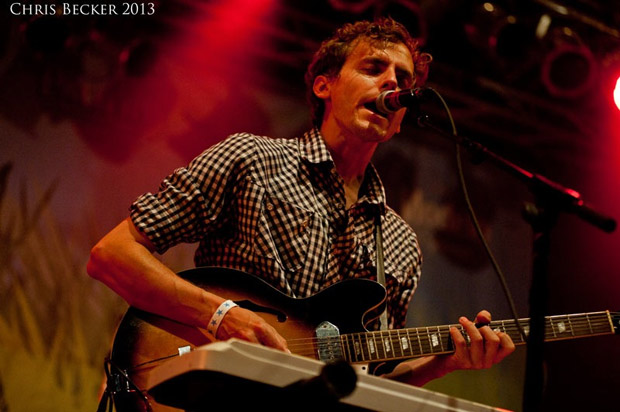 Click here for photos of Generationals at 2011 80/35 Festival in Des Moines, IA in the QRO Concert Photo Gallery

Click here for photos of Generationals at Majestic Theatre in Madison, WI on April 14th, 2011 in the QRO Concert Photo Gallery

Click here for photos of Generationals SXSW 2011 in Austin, TX in the QRO Concert Photo Gallery

Headlining was Generationals, whose recent Heza would lead you to believe they’re another indie-tropical outfit, along the lines of Tanlines & Sinkane (QRO live review together), or Cayucas (QRO photos).  However, live their sound had a lot more indie-pop to go with a tropical upbeat that was neither too highbrow nor too boring (though that was more true with older songs than those from Heza).  They even did a cover of The Cure’s “Friday I’m In Love”, which was, as singer Grant Widmer said, “For tomorrow…”  Widmer also asked the crowd early on, “Ya’ll having a good time?  I’ll be checking in with you periodically…” – and he did. 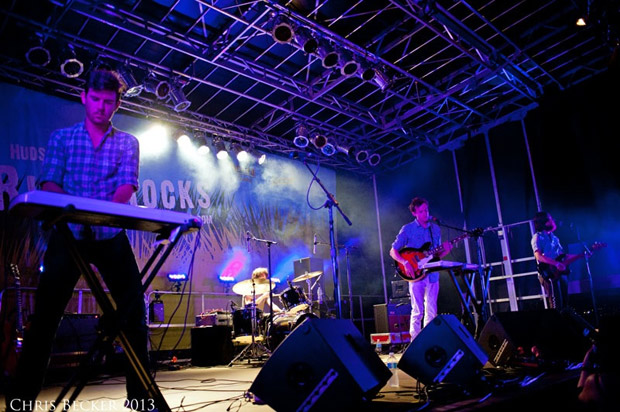 It admittedly wasn’t the biggest crowd in the world (no snaking line to get in like last year at Pier 84 for Grimes – QRO live review), with probably too much competition, chiefly Belle & Sebastian/Yo La Tengo at Prospect Park Bandshell (QRO photos/QRO photos), plus other free events like an Absolut Vodka-sponsored one by Santigold at Roseland Ballroom (QRO venue review) and Toro y Moi (QRO photos) at House of Vans (QRO venue review).  And west of Midtown/Hell’s Kitchen, Pier 84 ain’t in the hipsterest of areas.  But it was a great way to start the second part of the summer. 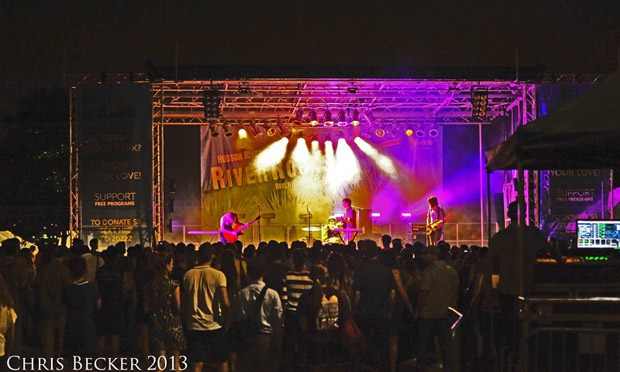