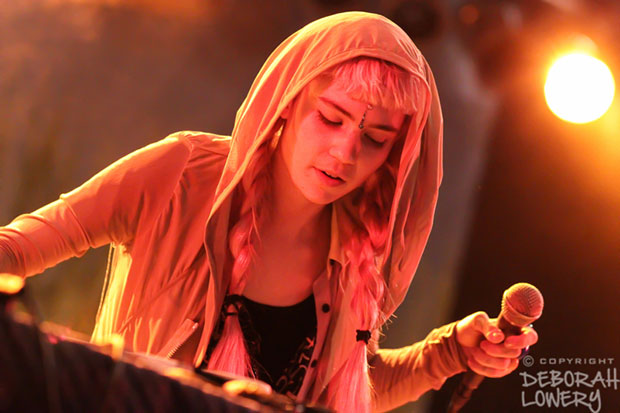 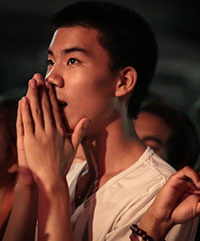 In 2012, Hudson River Park’s RiverRocks concert series moved from the dilapidated Pier 54 (QRO venue review) uptown to the far classier (and more solid) Pier 84 (QRO venue review).  But, despite the better digs, other factors weighed against the festival.  Any move risks confusing people, especially when it’s from one pier to another, with only approximate addresses (at least it was still on the Hudson side of Manhattan…).  The festival left a pier west of 14th Street, which is easily accessible by subway (discounting the walk to the west for anything on the Hudson) for not only Manhattanites but also all the hipsters on the L line, and moved to west of 44th Street, which is easily accessible for out-of-towners, since it’s west of Port Authority Bus Terminal, but not as much for hipsters (and you have to go to Port Authority Bus Terminal…).  The line-up was a bit of an odd one, relying on solo acts like Dan Deacon & Grimes – and then a major storm washed out the Oberhofer show in between those two.  Even the show on Thursday, August 9th was overshadowed by the event taking place the following night one dock over on the overshadowing Intrepid Air, Sea, and Space Museum – The Colbert Report‘s ‘Pepsi Presents StePhest ColbChella ‘012 Rocktaugustfest’ (QRO recap).  But Grimes, and excellent opening performances by Wild Nothing & DIIV, delivered in a huge way. 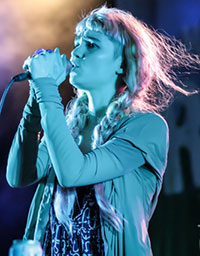 One knew it was going to be a big show just approaching Pier 84, as the line to get in not only went down the length of the pier, but then continued to snake & snake in the outdoor café area nearer the street.  It looked like the hipsters (and they were hipsters…) had just created the line themselves, as it was hard to find any security, but the fans were well behaved (though of course complaining about a line for a free show…).  The lines continued inside the actual ‘venue area’, not only for drinks but also for food and anything else.  It was packed not even close to the stage at the start time of 7:00 PM, and even the benches in VIP already had people standing on them (they’re great to for watching the show if you can get on them, but otherwise you’re blocked – VIP problems…). 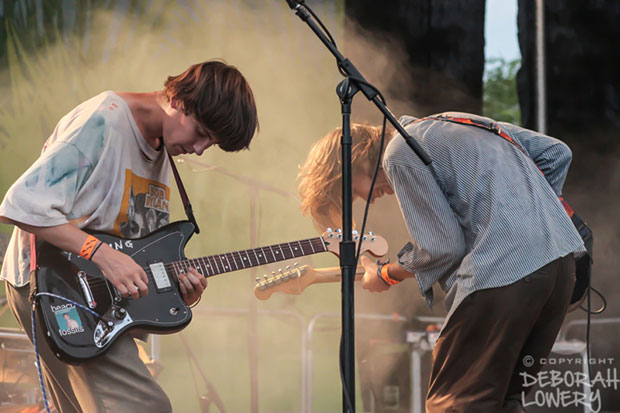 If the line-up hadn’t been so stacked, first opener DIIV could have stolen the show.  While a young band, they don’t feel that way (they have already gone through a name change, dropping ‘Dive’ in favor of ‘DIIV’), as they’re experienced and enjoyable.  What’s more, their energetic atmospherics (light on the vocals) fit perfectly into the evening.  Wild Nothing were not only playing off their yet-to-be-released Nocturne, but were even selling it at Pier 84 before its actual release date (record label won’t be happy about that…).  They had a similarly sweet set, with new drummer Michael Skattum – Nocturne drummer (of Small Black, and Previously of Previously on Lost – QRO interview) Jeff Curtin was actually in attendance, and approved (even if he admitted he was thrown off hearing someone play the beats he’d made…). 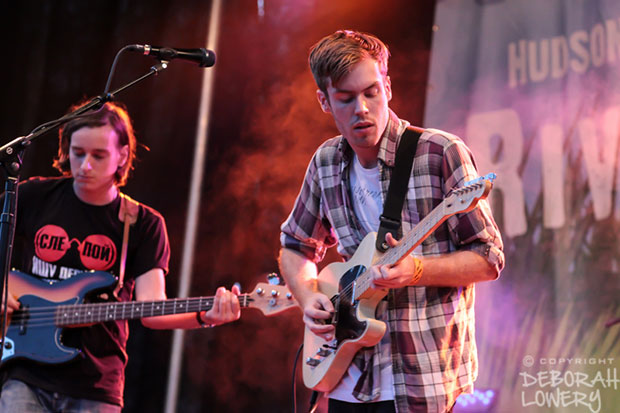 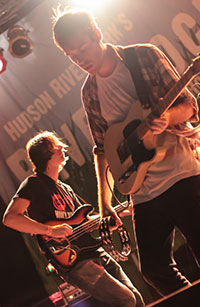 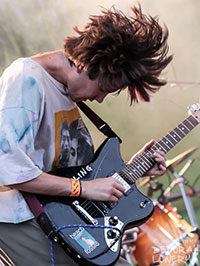 The weather held up surprisingly well.  A few drops did fall during DIIV’s set, and it was cut short, but not from threat of lightning (always a threat that close to/on the water), but because the main mike had shorted out – however, RiverRocks’ Stephen Dima & Troy Moore (also of Seaport Music Festival on South Street Seaport’s Pier 17 – QRO venue review) were on it.  They also handled the big emergency – VIP beer taps ran dry!  It was a bit funny seeing VIPers one-by-one discover this fact, and try to coax more ale from the spent, sputtering taps, not to mention them all trying to look cool as they raced to the taps once they were refilled… (though there was also a lack of plastic cups) 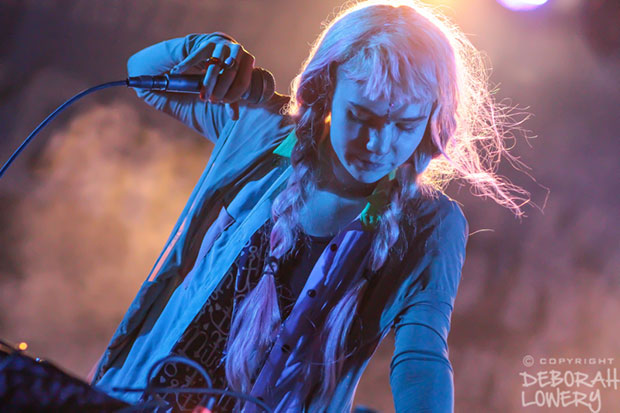 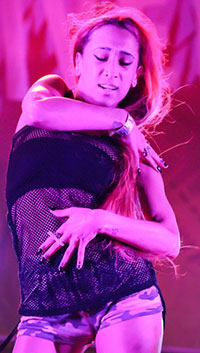 But the main event was a little girl named Grimes (a.k.a. Claire Boucher).  Things have blown up very quickly for the Vancouver native, who’s followed songstresses from the north of Europe like Lykke Li (QRO album review) and Oh 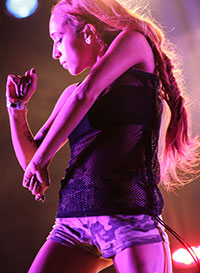 Land (QRO album review) in success behind some very well received indietronica.  It was only last fall that she was some unknown ‘Lykke Li 3.0’ at CMJ (QRO recap) & on tour with Li (QRO photos), but then came Visions (QRO review) and especially single “Genesis”.  Plus everything electronic is huge in music these days, though it can often suffer live (especially outdoors, in any sort of natural light), as the solo artist can come off as just a DJ pushing buttons (see: Justice – QRO photos).  Grimes squared that circle by bringing dancers – and bubbles.  It wasn’t quite the man in a monkey suit of Black Moth Super Rainbow a few years ago at Pier 17 (QRO live review), but Grimes did deliver a beautiful set, that, yes, included “Genesis”, as well as an encore return with “Nightmusic” (which still sort of sounds like a remix of “Mickey”…). 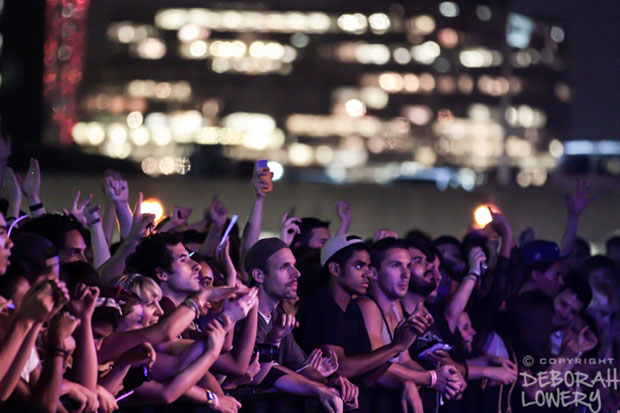 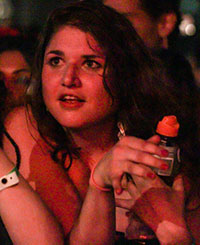 RiverRocks is only three shows, spread over less than a month, so is always a bit of a shaky proposition – though not as shaky as Pier 54.  The move to Pier 84 made it shakier still, and then this summer’s crazy weather knocked out one of the three shows.  But the Hudson never quits, and neither does Hudson River Park’s RiverRocks. 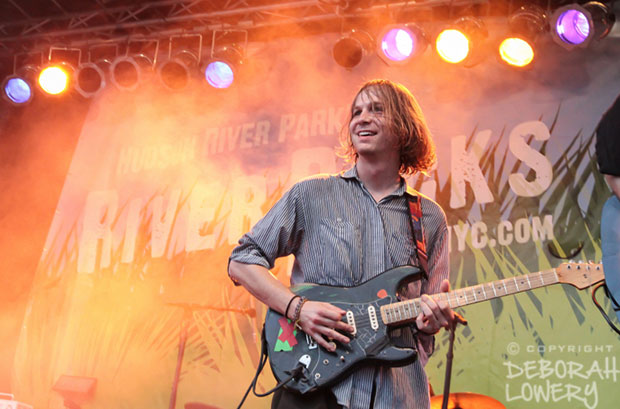