Whether you like it or not, definition-of-hipster website Pitchfork has been a tastemaker for years, even after it got bought by Conde Nast. Maybe the best expression of that... 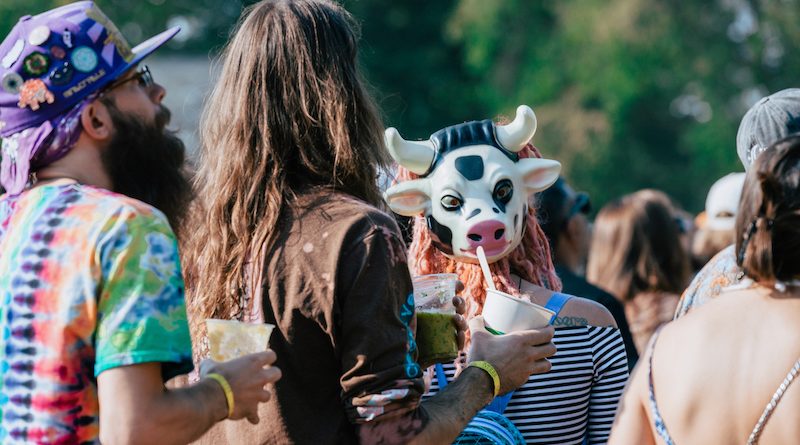 The festival officially started with Armand Hammer on the Green Stage, but the less said about their avant-jazz/hip-hop, the better. The true kick-off was with the kick-ass punk-metal of Michigan’s Dogleg on the Red Stage, loud & proud. It’s long been easy to say that punk’s dead, and it was great to see some young punks having fun.

It was also great to see an act who’d gotten some buzz during the no-show lockdown be able to carry it to a live audience. Chicago’s surf-rock Dehd got Pitchfork’s ‘Best New Music’ designation with last year’s Flower of Devotion, and that flower hadn’t wilted, with an audience at the Green Stage, sizable for how early it was, knowing the songs – sometimes more than the band did, as singer/bassist Emily Kempf would later admit to messing up some lyrics, “But the crowd got them right…” On the other hand, DJ Nate didn’t even show up for his slot on the Blue Stage (but considering his later set at the DoorDash space, perhaps that was for the best…).

Another, longer Pitchfork critical favorite, Hop Along, hopped up on the Red Stage. One can see why they’re loved by the literati, a nice mix of indie-rock and sad twang, without going overboard. They’ve also got more than ten years of music, from the more recent “This next song’s about two people who don’t respect each other” “Simple” to closing with 2012 crowd-pleaser “Tibetan Pop Stars”. Meanwhile, there was another, softer DJ at the Blue Stage, in The Soft Pink Truth.

The ‘arty vs. accessible’ push-pull is as old as art, and was certainly on display at Pitchfork ’21. You could practically hear critics call black midi’s set “angular,” definitely experimental, with everything from saxophone to wicker chairs up there on the Green Stage. Yes, interesting, but it did wear after a while.

One of the big stories going into Pitchfork ’21 was the return of The Fiery Furnaces. Siblings Eleanor & Matthew Friedberger went on a hiatus way back in 2011, and it actually stuck, until this year, with their reunion naturally starting at Pitchfork. However, they have not lost their own conceptual nature that divided critics way back when. Indeed, memory might have softened their edges in fans-from-then’s mind, but their Red Stage set certainly reminded ears.

The Blue Stage finally kicked into gear with a refreshing set from Ela Minus. Later there, Kelly Lee Owens brought her Welsh electronica for more of a mood music type of performance, Owens multi-instrumentaling all over the place. And that stage closed with Yaeji, who also exceeded her DJ origins by taking the mike and more, closing with a sing-along for “raingurl” and exclaiming, “Thank you, Chicago! Thank you, Pitchfork! Everyone here is ‘Best New Music!”

Putting their own electronic spin on experimental was Animal Collective at the Green Stage. Often, electronics wilt in the daylight, and the Baltimore group have had that problem in the past, but by this point, they’re experienced veterans, and it shows. They were also having fun up there, enjoying their own return to the stage, and at one of the best places for them to do it (Pitchfork has long supported the group). Still a little odd, sure, but the Collective wouldn’t have it any other way.

Closing out the Red Stage on Day One was Big Thief. Mixing heartbreak with twang and some big breakdowns, this was another artist that the hoi polloi might not know, yet drew a sizable crowd (having an overlapping crowd area with the headlining stage didn’t hurt, either).

But, let’s face it, you came to Pitchfork Friday, perhaps even Pitchfork Festival in total, for your quarantine crush: Phoebe Bridgers. Last year, she broke through from critical acclaim to worldwide fame – and even more critical acclaim – with the wonderful Punisher (QRO review). Okay, she didn’t win any Grammys (though got a bunch of nominations), but she won our hearts with such songs as “I See You” (QRO review), “I Know the End” (QRO review), and “Savior Complex” (QRO review), not to mention her oh-so-charming demeanor – and outfits, from her at-home performances in pajamas to her now-iconic skeleton onesie. She’s the 2021 artist you can bond over loving with your uncle, or with your niece.

The one thing you hadn’t been able to do was see Bridgers in-person, but she’s thankfully finally headed out on a tour (QRO’s live review from the weekend prior). The crowd was with Bridgers & co. (all in their skeleton onesies that you hope they get cleaned regularly) from the start, who opened with 2017’s “Motion Sickness”, the song that got all the people who were into her before you, into her. And then there was “Kyoto”, practically the pop song of 2020, that on its own justified going back out into a crowd.

But what’s actually notable about Punisher and its success is that it’s a highly successful sad album, all full of quiet heartbreak, the kind that the cool kids used to make fun. For many of the pieces, the sing-along was as loud as Bridgers, like “Garden Song” or “Savior Complex”. She was even able to bring in a piece from her side-supergroup with Julien Baker & Lucy Dacus, boygenius, with “Me & My Dog” – not to mention covering Bo Burnham’s “That Funny Feeling” (the idea of covering the comedian/musician is a little divisive among Bridgers’ fans, but not her cover). The crowd even broke into a short shout-along for the line “Cause fuck the cops” in “Smoke Signals”, proving just how well they knew her music.

Land of Talk – “Weight of That Weekend”