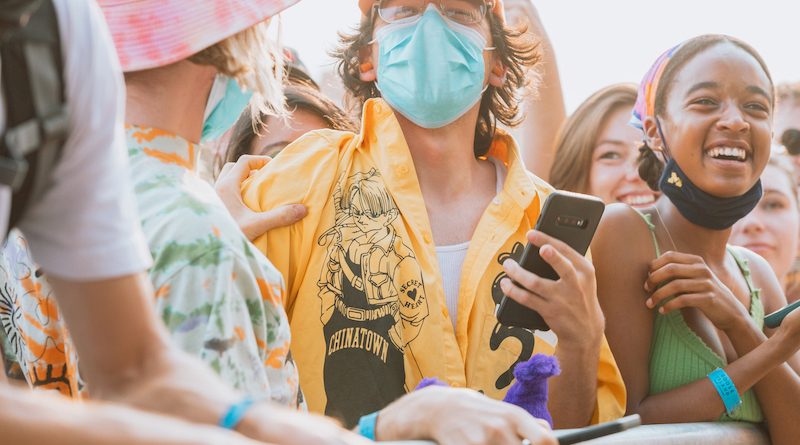 For the final day of Pitchfork ’21, it certainly felt hotter, though some of that might have been the increased dust from the worked-over field. Just another reason to wear a mask…

Still, it was a wild start with the likes of Special Interest on the Red Stage, with a wild, photogenic frontwoman, and a mosh pit broke out. Meanwhile, oso oso brought free jazz to the Blue Stage, because sure, why not?

Then things took a smoother turn, with the R&B rhymes of Mariah the Scientist on the Red Stage. One of the rising Pitchfork favorites at the festival was The Weather Station, whose relaxed alt-country twang glided into smoother sounds (including blocks & wind instruments) with skill on the Blue Stage. Main woman Tamara Lindeman joked about being over-volumed by Caroline Polachek on the Green Stage, “I hate to compete, but…” adding, “Much love to Caroline.” Polachek drew a big crowd for her own return to Pitchfork, after her Chairlift days. Her airy electronica was very washing, but given energy by her presence on stage.

The Sunday same-set-time-overlap was Thundercat on the Red Stage vs. Yves Tumor on the Blue. Thundercat certainly went balls-out, including handling a busted amp by putting a new amp on top of it, to wild applause. But all wild was Yves Tumor, a rapper towering at like 6’ 7” with a full-on metal band, the crowd & the frontman eating it all up.

Also wild from the get-go was the self-described “Black Brad Pitt,” rapper Danny Brown, “smoking & drinking” at the Green Stage. He remarked that he didn’t know the lyrics to some of his new stuff, because over the COVID break, instead of practicing he was using his new air fryer, “I air fry things you’re not supposed to air fry…” But if you weren’t up for that, you could go the opposite direction and take it mellow with Andy Shauf on the Blue Stage.

Of course, it was a giant light show for renowned DJ Flying Lotus, lighting up the close of the Red Stage from his raised platform. He even had the crowd to chant, “FUCK COVID!” twice, because he was unimpressed with the first chant, “It sounds like you still kinda like it…” And of course, it was dim, only red lighting for Cat Power to close the Blue Stage, because while the mercurial singer might have sounded great, she seemingly never wants anyone to take a photo of her.

And of course, Erykah Badu was almost a half-hour late to her Green Stage performance that would close out Pitchfork ’21. Badu is notorious for the diva action, but she does have the power to go full-on when she finally gets on, grooving soul and dance to end the weekend on a high note.