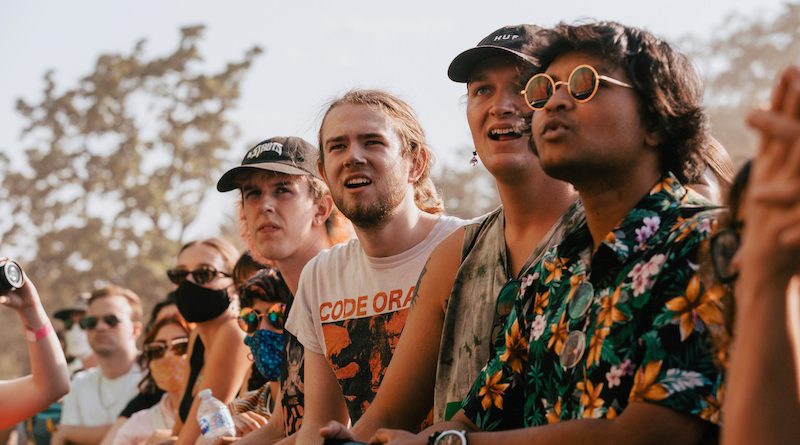 The temperatures increased on Saturday, as did the crowds. It worked for the airy & tropical Divino Niño on the Green Stage, and gave rapper Maxo Kream an excuse to take his shirt of at the Blue Stage. Meanwhile, Amaarae brought rhymes & a free jazz feel to the Red Stage.

The alt-country twang of Waxahatchee has long been a Pitchfork favorite (QRO photos at a Pitchfork event), so it was no surprise she brought it on the Green Stage. And it was a good time of the day for her relaxed and enjoyable music, when the heat was getting to you a bit, and you don’t want to rock. On the other hand, Jay Electronica’s last-minute cancellation pushed up most of the acts at the Blue Stage, so if you headed over there for Faye Webster, you got the last-minute add of DJ/producer RP Boo.

Faye Webster’s actual Blue Stage set was bumped up so that it was the same exact time as Ty Segall on the Red Stage, a rare full overlap at Pitchfork Festival. Segall brought his raw rock, and it was about time that some psych-rock came to the fest, his own brand of experimental (which included him hilariously harmonizing with Katie Crutchfield of Waxahatchee at one point). Meanwhile, Webster’s set was a much smoother, low-key counterpoint to the rawk (though at times Segall’s volume could carry across the farther stage in relatively tight Union Park).

But if you really wanted experimental rock, and Pitchfork Festival is certainly the place for it, why not go to one of the O.G.s of experimental, Kim Gordon? The once-and-forever Sonic Youth (and we’re all #TeamKim after her divorce from her erstwhile bandmate), and if you weren’t into Sonic Youth, you pretty much still had to check her out if you were going to Pitchfork ’21. Gordon still flies the flag of the NYC eighties No Wave scene noise-rock, and while she might not be easy to get into if you just know her name & reputation (kind of always the same issue with Sonic Youth), she’s also a compelling frontwoman – and just a legend.

On the other hand, there was Georgia Anne Muldrow, also bumped up on the Blue Stage. She was really experimental, with “bleeps and bloops” as Marge Simpson might say, doing a sort of extended mixtape improv. If you were into it, okay, but otherwise it put off (not to mention a crew member standing mere feet from Muldrow & keyboard, looking intently at it like it was expected that the whole thing, or Muldrow herself, could fall apart at any minute).

While Jamila Woods took over Jay Electronica’s headline slot at the Blue Stage, Angel Olsen played her first show in two years (likely true for a lot of the artists at Pitchfork ’21) on the Red Stage. She had already been growing, but 2019’s All Mirrors (QRO review) really saw her build her audience, and there was a big crowd for her on Saturday night. Olsen was also in good spirits, joking about one song that she only ‘sort of’ taught her band. And she closed her set with Pitchfork’s big (if not well-kept) surprise guest star, Sharon Van Etten, who came on for their hit team-up this year, the heartfelt country-resign, “Like I Used To” (QRO review).

And to headline the night on the Green Stage was another angel, Annie Clark, a.k.a. the divine St. Vincent. This year saw her release her latest record, Daddy’s Home (QRO review), and take on her latest persona, full-on seventies. Like actual seventies-er David Bowie, Clark has switched styles and profiles record-to-record, going from the Aeon Flux neo-future of 2017’s MASSEDUCTION (QRO review) to now having Madonna-esque hair and back-up singers with afros. The Saturday Pitchfork ’21 headline slot was so persona-driven that it started with a St. Vincent look-alike coming on & joining the band + back-up singers, before Clark herself appeared atop her rotating mini-stage.

Indeed, it was clear that Clark had organized and choregraphed every moment of her set, not a new strategy for her, but never to this extent. The back-up singers had synchronized moves for practically every song that they were on, including singing with backs to the crowd, their faces to the mirrors on the mini-stage behind them, for “Actor Out of Work” (even though it’s off of Clark’s Actor from way back in 2009 – QRO review). Even the main crew member was in costume, as a diner waitress, whether handing Clark a guitar or the band a drink (the latter during “…At the Holiday Party”).

This is not to say it all took away from the great songs. Instead, it made the whole thing feel special – even if she’s probably doing similar moves throughout this Daddy tour, likely not again after that, likely not again in Chicago. Plus, her back-up singers were great, both in harmonies and on-stage presence, and were different enough from Clark herself or the band so as not to compete or copy.

Also, Clark was able to both deliver the new songs that hadn’t been on the road before, like “Holiday Party” or “Daddy’s Home”, but also older pieces such as “Actor” or a killer “Los Ageless”. Before “Ageless”, she took a faux phone call from her sister (on an old landline, of course), where Clark heard a rating of the crowd that was a joke about Pitchfork’s own middling review of Daddy’s Home, “You would only give them a 6.8?” But then she got the crowd to cheer, adding, “I know, I know, Best New Crowd.”

And of special note on this day, the otherwise largely unremarked-at-Pitchfork twentieth anniversary of 9/11, was St. Vincent’s own “New York”. Done stripped down like on remix record Mass Education (QRO review) and Clark’s recent livestream (QRO livestream review), the rotating mini-stage turned to show a skyscraper backdrop as Clark sang largely on her own. The ode to her adopted hometown, and leaving the town, losing your “old crew down on Astor,” really hit home on this night (especially if you were a twenty-year NYC native in Chicago this night, like your correspondent…).

Land of Talk – “Weight of That Weekend”