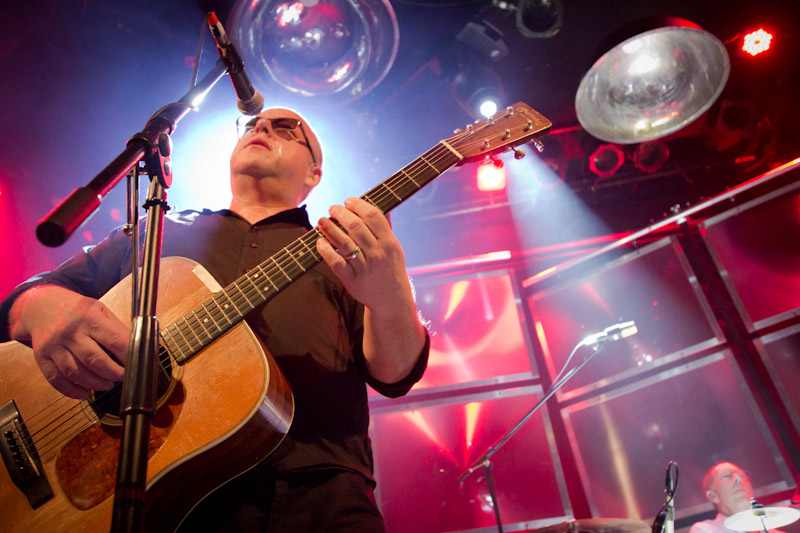 Click here for photos of Pixies at Fox Theater in Oakland, CA on February 21st, 2014 in the QRO Concert Photo Gallery

Click here for photos of Pixies at Orpheum Theatre in Boston, MA on January 18th, 2014 in the QRO Concert Photo Gallery

Click here for photos of Pixies at House of Blues Foundation Room in Boston, MA on January 18th, 2014 in the QRO Concert Photo Gallery

Click here for photos of Pixies at Olympia in Dublin, Ireland on November 18th, 2013 in the QRO Concert Photo Gallery

Click here for QRO’s review of Pixies at Paramount Theatre in Huntington, NY on November 5th, 2011

Click here for photos of Pixies at Troubadour in Los Angeles, CA on November 5th, 2009 in the QRO Concert Photo Gallery

At the Coachella music festival in 2004, the alt-world was wowed when the impossible happened: the Pixies reunited.  Singer/guitarist Black Francis and singer/bassist Kim Deal had split in 1993, just as alternative music was breaking through into the mainstream consciousness.  Both had successful post-Pixies careers, Francis as ‘Frank Black’ (QRO solo live review), and Kim Deal fronting The Breeders (QRO live review), and it seemed like this was yet another great band that you’d never get a chance to see again (or at all, if you’d missed them then).  But the Pixies’ music stayed relevant, cited by more musicians than you can shake a stick at, and somehow Deal & Francis buried the hatchet to headline Coachella – and started this century/millennium’s tradition of alt-acts getting back together.

However, starting that trend meant that the Pixies couldn’t help but fall behind this new wave, as other groups not only reunited, but also started releasing brand-spanking new music, while the Pixies were still just playing the classics.  For instance, fellow Massachusetts contemporaries Dinosaur Jr. (QRO live review) first saw singer/guitar J Mascis (QRO solo album review) and singer/bassist Lou Barlow (QRO solo album review) bridge their differences to tour the re-release of their early albums – but then started putting out new material that was just as good as the old, beginning with 2007’s Beyond (QRO review) and beyond; meanwhile, the Pixies toured the twentieth anniversary of Doolittle (QRO live review).  An amazing record, no doubt, but wags began sniping that the Pixies were just a nostalgia act.

Well, the Pixies have flipped the script in more ways than one in 2013, including playing a series of club shows, first in Los Angeles then New York, like at Bowery Ballroom on Wednesday, September 18th.  They’ve also got a new band member – and new music!

It was a very tightly packed, clearly sold-out Bowery Ballroom (QRO venue review).  Partly that was due to the band’s mammoth amount of equipment, which spread far out from the stage floor’s house-left front corner.  Usually that’s just where the opener stores their equipment after performing (swapping places with the headliner’s stuff), but this night it was not only that Pixies cases were stacked on the floor while the band played, as they also had a second soundman perched atop some cases and in front of his own soundboard.  And when you add in the sold-out crowd (it’s doubtful that Bowery lowered how many tickets they would sell, due to the small floor space for fans), it made for an audience who stretched back to and even, sometimes, on the balcony stairs (to say nothing of the also-packed balcony).  Still, even if you were in way back, it was closer than all but a few would get to the Pixies at a regular show of theirs. 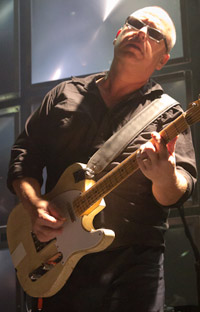 It was also interesting to note that the crowd was a wide mix of ages.  The Pixies may have broken up twenty years ago, but lots of people too young to catch them then, from nineties grungers to today’s hipsters, know & love the band.  The internet and iTunes may have made it a lot harder to make money off record sales, but it is definitely easier for people to discover not just new music but old music as well – no longer relying on word-of-mouth recommendations or searching through record bins, now you can just go online to hear about any type/time of music, and get it.  The age range did go from older to younger as one got close to the front – Williamsburg hipsters pushed up to the stage, while Park Slope parents hung in the back.

Up on that stage was Black Francis (who returned to that version of the name when the Pixies first reunited) in center, guitarist Joey Santiago to the house-left, drummer David Lovering in the back (like any drummer), and new bassist Kim Shattuck (of The Muffs) on house-right.  The Deal-Francis re-cohabitation was always a ticking time bomb; in many ways, it was surprising how long it did last, to earlier this year, when Deal left.  But did the band have to recruit a literal new ‘Kim’?  It makes the comparisons even more constant, but Shattuck certainly held up her end of the deal (no pun intended).  Indeed, her voice sounded slightly more seductive than Deal’s had on the key female vocal moments – but maybe that’s just the blond streak in her hair…

And the Pixies were always a Francis-fronted act, but Lovering & Santiago were not cloaked in darkness.  Part of that was because the stage was just seriously lit up, as the band brought the light show that they used in bigger spaces & stages – it was to the point where it even hit the guitar tech/roadie to far house-left, there to switch out and tune guitars; he looked like he was another member of the band.  Still, Santiago was at the forefront of the sound, and Lovering even got his chance to shine on vocals during the title chorus of “La La Love You”, where Francis stepped back so the audience could see all Santiago was saying at his drum set mike. 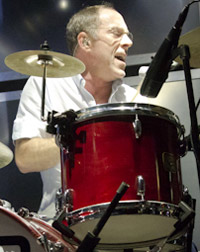 The set list (QRO photo) was 25 songs long, with no encore, and the Pixies stuck to it, save for replacing “The Sad Punk” with “Tame”, thanks to a “special request.”  While there’s absolutely nothing wrong with the shouts of “Tame”, “Sad Punk” would have been the only song on the set list from Pixies’ last full-length, 1991’s Trompe Le Monde; instead there was none.  That record has gotten some flack from Pixies aficionados, who prefer the band’s earlier stuff (of course…), but in reality it’s one of their strongest, and while no one was expecting them to play its cover of The Jesus & Mary Chain’s “Head On” (as great as that song is, original or Trompe), it would have been nice had something from it been featured at the show.

Of course, with a Pixies show, there are always going to be lots of songs that you wished that they’d played – too many to fit in even a 25-song set list.  For instance, though an old-heavy set list that night, there was no “Holiday Song” from 1987 debut Come On Pilgrim, or “Cactus” from the following year’s follow-up, Surfer Rosa (and they weren’t going to play Deal’s “Tony’s Theme”).  Also, oddly no “Debaser”, one of the singles from 1989’s Doolittle – and the two pieces from the next year’s Bossanova, “Ana” and “Blown Away”, weren’t the night’s best (that’s an album whose relative criticism is more deserved). 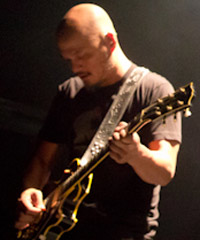 But enough about what wasn’t played; there was still a ton that was.  First and foremost, there were six-count-‘em-six new songs, with single “Bagboy” (their first new material in years, released just before Deal left the band), all four songs from this year’s EP1, and the not-yet-released “Green”.  The Pixies’ new material hasn’t been received with rapturous applause, but it’s always tough when a beloved old band puts out their first new material in a long while.  The new songs are darker and harder than the band’s original pop, but still definitely Pixies – Santiago, for one, is still on line & on form.  They also sounded better live than on record, possibly because the band was more excited to play the new stuff, possibly because the older stuff has a much higher bar to meet.

Not that the Pixies didn’t meet that high bar.  From opener “Levitate Me” to closer “Where Is My Mind?”, every song you’ve loved for decades was just as great as you remembered it.  Highlights of the highlight set included the back-to-back-to-back of Surfer’s “Bone Machine”, “Break My Body”, and “Broken Face” (though the band probably didn’t need to play also-Surfer, also-“B” instrumental “Brick Is Red” just before those & as second song of the night), Lovering’s “La La Love You”, crowd sing-a-longs to classic singles “Here Comes Your Man” & “Monkey Gone To Heaven”, the delicious lyrics to “I’ve Been Tired” (they involve losing one’s penis to a whore with disease…), and more.  “Tired” or “Mr. Grieves” might have been the surprise of the night, but can one really pick and choose among so many great songs?

After wrapping up these club dates in New York, the Pixies head out on an extensive, month-long Western European tour (they even hit tiny Luxembourg!) that begins & ends in London, September 25th to October 25th, and they’ll surely be back in America at some point, probably behind a new record and certainly at bigger venues – but nothing will be quite like seeing them up close & personal. 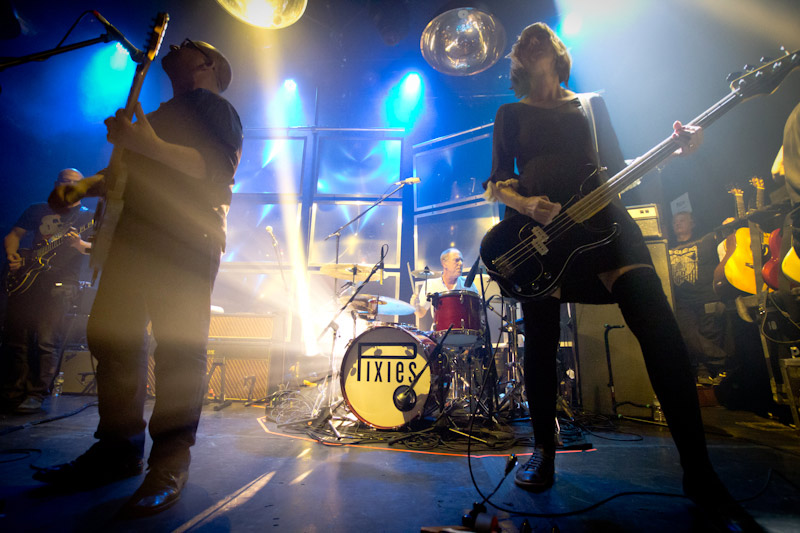