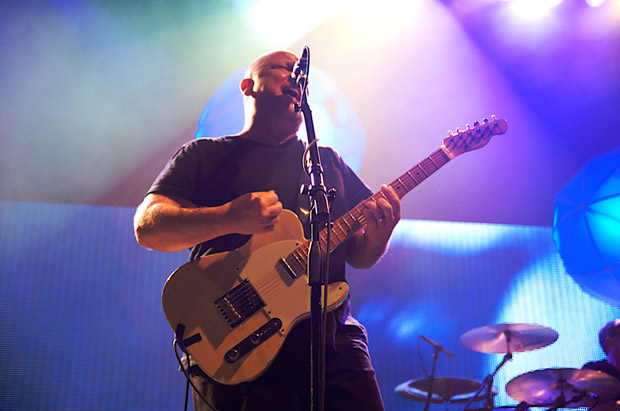 Click here for QRO’s review of Pixies on the Doolittle tour at Moncton Casino in Moncton, NB, Canada on April 10th, 2011

Click here for QRO’s review of Pixies on this tour at Rimac Stage in San Diego, CA on September 26th, 2010

“I’ve never been here, is it nice??” posed Pixies bassist Kim Deal to a packed crowd at Huntington Long Island’s Paramount Theatre on Saturday, November 5th.  The alt-rock legends made a stop at the newly opened venue (QRO venue review) on a tour of cities they haven’t previously visited.

With only one album (QRO review), a handful of 7″s, and their new EP Tarot Classics under their belt, Surfer Blood opened the show with a relatively short set (QRO photos).  Though they may be baby faced, the band are quickly finding their footing, blending sounds from surf bands and ‘90s rock.  With The Pixies sound being an obvious influence, the band served as a fitting opener.

Pixies made a dramatic entrance after showing Luis Bunuel and Salvador Dali’s short film Un Chien Andalou on several screens around the stage.  After opening with several b-sides, they ripped through their classic album Doolittle in its entirety, from “Debaser” to “Gouge Away”, with little stage banter except from Deal.  The crowd didn’t seem to mind though, as they screamed along to “Monkey Gone to Heaven” and “La La Love You”, which the band dedicated to all the ladies of Huntington.  “Hey” inspired lots of bad, drunken, ‘sexy’ dancing.  The band closed their set with two encores, playing non-Doolittle favorites “Wave of Mutilation (UK Surf)”, “Into the White”, “Vamos”, “Nimrod’s Son” and “Where Is My Mind?”