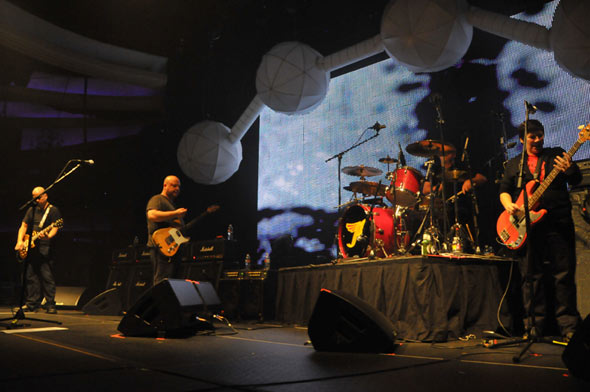 Click here QRO’s review of Pixies on the Doolittle tour at Rimac stage in San Diego, CA on September 26th, 2010

While “Who is/was this opening band?” were the questions on most people’s minds at the Pixies’ Sunday, April 10th show at the Moncton Casino in Moncton, Canada, the two had very different connotations.  Despite very kind words from major Canadian press outlets like The National Post, Manitoba’s Imaginary Cities have managed to fly under the radar, albeit with an increasingly devoted fan base.  Luckily for concertgoers, their support set for The Pixies demonstrated why that following is growing exponentially, and why the acclaim for their debut LP Temporary Resident has been so far reaching.

The band kicked off their rare East Coast visit with the slick bass lines and crafty piano that made that album such a pop tour de force.  “Where’d All The Living Go” and “Say You” where perhaps the best examples of this, and the growing crowd began to loosen up amidst some really catchy vibes.  While a gentle cover of CAKE’s (QRO live review) “Mexico” mellowed things out a bit, the song reinforced the band’s best feature, namely the voice of Marti Sarbit.  Her elegant, aged sounding vocals made even the stiffest audience members swoon, especially on lines like, “Oh baby, I was bound for Mexico / Oh baby, I was bound to let you go.”

From there, it was time for Temporary Resident‘s two real highlights.  First, the fast paced, pop prowess of “Hummingbird” brought the dance party to its peak, amid some of the catchiest hooks in recent memory.  Then, the title track – which peaked in its closing cries of “take him away from me,” – cemented the set as fantastic, and the band’s outlook as quite bright, indeed.

After a timely intermission, the lights dimmed, and a truly dark orchestral piece began to play through the PA.  The mammoth screens behind the stage lit up with a macabre black and white film montage, one that was allegedly put together many years ago by Salvador Dali.  After minutes and minutes on end, The Pixies took the stage at the Moncton Casino and drove into some lesser-known material in the course of rampant applause.

Kicking the show off with “Manta Ray,” and then falling into songs that escaped some of the most rampant Pixies fans, the band soon stopped dead in its tracks.  As a “Doolittle” banner crossed the screen, Kim Deal proclaimed “No more b-sides,” and her bass soon fired into the riff to “Debaser”.  While there were a few kinky moments – Black Francis’ “wa-ha-ha-hos” turning into a scary sort of scream – this was indeed the heart of the set.  For about twenty-five minutes, the band played the best of what is arguably their best work of music.  Doolittle classic “Wave of Mutilation” marked a mellowing out of sorts, while fan favourite “Here Comes Your Man” was delivered in an organic clarity that stood out among the rest of the set list.

After a blast of Doolittle, the band played through a medley of alt rock and punk standards from Bossanova and Trompe le Monde – although there were hints of Doolittle sprinkled throughout.  Whatever song they played, though, the members of Pixies remained tight and proficient, showing no wear or tear from their ages or residual break-up tensions.  The rest of the night featured highlights like “Hey” and “Letter to Memphis,” and the show culminated in a double encore featuring an alternate take of “Wave of Mutilation” and an amazing, though indiscernible Neil Young cover.  As the smoke cleared and the lights came back on, one thing became infinitely clear: The Pixies are back, and to solely say “they’ve still got it” would be a definite understatement.