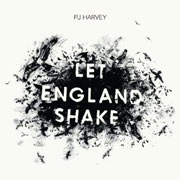 “These are the words / Words that maketh murder”

It is 2011 and PJ Harvey is pissed.  She’s at war, and her only weapon is her words.  Her new album Let England Shake marks a new turn in her career.  Recorded inside her hometown church with longtime collaborators John Parish and Mick Harvey (no relation), her eighth opus has paradoxically a World War II patriotic sound to it.

From the eerily poppy “Let England Shake” (“The West’s asleep, Let England shake / Weighted down with silent dead / I fear our blood won’t rise again”) to feisty “The Glorious Land” (“Our lands is ploughed by tanks and feet / Feet marching”) accompanied by a charging bugle, Harvey wants to pull her fellow countrymen out of their apathy and give the United Kingdom the status it once had.  Her message is meant to be a peaceful one though.  Her depiction of war in  “All and Everyone”, “In the Dark Places”, “Bitter Branches”, or “The Colour of the Earth” (featuring Mike Harvey) creates vivid snapshots: “I’ve seen and done things I want to forget / I’ve seen soldiers fall like lumps of meat / Blown and shot out beyond belief / Arms and legs were in the trees” (from “The Words That Maketh Murder” – the most political song of the album).  With such an abundance of thoughtful lyrics, it is hard to focus on anything else beyond the words – but that would be a mistake.

Click here for photos of PJ Harvey at 2011 All Tomorrow’s Parties: I’ll Be Your Mirror at Alexandra Palace in London, U.K. in the QRO Concert Photo Gallery

Click here for photos of PJ Harvey at 2011 Primavera Sound Festival in Barcelona, Spain in the QRO Concert Photo Gallery

Click here for photos of PJ Harvey at Terminal 5 in New York, NY on April 19th, 2011 in the QRO Concert Photo Gallery

Contrary to the minimalist White Chalk from 2007, Let England Shake has a musical depth and range that can’t be ignored.  The church’s natural reverb present through the album is an instrument in itself, added to the twenty or others used to record the dozen songs.  The style of each tune also reminds the audience that Harvey is a cross-scene artist that can pair a rock song like “Better Branches” next to a music box melody (you can almost picture it accompanying a dancing porcelain ballerina) in “Hanging In The Wire”.  Then another surprise follows with the tribal-Peter-Gabrielian “Written On The Forehead”.

Harvey’s short Let England Shake – only 41 minutes – is arguably the best and deepest album she has produced in the span of her twenty-year career.  It may also very well be, by the strength of its lyrics and musicality, one of the strongest albums of 2011.  Harvey is that ballerina leading the listeners from the hordes of commoners, while “Some of us returned / And some of us did not.”