It’s gloomy, late, and dark when the needle hits the record – you don’t necessarily need this atmosphere to appreciate Teenage Evil, but it helps.... 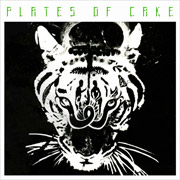 It’s gloomy, late, and dark when the needle hits the record – you don’t necessarily need this atmosphere to appreciate Teenage Evil, but it helps.  The album is a melodramatic affair, exactly the sort of thing that goes with adolescence and love (or the lack of it).  Nothing is more hopeless than knowing everything about everything, but not being a part of it.

After releasing a couple of solo albums on his own, Jonathan Byerley gathered his good friends to move from Colorado to Brooklyn to form Plates of Cake and release their first full length self-titled album three years ago.  Their latest, on Uninhabitable Mansions Records, serves up neo-psych tracks in low end darkness with contemporary shades of Interpol and the midnight drunken danger of The Pogues.  Frontman Byerley’s deep baritone sets the tone for this record, pairing those references with his laid back Leonard Cohen storyteller delivery.  Teenage Evil is also a close relative to the recent resurgence of pop-psych folk from the West Coast in bands like The Fresh & Only’s or White Fence.  But you’d have to go back further still to uncover all of the genres that they’re drawing from on this record.  Grounded in a straight ahead rock style, they offer tributes to Dylan and The Clash, similarly willing to try on styles and take chances under the umbrella of a strong songwriter’s voice.

Songs like “Hey, Hey, That’s Devotion” at first sound like Byerley’s take on a blue collar, Springsteen style rasp, but the band goes back further with The Clash’s reggae style rhythms.  The track turns from pop into a skittering R&B like London Calling’s “Brand New Cadillac”, with shades of a darker Dylan whose after that primal chaos that goes with love.  Let me list the ways as the song fades.  “That’s devotion” sarcastically suggests a misguided set of rules driven by immature feelings getting the better of us.  Byerley barely gets emotional in his delivery, rehearsing the motions of affection, which isn’t meant to be mistaken for apathy, just experienced reservation from someone who’s been through it all.

A perfect example of what they’re able to get away with running on pure style is the song “Transit Trials”.  A heavy, sustained guitar distortion rings out, leaving spaces for Byerley’s observations about commuting through the tunnels connecting NY and NJ.  Not really the thing memorable songs are made of, but they pull off the greater symbolism with nothing but attitude and melody, which after closer examination make this one of the best tracks on the record.

The NY, NJ transit trials / I’m conscious of the river on the other side / of the wall

“Underwater Moonlight”, a Soft Boys cover from the album of the same name, is probably the most direct evidence of their influences.  The Robyn Hitchcock-fronted record has since become a neo-psych landmark to everyone from The Replacements to R.E.M.  Byerley sticks to the somber direction of the original, singing over the beating heart rhythm, adopting retro-pop elements, the track exploding over and over with rolling snare, crackling distortions and a choir singing, “Moonlight!”

The b-side opens with “Teenage Evil”.  It’s dark in the desert and Byerley’s soulful delivery is again deadpan in what beginning to think is a conscious effort to make the listener work, offering no clue as to his judgment, no emotional neon signs.  The line between happiness and the great depression has the same wise, baritone delivery with time for a heated solo “…falling asleep to the smell of diesel fuel.”  The beefy ‘70s guitar lead sounds like a motorcycle hum.  Plates of Cake are broken-in leather, not trendy denim jackets, sticking to the classics instead of trying to be fashionable.

“As If the Choice Were Mine” is their sweeter side of psych with warm, blended vocal harmonies.  The catchiest of tracks, alternating between a delicate picked electric and crashing waves of distortion.  An homage to the disarming, sunny ‘50s surf sensibility while at the same time breaking down those rigid pop structures.  Not unlike that album from The Soft Boys, trends aren’t supposed to embrace Teenage Evil right off the bat, which is the perfect setup for an album worth coming back to long after the popular sounds of 2013 have faded away.