<img src="http://www.qromag.com/wp-content/uploads/2009/02/plushgunpinsandpanzers.jpg" alt=" " />Daniel Ingala can make even the most high school of subjects work with his indietronica.<br />... 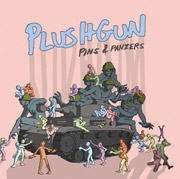 To an unheralded degree, indietronica rises and falls not just with its rhythm & tones, but also in the vocals.  When guitars don’t take center stage, vocals play an increasingly important role as the more familiar and accessible sonic terrain.  At his best as Plushgun, Williamsburg, Brooklyn’s Daniel Ingala employs all of these to pitch-perfect selection, overwhelming what, on its face, could be preening emo lyrics.

Ingala begins his debut full-length, Pins and Panzers, with not one, but two indietronica songs about high school, single “Dancing In a Minefield” and “How We Roll”.  Yet before you can bin this with Good Charlotte or Blink-182, the pressing beats and utter catch exceed any sophomoric content, to make for two tracks that one can’t help but love.  And yet Ingala manages to exceed those two not once, but twice, on “A Crush To Pass the Time” and “Union Pool”.  “Just a crush to pass the time” isn’t just an excellent line, but it takes the ‘just friends’ material into a slightly cutting arena, what the boy really thinks about the girl who just wants to be friends (almost like it was lifted from a classic eighties John Hughes movie).  That intelligent restraint also plays very well in the Casio-press of “Union Pool” – which is a little more mature, as it’s about the 21+ Brooklyn venue (QRO venue review).

Outside of those four tracks, the other six songs on Pins and Panzers do struggle to stand out.  The brightening effects of “Just Impolite” and finisher “An Aria” make them the ‘best of the rest’.  “The Dark In You”, “14 Candles”, and “Without a Light” never fall into any emo-trap, but also lack the hook of Ingala’s best work.  Meanwhile, “Let Me Kiss You (And I’ll Fade Away)” is at least remarkable in its Hawaiian ukulele aspects.

Since the future-Mrs.-Zooey Deschanel (of She & Him – QRO album review), Benjamin Gibbard (not ‘Him’, but of Death Cab For Cutie – QRO album review) sung so wonderfully about post-apocalyptica and nighttime Washington, D.C. as one-half of The Postal Service, vocals have played an important part in indietronica.  And Brooklyn’s had more than its fair share in that department, from Mixel Pixel (QRO album review) and cats to (former resident) Eric Elbogen (QRO interview) as Say Hi (QRO spotlight) and robots & vampires.  As Plushgun, Daniel Ingala can take the high school material you hate and turn it into songs you love on Pins and Panzers.